Hedge Funds Were Too Impatient with Zillow Group Inc (Z)

Although the masses and most of the financial media blame hedge funds for their exorbitant fee structure and disappointing performance, these investors have proved to have great stock picking abilities over the years (that’s why their assets under management continue to swell). We believe hedge fund sentiment should serve as a crucial tool of an individual investor’s stock selection process, as it may offer great insights of how the brightest minds of the finance industry feel about specific stocks. After all, these people have access to smartest analysts and expensive data/information sources that individual investors can’t match. So should one consider investing in Zillow Group Inc (NASDAQ:Z)? The smart money sentiment can provide an answer to this question.

Zillow Group Inc (NASDAQ:Z) investors should pay attention to a decrease in hedge fund sentiment lately. Our calculations also showed that Z isn’t among the 30 most popular stocks among hedge funds (click for Q3 rankings and see the video below for Q2 rankings). Hedge fund sentiment towards Zillow hit its all time high at the end of June. Around half of those funds that bought the stock during Q2 sold out of Zillow in Q3. They should have been a little more patient with Z.

Unlike the largest US hedge funds that are convinced Dow will soar past 40,000 or the world’s most bearish hedge fund that’s more convinced than ever that a crash is coming, our long-short investment strategy doesn’t rely on bull or bear markets to deliver double digit returns. We only rely on the best performing hedge funds‘ buy/sell signals. Let’s go over the key hedge fund action encompassing Zillow Group Inc (NASDAQ:Z).

How have hedgies been trading Zillow Group Inc (NASDAQ:Z)?

At Q3’s end, a total of 38 of the hedge funds tracked by Insider Monkey were long this stock, a change of -25% from one quarter earlier. By comparison, 22 hedge funds held shares or bullish call options in Z a year ago. With hedge funds’ sentiment swirling, there exists an “upper tier” of noteworthy hedge fund managers who were boosting their holdings substantially (or already accumulated large positions). 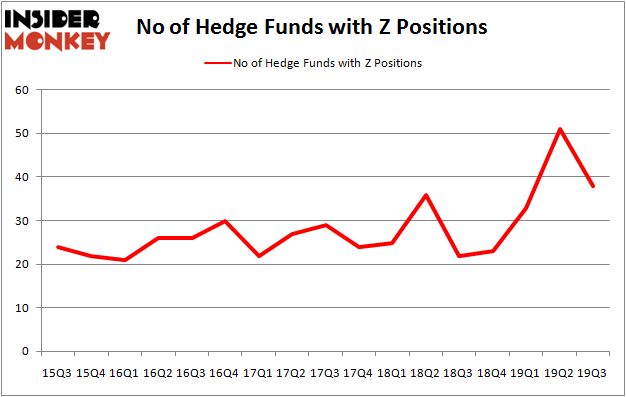 The largest stake in Zillow Group Inc (NASDAQ:Z) was held by SRS Investment Management, which reported holding $222.2 million worth of stock at the end of September. It was followed by Slate Path Capital with a $87.2 million position. Other investors bullish on the company included Eminence Capital, Teton Capital, and Matrix Capital Management. In terms of the portfolio weights assigned to each position Teton Capital allocated the biggest weight to Zillow Group Inc (NASDAQ:Z), around 12.41% of its portfolio. ThornTree Capital Partners is also relatively very bullish on the stock, dishing out 6.41 percent of its 13F equity portfolio to Z.

Since Zillow Group Inc (NASDAQ:Z) has witnessed declining sentiment from the smart money, we can see that there is a sect of funds that slashed their positions entirely heading into Q4. At the top of the heap, Josh Donfeld and David Rogers’s Castle Hook Partners dropped the largest stake of all the hedgies watched by Insider Monkey, valued at an estimated $60.5 million in stock, and Karthik Sarma’s SRS Investment Management was right behind this move, as the fund dropped about $41.6 million worth. These transactions are interesting, as total hedge fund interest fell by 13 funds heading into Q4.

As you can see these stocks had an average of 25.75 hedge funds with bullish positions and the average amount invested in these stocks was $322 million. That figure was $880 million in Z’s case. First Solar, Inc. (NASDAQ:FSLR) is the most popular stock in this table. On the other hand Flowserve Corporation (NYSE:FLS) is the least popular one with only 19 bullish hedge fund positions. Compared to these stocks Zillow Group Inc (NASDAQ:Z) is more popular among hedge funds. Our calculations showed that top 20 most popular stocks among hedge funds returned 37.4% in 2019 through the end of November and outperformed the S&P 500 ETF (SPY) by 9.9 percentage points. Hedge funds were also right about betting on Z as the stock returned 31.3% during the first two months of Q4 and outperformed the market by an even larger margin. Hedge funds were clearly right about piling into this stock relative to other stocks with similar market capitalizations.