In these volatile markets we scrutinize hedge fund filings to get a reading on which direction each stock might be going. We know that hedge funds generate strong, risk-adjusted returns over the long run, therefore imitating the picks that they are collectively bullish on can be a profitable strategy for retail investors. With billions of dollars in assets, smart money investors have to conduct complex analyses, spend many resources and use tools that are not always available for the general crowd. This doesn’t mean that they don’t have occasional colossal losses; they do (like Peltz’s recent General Electric losses). However, it is still a good idea to keep an eye on hedge fund activity. With this in mind, as the current round of 13F filings has just ended, let’s examine the smart money sentiment towards Hancock Whitney Corporation (NASDAQ:HWC).

Is Hancock Whitney Corporation (NASDAQ:HWC) an outstanding investment today? Investors who are in the know are getting less bullish. The number of long hedge fund positions dropped by 4 lately. Our calculations also showed that HWC isn’t among the 30 most popular stocks among hedge funds (click for Q4 rankings and see the video at the end of this article for Q3 rankings). HWC was in 16 hedge funds’ portfolios at the end of the fourth quarter of 2019. There were 20 hedge funds in our database with HWC positions at the end of the previous quarter.

If you’d ask most market participants, hedge funds are viewed as worthless, outdated financial tools of years past. While there are greater than 8000 funds with their doors open today, Our experts choose to focus on the upper echelon of this group, approximately 850 funds. These investment experts handle bulk of the hedge fund industry’s total capital, and by watching their first-class investments, Insider Monkey has figured out a number of investment strategies that have historically outrun the market. Insider Monkey’s flagship short hedge fund strategy outpaced the S&P 500 short ETFs by around 20 percentage points annually since its inception in March 2017. Our portfolio of short stocks lost 35.3% since February 2017 (through March 3rd) even though the market was up more than 35% during the same period. We just shared a list of 7 short targets in our latest quarterly update .

We leave no stone unturned when looking for the next great investment idea. For example we recently identified a stock that trades 25% below the net cash on its balance sheet. We read hedge fund investor letters and listen to stock pitches at hedge fund conferences, and go through short-term trade recommendations like this one. We even check out the recommendations of services with hard to believe track records. Our best call in 2020 was shorting the market when S&P 500 was trading at 3150 after realizing the coronavirus pandemic’s significance before most investors. Keeping this in mind let’s take a peek at the new hedge fund action surrounding Hancock Whitney Corporation (NASDAQ:HWC).

Heading into the first quarter of 2020, a total of 16 of the hedge funds tracked by Insider Monkey held long positions in this stock, a change of -20% from one quarter earlier. Below, you can check out the change in hedge fund sentiment towards HWC over the last 18 quarters. So, let’s find out which hedge funds were among the top holders of the stock and which hedge funds were making big moves. 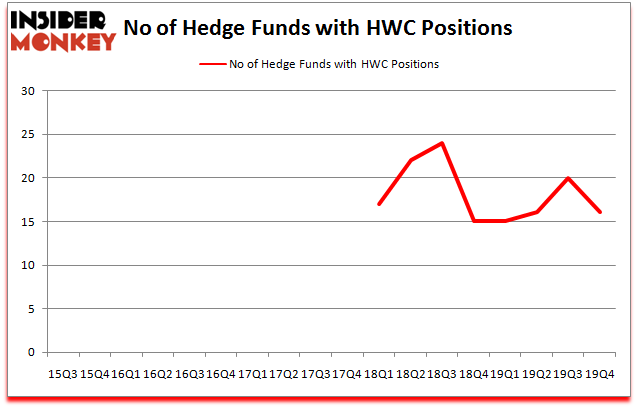 According to Insider Monkey’s hedge fund database, Paul Magidson, Jonathan Cohen. And Ostrom Enders’s Castine Capital Management has the biggest position in Hancock Whitney Corporation (NASDAQ:HWC), worth close to $16.9 million, accounting for 4.3% of its total 13F portfolio. Sitting at the No. 2 spot is Forest Hill Capital, managed by Mark Lee, which holds a $12.4 million position; the fund has 4.1% of its 13F portfolio invested in the stock. Other hedge funds and institutional investors that hold long positions comprise Emanuel J. Friedman’s EJF Capital, Jeffrey Hinkle’s Shoals Capital Management and Daniel Johnson’s Gillson Capital. In terms of the portfolio weights assigned to each position Shoals Capital Management allocated the biggest weight to Hancock Whitney Corporation (NASDAQ:HWC), around 7.94% of its 13F portfolio. Castine Capital Management is also relatively very bullish on the stock, setting aside 4.26 percent of its 13F equity portfolio to HWC.

Judging by the fact that Hancock Whitney Corporation (NASDAQ:HWC) has experienced bearish sentiment from the smart money, we can see that there lies a certain “tier” of funds that decided to sell off their entire stakes heading into Q4. It’s worth mentioning that Matthew Lindenbaum’s Basswood Capital dumped the biggest stake of the 750 funds tracked by Insider Monkey, comprising close to $15.8 million in stock. Dmitry Balyasny’s fund, Balyasny Asset Management, also dumped its stock, about $10.7 million worth. These bearish behaviors are important to note, as aggregate hedge fund interest fell by 4 funds heading into Q4.

As you can see these stocks had an average of 25.25 hedge funds with bullish positions and the average amount invested in these stocks was $296 million. That figure was $71 million in HWC’s case. Six Flags Entertainment Corp (NYSE:SIX) is the most popular stock in this table. On the other hand Ormat Technologies, Inc. (NYSE:ORA) is the least popular one with only 16 bullish hedge fund positions. Compared to these stocks Hancock Whitney Corporation (NASDAQ:HWC) is even less popular than ORA. Hedge funds dodged a bullet by taking a bearish stance towards HWC. Our calculations showed that the top 20 most popular hedge fund stocks returned 41.3% in 2019 and outperformed the S&P 500 ETF (SPY) by 10.1 percentage points. These stocks lost 17.4% in 2020 through March 25th but managed to beat the market by 5.5 percentage points. Unfortunately HWC wasn’t nearly as popular as these 20 stocks (hedge fund sentiment was very bearish); HWC investors were disappointed as the stock returned -56.2% during the same time period and underperformed the market. If you are interested in investing in large cap stocks with huge upside potential, you should check out the top 20 most popular stocks among hedge funds as most of these stocks already outperformed the market so far in Q1.