Hedge Funds Were Dumping AT&T Inc. (T) Even Before Coronavirus

Coronavirus is probably the #1 concern in investors’ minds right now. It should be. On February 27th we published this article and predicted that US stocks will go down by at least 20% in the next 3-6 months. We also told you to short the market ETFs and buy long-term bonds. Investors who agreed with us and replicated these trades are up double digits whereas the market is down double digits. In these volatile markets we scrutinize hedge fund filings to get a reading on which direction each stock might be going. Most investors tend to think that hedge funds and other asset managers are worthless, as they cannot beat even simple index fund portfolios. In fact, most people expect hedge funds to compete with and outperform the bull market that we have witnessed in recent years. However, hedge funds are generally partially hedged and aim at delivering attractive risk-adjusted returns rather than following the ups and downs of equity markets hoping that they will outperform the broader market. Our research shows that certain hedge funds do have great stock picking skills (and we can identify these hedge funds in advance pretty accurately), so let’s take a glance at the smart money sentiment towards AT&T Inc. (NYSE:T).

AT&T Inc. (NYSE:T) was in 50 hedge funds’ portfolios at the end of December. T investors should pay attention to a decrease in enthusiasm from smart money in recent months. There were 51 hedge funds in our database with T holdings at the end of the previous quarter. Our calculations also showed that T isn’t among the 30 most popular stocks among hedge funds (click for Q4 rankings and see the video below for Q3 rankings).

According to most shareholders, hedge funds are seen as unimportant, outdated financial tools of the past. While there are over 8000 funds with their doors open at the moment, Our experts look at the aristocrats of this group, approximately 850 funds. These money managers oversee the majority of the hedge fund industry’s total capital, and by tailing their unrivaled stock picks, Insider Monkey has unsheathed a few investment strategies that have historically outpaced the market. Insider Monkey’s flagship short hedge fund strategy defeated the S&P 500 short ETFs by around 20 percentage points annually since its inception in March 2017. Our portfolio of short stocks lost 35.3% since February 2017 (through March 3rd) even though the market was up more than 35% during the same period. We just shared a list of 7 short targets in our latest quarterly update .

We leave no stone unturned when looking for the next great investment idea. For example Europe is set to become the world’s largest cannabis market, so we check out this European marijuana stock pitch. We read hedge fund investor letters and listen to stock pitches at hedge fund conferences, and and go through short-term trade recommendations like this one. We even check out the recommendations of services with hard to believe track records. In January, we recommended a long position in one of the most shorted stocks in the market, and that stock returned more than 50% despite the large losses in the market since our recommendation. With all of this in mind we’re going to take a peek at the fresh hedge fund action encompassing AT&T Inc. (NYSE:T).

Heading into the first quarter of 2020, a total of 50 of the hedge funds tracked by Insider Monkey held long positions in this stock, a change of -2% from one quarter earlier. On the other hand, there were a total of 56 hedge funds with a bullish position in T a year ago. With the smart money’s sentiment swirling, there exists a select group of key hedge fund managers who were increasing their holdings substantially (or already accumulated large positions). 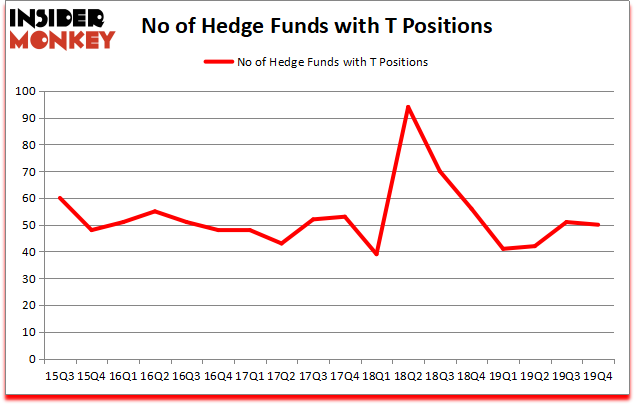 The largest stake in AT&T Inc. (NYSE:T) was held by Elliott Management, which reported holding $791.4 million worth of stock at the end of September. It was followed by Adage Capital Management with a $324.4 million position. Other investors bullish on the company included Citadel Investment Group, Elliott Management, and AQR Capital Management. In terms of the portfolio weights assigned to each position Mountain Road Advisors allocated the biggest weight to AT&T Inc. (NYSE:T), around 6.72% of its 13F portfolio. Elliott Management is also relatively very bullish on the stock, designating 6.69 percent of its 13F equity portfolio to T.

Due to the fact that AT&T Inc. (NYSE:T) has faced falling interest from the smart money, it’s safe to say that there is a sect of hedgies that slashed their positions entirely last quarter. Intriguingly, John Overdeck and David Siegel’s Two Sigma Advisors dumped the largest investment of all the hedgies followed by Insider Monkey, valued at close to $88.4 million in call options, and Mike Masters’s Masters Capital Management was right behind this move, as the fund said goodbye to about $71 million worth. These moves are important to note, as total hedge fund interest fell by 1 funds last quarter.

As you can see these stocks had an average of 83 hedge funds with bullish positions and the average amount invested in these stocks was $5224 million. That figure was $1407 million in T’s case. The Walt Disney Company (NYSE:DIS) is the most popular stock in this table. On the other hand Intel Corporation (NASDAQ:INTC) is the least popular one with only 58 bullish hedge fund positions. Compared to these stocks AT&T Inc. (NYSE:T) is even less popular than INTC. Hedge funds clearly dropped the ball on T as the stock delivered strong returns, though hedge funds’ consensus picks still generated respectable returns. Our calculations showed that top 20 most popular stocks among hedge funds returned 41.3% in 2019 and outperformed the S&P 500 ETF (SPY) by 10.1 percentage points. These stocks lost 12.9% in 2020 through March 9th but managed to beat the market by 1.9 percentage points. A small number of hedge funds were also right about betting on T as the stock returned -10% during the same time period and outperformed the market by an even larger margin.