Hedge Funds Were Betting On Autohome Inc (ATHM) Before The Coronavirus

In these volatile markets we scrutinize hedge fund filings to get a reading on which direction each stock might be going. Hedge Funds and other institutional investors have just completed filing their 13Fs with the Securities and Exchange Commission, revealing their equity portfolios as of the end of June. At Insider Monkey, we follow nearly 835 active hedge funds and notable investors and by analyzing their 13F filings, we can determine the stocks that they are collectively bullish on. One of their picks is Autohome Inc (NYSE:ATHM), so let’s take a closer look at the sentiment that surrounds it in the current quarter.

Is Autohome Inc (NYSE:ATHM) a bargain? The smart money is in an optimistic mood. The number of bullish hedge fund bets increased by 1 lately. Our calculations also showed that ATHM isn’t among the 30 most popular stocks among hedge funds (click for Q4 rankings and see the video at the end of this article for Q3 rankings). ATHM was in 13 hedge funds’ portfolios at the end of December. There were 12 hedge funds in our database with ATHM holdings at the end of the previous quarter.

In the 21st century investor’s toolkit there are dozens of tools stock market investors put to use to assess their stock investments. A couple of the most under-the-radar tools are hedge fund and insider trading indicators. Our experts have shown that, historically, those who follow the top picks of the elite investment managers can beat the market by a solid margin (see the details here).

We leave no stone unturned when looking for the next great investment idea. For example we recently identified a stock that trades 25% below the net cash on its balance sheet. We read hedge fund investor letters and listen to stock pitches at hedge fund conferences, and go through short-term trade recommendations like this one. We even check out the recommendations of services with hard to believe track records. Our best call in 2020 was shorting the market when S&P 500 was trading at 3150 after realizing the coronavirus pandemic’s significance before most investors. With all of this in mind let’s review the fresh hedge fund action encompassing Autohome Inc (NYSE:ATHM).

What have hedge funds been doing with Autohome Inc (NYSE:ATHM)? 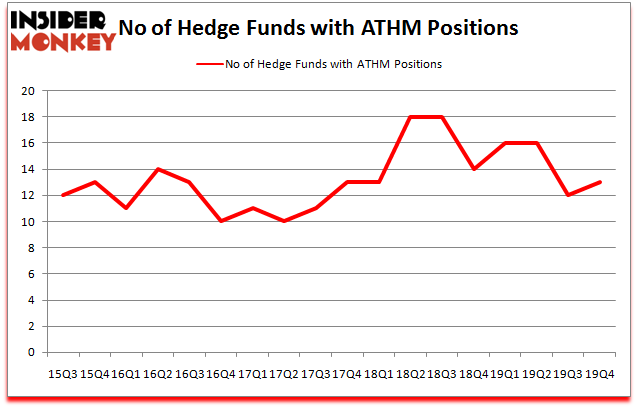 The largest stake in Autohome Inc (NYSE:ATHM) was held by Orbis Investment Management, which reported holding $718.4 million worth of stock at the end of September. It was followed by D E Shaw with a $48.9 million position. Other investors bullish on the company included Falcon Edge Capital, AQR Capital Management, and Millennium Management. In terms of the portfolio weights assigned to each position Orbis Investment Management allocated the biggest weight to Autohome Inc (NYSE:ATHM), around 5.02% of its 13F portfolio. Falcon Edge Capital is also relatively very bullish on the stock, designating 2.63 percent of its 13F equity portfolio to ATHM.

Now, some big names have been driving this bullishness. Falcon Edge Capital, managed by Richard Gerson and Navroz D. Udwadia, initiated the biggest position in Autohome Inc (NYSE:ATHM). Falcon Edge Capital had $13.6 million invested in the company at the end of the quarter. Ken Griffin’s Citadel Investment Group also initiated a $3 million position during the quarter. The other funds with new positions in the stock are Paul Marshall and Ian Wace’s Marshall Wace LLP, Noam Gottesman’s GLG Partners, and Mike Vranos’s Ellington.

As you can see these stocks had an average of 34.75 hedge funds with bullish positions and the average amount invested in these stocks was $841 million. That figure was $817 million in ATHM’s case. Coupa Software Incorporated (NASDAQ:COUP) is the most popular stock in this table. On the other hand UGI Corp (NYSE:UGI) is the least popular one with only 23 bullish hedge fund positions. Compared to these stocks Autohome Inc (NYSE:ATHM) is even less popular than UGI. Hedge funds clearly dropped the ball on ATHM as the stock delivered strong returns, though hedge funds’ consensus picks still generated respectable returns. Our calculations showed that top 20 most popular stocks among hedge funds returned 41.3% in 2019 and outperformed the S&P 500 ETF (SPY) by 10.1 percentage points. These stocks lost 22.3% in 2020 through March 16th but still beat the market by 3.2 percentage points. A small number of hedge funds were also right about betting on ATHM as the stock returned -16.2% during the same time period and outperformed the market by an even larger margin.