Out of thousands of stocks that are currently traded on the market, it is difficult to determine those that can really generate strong returns. Hedge funds and institutional investors spend millions of dollars on analysts with MBAs and PhDs, who are industry experts and well connected to other industry and media insiders on top of that. Individual investors can piggyback the hedge funds employing these talents and can benefit from their vast resources and knowledge in that way. We analyze quarterly 13F filings of over 700 hedge funds and, by looking at the smart money sentiment that surrounds a stock, we can determine whether it has potential to beat the market over the long-term. Our analysis showed that hedge funds were 600% overweight Imperva Inc (NYSE:IMPV) at the end of September.

Collectively hedge funds tracked by Insider Monkey owned nearly 30% of Imperva’s outstanding shares right before the company announced that Thoma Bravo agreed to acquire the company for $55.75 per share in cash in early October. The stock jumped to $55 from $46 at the end of September.

How have hedgies been trading Imperva Inc (NYSE:IMPV)?

Heading into the fourth quarter of 2018, a total of 29 of the hedge funds tracked by Insider Monkey were long this stock. The graph below displays the number of hedge funds with bullish position in IMPV over the last 13 quarters. With the smart money’s positions undergoing their usual ebb and flow, there exists a few notable hedge fund managers who were increasing their stakes considerably (or already accumulated large positions). 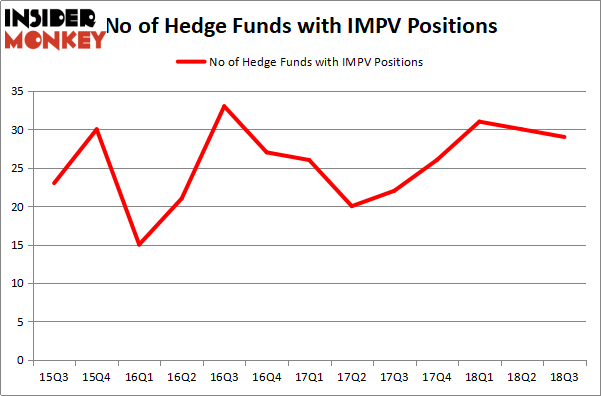 The largest stake in Imperva Inc (NYSE:IMPV) was held by Eminence Capital, which reported holding $146 million worth of stock at the end of September. It was followed by RGM Capital with a $92 million position. Other investors bullish on the company included Renaissance Technologies, Elliott Management, and Alyeska Investment Group.

Unfortunately some hedge funds sold out of the stock right before the jump. Richard Barrera’s Roystone Capital Partners said goodbye to the biggest stake of all the hedgies monitored by Insider Monkey, comprising close to $11.3 million in stock, and Kenneth Squire’s 13D Management was right behind this move, as the fund dropped about $10.6 million worth.

By the way, hedge funds were 440% overweight on Papa John’s Int’l, Inc. (NASDAQ:PZZA) due to expected bid by Trian Partners. Overall, though, hedge funds were more overweight IMPV and they were rewarded handsomely in a market environment where 40% of the S&P 500 constituents went into a bear market. Insider Monkey’s quarterly newsletter publishes the list of stocks hedge funds are extremely overweight at the end of September.