Hedge Funds Were 350% Overweight This Stock Right Before It Doubled

We at Insider Monkey have gone over 700 13F filings that hedge funds and prominent investors are required to file by the SEC. The 13F filings show the funds’ and investors’ portfolio positions as of September 30th. In this article we look at what those investors think of Electro Scientific Industries, Inc. (NASDAQ:ESIO).

Electro Scientific Industries, Inc. (NASDAQ:ESIO) is in the process of selling itself to MKS Instruments for $30 a share. ESIO shares were trading below the $15 market right before the announcements. Our calculations show that hedge funds tracked by Insider Monkey collectively owned 17.4% of ESIO’s outstanding shares. This means hedge funds were 350% overweight the stock right before it doubled. Investors usually pay attention to the largest cap stocks which make up the list of 30 most popular stocks among hedge funds. However, historically hedge funds generated much bigger returns in small-cap stocks.

According to most market participants, hedge funds are assumed to be worthless, outdated investment vehicles of the past. While there are over 8000 funds in operation today, Our experts choose to focus on the elite of this club, approximately 700 funds. These investment experts preside over the lion’s share of all hedge funds’ total capital, and by tailing their unrivaled stock picks, Insider Monkey has figured out various investment strategies that have historically outstripped the broader indices. Insider Monkey’s flagship hedge fund strategy outperformed the S&P 500 index by 6 percentage points annually since its inception in May 2014 through early November 2018. We were able to generate large returns even by identifying short candidates. Our portfolio of short stocks lost 24% since February 2017 (through December 3rd) even though the market was up nearly 23% during the same period. We just shared a list of 11 short targets in our latest quarterly update. 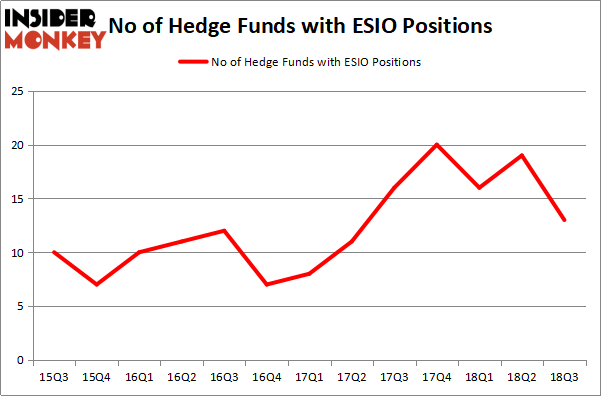 More specifically, Royce & Associates was the largest shareholder of Electro Scientific Industries, Inc. (NASDAQ:ESIO), with a stake worth $40.4 million reported as of the end of September. Trailing Royce & Associates was Renaissance Technologies, which amassed a stake valued at $37 million. AQR Capital Management, Millennium Management, and Gotham Asset Management were also very fond of the stock, giving the stock large weights in their portfolios.

Because Electro Scientific Industries, Inc. (NASDAQ:ESIO) has faced declining sentiment from the smart money, we can see that there lies a certain “tier” of hedge funds that slashed their entire stakes last quarter though most of these were tiny positions. Mike Vranos’s Ellington dropped the largest stake of the “upper crust” of funds watched by Insider Monkey, comprising an estimated $1 million in stock, and Paul Tudor Jones’s Tudor Investment Corp was right behind this move, as the fund dumped about $0.8 million worth.

As you can see these stocks had an average of 8.25 hedge funds with bullish positions and the average amount invested in these stocks was $81 million. That figure was $104 million in ESIO’s case. Greenhill & Co., Inc. (NYSE:GHL) is the most popular stock in this table. On the other hand Dova Pharmaceuticals, Inc. (NASDAQ:DOVA) is the least popular one with only 4 bullish hedge fund positions. Compared to these stocks Electro Scientific Industries, Inc. (NASDAQ:ESIO) is more popular among hedge funds.

Hedge funds were 350% overweight ESIO shares and they were rewarded handsomely in a market environment where 40% of the S&P 500 constituents went into a bear market.  Another of these stocks was Imperva where hedge funds were 600% overweight right before the merger announcement. Insider Monkey’s quarterly newsletter publishes the list of stocks hedge funds are extremely overweight at the end of September.