We are still in an overall bull market and many stocks that smart money investors were piling into surged through October 17th. Among them, Facebook and Microsoft ranked among the top 3 picks and these stocks gained 45% and 39% respectively. Hedge funds’ top 3 stock picks returned 34.4% this year and beat the S&P 500 ETFs by 13 percentage points. Investing in index funds guarantees you average returns, not superior returns. We are looking to generate superior returns for our readers. That’s why we believe it isn’t a waste of time to check out hedge fund sentiment before you invest in a stock like Grocery Outlet Holding Corp. (NASDAQ:GO).

Is Grocery Outlet Holding Corp. (NASDAQ:GO) undervalued? The smart money is optimistic. The number of bullish hedge fund positions was 21 lately. Our calculations also showed that GO isn’t among the 30 most popular stocks among hedge funds (see the video below). 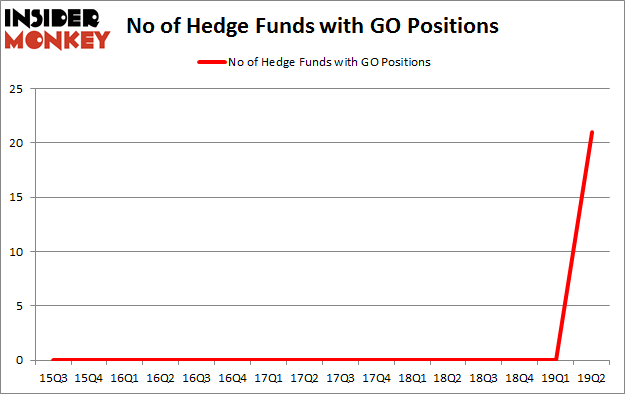 Of the funds tracked by Insider Monkey, Bob Peck and Andy Raab’s FPR Partners has the most valuable position in Grocery Outlet Holding Corp. (NASDAQ:GO), worth close to $32.9 million, amounting to 0.8% of its total 13F portfolio. Coming in second is Lee Hicks and Jan Koerner of Park Presidio Capital, with a $32.5 million position; the fund has 4.1% of its 13F portfolio invested in the stock. Some other hedge funds and institutional investors with similar optimism encompass Ken Griffin’s Citadel Investment Group, Israel Englander’s Millennium Management and Phill Gross and Robert Atchinson’s Adage Capital Management.

With a general bullishness amongst the heavyweights, key hedge funds have been driving this bullishness. FPR Partners, managed by Bob Peck and Andy Raab, created the most outsized position in Grocery Outlet Holding Corp. (NASDAQ:GO). FPR Partners had $32.9 million invested in the company at the end of the quarter. Lee Hicks and Jan Koerner’s Park Presidio Capital also made a $32.5 million investment in the stock during the quarter. The other funds with new positions in the stock are Ken Griffin’s Citadel Investment Group, Israel Englander’s Millennium Management, and Phill Gross and Robert Atchinson’s Adage Capital Management.

Let’s now take a look at hedge fund activity in other stocks – not necessarily in the same industry as Grocery Outlet Holding Corp. (NASDAQ:GO) but similarly valued. These stocks are The Goodyear Tire & Rubber Company (NASDAQ:GT), The Chemours Company (NYSE:CC), Cornerstone OnDemand, Inc. (NASDAQ:CSOD), and Olin Corporation (NYSE:OLN). This group of stocks’ market valuations are closest to GO’s market valuation.

As you can see these stocks had an average of 27 hedge funds with bullish positions and the average amount invested in these stocks was $512 million. That figure was $153 million in GO’s case. The Goodyear Tire & Rubber Company (NASDAQ:GT) is the most popular stock in this table. On the other hand Olin Corporation (NYSE:OLN) is the least popular one with only 23 bullish hedge fund positions. Compared to these stocks Grocery Outlet Holding Corp. (NASDAQ:GO) is even less popular than OLN. Our calculations showed that top 20 most popular stocks among hedge funds returned 24.4% in 2019 through September 30th and outperformed the S&P 500 ETF (SPY) by 4 percentage points. A small number of hedge funds were also right about betting on GO, though not to the same extent, as the stock returned 5.5% during the third quarter and outperformed the market as well.

Is Teradata Corporation (TDC) Going To Burn These Hedge Funds ?
Monthly Newsletter Strategy
Download a free copy of our newsletter and see the details inside!
Hedge Fund Resource Center
Related News
11 Largest Auto Insurance Companies In The US In 2019 10 Poorest Cities in America in 2019 8 Lowest Tar and Nicotine Cigarette Brands in 2019
Billionaire Hedge Funds