Russell 2000 ETF (IWM) lagged the larger S&P 500 ETF (SPY) by more than 10 percentage points since the end of the third quarter of 2018 as investors first worried over the possible ramifications of rising interest rates and the escalation of the trade war with China. The hedge funds and institutional investors we track typically invest more in smaller-cap stocks than an average investor (i.e. only about 60% S&P 500 constituents were among the 500 most popular stocks among hedge funds), and we have seen data that shows those funds paring back their overall exposure. Those funds cutting positions in small-caps is one reason why volatility has increased. In the following paragraphs, we take a closer look at what hedge funds and prominent investors think of Capstead Mortgage Corporation (NYSE:CMO) and see how the stock is affected by the recent hedge fund activity.

Capstead Mortgage Corporation (NYSE:CMO) shares haven’t seen a lot of action during the third quarter. Overall, hedge fund sentiment was unchanged. The stock was in 9 hedge funds’ portfolios at the end of the third quarter of 2019. The level and the change in hedge fund popularity aren’t the only variables you need to analyze to decipher hedge funds’ perspectives. A stock may witness a boost in popularity but it may still be less popular than similarly priced stocks. That’s why at the end of this article we will examine companies such as Bluegreen Vacations Corporation (NYSE:BXG), Quotient Technology Inc (NYSE:QUOT), and Puxin Limited (NYSE:NEW) to gather more data points. Our calculations also showed that CMO isn’t among the 30 most popular stocks among hedge funds (click for Q3 rankings and see the video below for Q2 rankings).

We leave no stone unturned when looking for the next great investment idea. For example Discover is offering this insane cashback card, so we look into shorting the stock. One of the most bullish analysts in America just put his money where his mouth is. He says, “I’m investing more today than I did back in early 2009.” So we check out his pitch. We read hedge fund investor letters and listen to stock pitches at hedge fund conferences. We even check out this option genius’ weekly trade ideas. This December we recommended Adams Energy  based on an under-the-radar fund manager’s investor letter and the stock gained 20 percent. Let’s take a look at the new hedge fund action regarding Capstead Mortgage Corporation (NYSE:CMO).

What does smart money think about Capstead Mortgage Corporation (NYSE:CMO)?

At Q3’s end, a total of 9 of the hedge funds tracked by Insider Monkey were long this stock, a change of 0% from one quarter earlier. By comparison, 7 hedge funds held shares or bullish call options in CMO a year ago. With the smart money’s sentiment swirling, there exists a few notable hedge fund managers who were upping their stakes substantially (or already accumulated large positions). 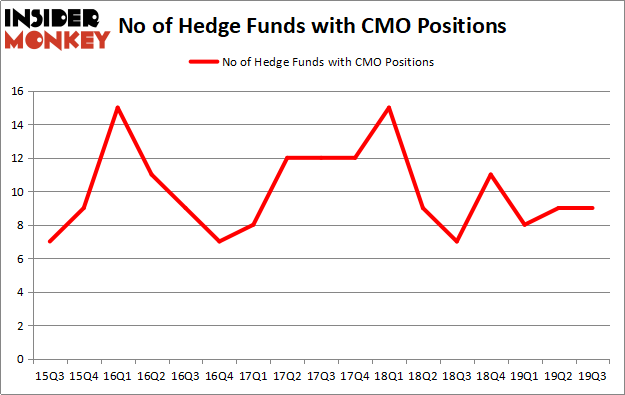 More specifically, Renaissance Technologies was the largest shareholder of Capstead Mortgage Corporation (NYSE:CMO), with a stake worth $15.4 million reported as of the end of September. Trailing Renaissance Technologies was Azora Capital, which amassed a stake valued at $7.2 million. Winton Capital Management, Citadel Investment Group, and Tudor Investment Corp were also very fond of the stock, becoming one of the largest hedge fund holders of the company. In terms of the portfolio weights assigned to each position Azora Capital allocated the biggest weight to Capstead Mortgage Corporation (NYSE:CMO), around 1.59% of its 13F portfolio. Caxton Associates is also relatively very bullish on the stock, earmarking 0.08 percent of its 13F equity portfolio to CMO.

Since Capstead Mortgage Corporation (NYSE:CMO) has witnessed bearish sentiment from the entirety of the hedge funds we track, it’s easy to see that there was a specific group of fund managers who were dropping their entire stakes in the third quarter. Intriguingly, Mike Vranos’s Ellington sold off the largest position of the “upper crust” of funds watched by Insider Monkey, comprising an estimated $1.8 million in stock. Peter Rathjens, Bruce Clarke and John Campbell’s fund, Arrowstreet Capital, also sold off its stock, about $1.3 million worth. These moves are intriguing to say the least, as total hedge fund interest stayed the same (this is a bearish signal in our experience).

As you can see these stocks had an average of 11.25 hedge funds with bullish positions and the average amount invested in these stocks was $74 million. That figure was $33 million in CMO’s case. Quotient Technology Inc (NYSE:QUOT) is the most popular stock in this table. On the other hand Puxin Limited (NYSE:NEW) is the least popular one with only 5 bullish hedge fund positions. Capstead Mortgage Corporation (NYSE:CMO) is not the least popular stock in this group but hedge fund interest is still below average. This is a slightly negative signal and we’d rather spend our time researching stocks that hedge funds are piling on. Our calculations showed that top 20 most popular stocks among hedge funds returned 37.4% in 2019 through the end of November and outperformed the S&P 500 ETF (SPY) by 9.9 percentage points. Unfortunately CMO wasn’t nearly as popular as these 20 stocks (hedge fund sentiment was quite bearish); CMO investors were disappointed as the stock returned 5.9% during the first two months of the fourth quarter and underperformed the market. If you are interested in investing in large cap stocks with huge upside potential, you should check out the top 20 most popular stocks among hedge funds as 70 percent of these stocks already outperformed the market in Q4.