Does Caesarstone Ltd (NASDAQ:CSTE) represent a good buying opportunity at the moment? Let’s quickly check the hedge fund interest towards the company. Hedge fund firms constantly search out bright intellectuals and highly-experienced employees and throw away millions of dollars on satellite photos and other research activities, so it is no wonder why they tend to generate millions in profits each year. It is also true that some hedge fund players fail inconceivably on some occasions, but net net their stock picks have been generating superior risk-adjusted returns on average over the years.

Hedge fund interest in Caesarstone Ltd (NASDAQ:CSTE) shares was flat at the end of last quarter. This is usually a negative indicator. At the end of this article we will also compare CSTE to other stocks including City Office REIT Inc (NYSE:CIO), Flushing Financial Corporation (NASDAQ:FFIC), and Dorian LPG Ltd (NYSE:LPG) to get a better sense of its popularity.

We leave no stone unturned when looking for the next great investment idea. For example Discover is offering this insane cashback card, so we look into shorting the stock. One of the most bullish analysts in America just put his money where his mouth is. He says, “I’m investing more today than I did back in early 2009.” So we check out his pitch. We read hedge fund investor letters and listen to stock pitches at hedge fund conferences. We even check out this option genius’ weekly trade ideas. This December we recommended Adams Energy  based on an under-the-radar fund manager’s investor letter and the stock gained 20 percent. We’re going to review the latest hedge fund action regarding Caesarstone Ltd (NASDAQ:CSTE).

Heading into the fourth quarter of 2019, a total of 9 of the hedge funds tracked by Insider Monkey were long this stock, a change of 0% from one quarter earlier. Below, you can check out the change in hedge fund sentiment towards CSTE over the last 17 quarters. So, let’s review which hedge funds were among the top holders of the stock and which hedge funds were making big moves. 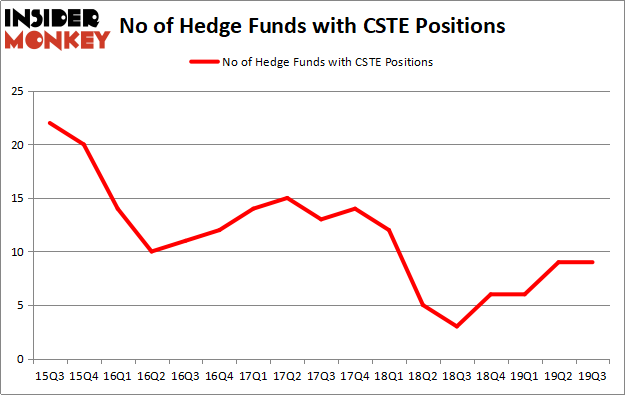 More specifically, Hawk Ridge Management was the largest shareholder of Caesarstone Ltd (NASDAQ:CSTE), with a stake worth $11.2 million reported as of the end of September. Trailing Hawk Ridge Management was Arrowstreet Capital, which amassed a stake valued at $5 million. Renaissance Technologies, D E Shaw, and Millennium Management were also very fond of the stock, becoming one of the largest hedge fund holders of the company. In terms of the portfolio weights assigned to each position Hawk Ridge Management allocated the biggest weight to Caesarstone Ltd (NASDAQ:CSTE), around 2.25% of its 13F portfolio. Weld Capital Management is also relatively very bullish on the stock, earmarking 0.04 percent of its 13F equity portfolio to CSTE.

Because Caesarstone Ltd (NASDAQ:CSTE) has witnessed a decline in interest from the entirety of the hedge funds we track, it’s easy to see that there is a sect of hedgies that decided to sell off their full holdings by the end of the third quarter. It’s worth mentioning that Donald Sussman’s Paloma Partners said goodbye to the largest position of the 750 funds watched by Insider Monkey, worth an estimated $0.2 million in stock. Matthew Hulsizer’s fund, PEAK6 Capital Management, also dropped its stock, about $0.2 million worth. These moves are important to note, as total hedge fund interest stayed the same (this is a bearish signal in our experience).

As you can see these stocks had an average of 11.75 hedge funds with bullish positions and the average amount invested in these stocks was $74 million. That figure was $28 million in CSTE’s case. Dorian LPG Ltd (NYSE:LPG) is the most popular stock in this table. On the other hand Borr Drilling Limited (NYSE:BORR) is the least popular one with only 5 bullish hedge fund positions. Caesarstone Ltd (NASDAQ:CSTE) is not the least popular stock in this group but hedge fund interest is still below average. This is a slightly negative signal and we’d rather spend our time researching stocks that hedge funds are piling on. Our calculations showed that top 20 most popular stocks among hedge funds returned 37.4% in 2019 through the end of November and outperformed the S&P 500 ETF (SPY) by 9.9 percentage points. Unfortunately CSTE wasn’t nearly as popular as these 20 stocks (hedge fund sentiment was quite bearish); CSTE investors were disappointed as the stock returned -4.8% during the first two months of the fourth quarter and underperformed the market. If you are interested in investing in large cap stocks with huge upside potential, you should check out the top 20 most popular stocks among hedge funds as 70 percent of these stocks already outperformed the market in Q4.

Is Cushman & Wakefield plc (CWK) A Good Stock To Buy?
Monthly Newsletter Strategy
Download a free copy of our newsletter and see the details inside!
Hedge Fund Resource Center
Related News
Here’s What Hedge Funds Think About Caesarstone Ltd. (CSTE) Here’s What Hedge Fund Think About Caesarstone Ltd. (CSTE) Is Caesarstone Ltd (CSTE) Poised for a Rebound? Polaris, Syntel: Why These 5 Stocks Are Making Big Moves Today Here’s Why These 5 Stocks Are on the Move Today Should You Buy Caesarstone Sdot-Yam Ltd (CSTE)? Hedge Fund Data Suggest You Should Go Long One of These Two Monday Losers 10 Countries with the Highest Coffee Consumption in the World 10 Stocks That Went Up During The 2008 Crash 10 Movies About Amnesia on Netflix
Billionaire Hedge Funds