In these volatile markets we scrutinize hedge fund filings to get a reading on which direction each stock might be going even though the mainstream financial media journalists don’t agree with this approach. Keeping this in mind, let’s take a look at whether Johnson & Johnson (NYSE:JNJ) is a good investment right now. We at Insider Monkey like to examine what billionaires and hedge funds think of a company before spending days of research on it. Given their 2 and 20 payment structure, hedge funds have more incentives and resources than the average investor. The funds have access to expert networks and get tips from industry insiders. They also employ numerous Ivy League graduates and MBAs. Like everyone else, hedge funds perform miserably at times, but their consensus picks have historically outperformed the market after risk adjustments.

Johnson & Johnson (NYSE:JNJ) investors should be aware of an increase in support from the world’s most elite money managers lately. JNJ was in 85 hedge funds’ portfolios at the end of December. There were 84 hedge funds in our database with JNJ holdings at the end of the previous quarter. Our calculations also showed that JNJ ranked 27th among the 30 most popular stocks among hedge funds (click for Q4 rankings and see the video at the end of this article for Q3 rankings).

We leave no stone unturned when looking for the next great investment idea. For example, this trader is claiming triple digit returns, so we check out his latest trade recommendations We are probably at the peak of the COVID-19 pandemic, so we check out this biotech investor’s coronavirus picks. We read hedge fund investor letters and listen to stock pitches at hedge fund conferences (by the way watch this video if you want to hear one of the best healthcare hedge fund manager’s coronavirus analysis). Our best call in 2020 was shorting the market when S&P 500 was trading at 3150 after realizing the coronavirus pandemic’s significance before most investors. With all of this in mind let’s go over the recent hedge fund action encompassing Johnson & Johnson (NYSE:JNJ).

At the end of the fourth quarter, a total of 85 of the hedge funds tracked by Insider Monkey were bullish on this stock, a change of 1% from the previous quarter. Below, you can check out the change in hedge fund sentiment towards JNJ over the last 18 quarters. With the smart money’s capital changing hands, there exists a few notable hedge fund managers who were boosting their holdings considerably (or already accumulated large positions). 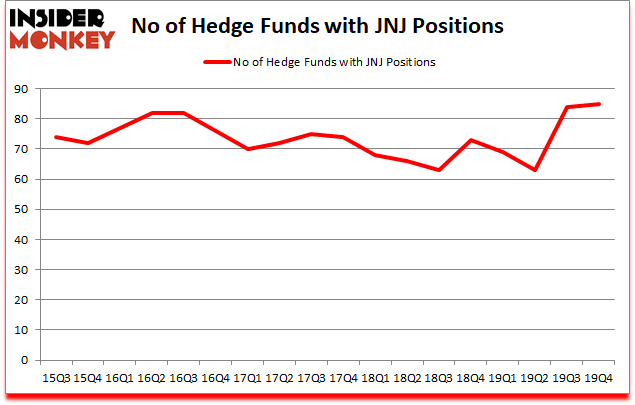 Of the funds tracked by Insider Monkey, Ken Fisher’s Fisher Asset Management has the most valuable position in Johnson & Johnson (NYSE:JNJ), worth close to $1.7646 billion, accounting for 1.8% of its total 13F portfolio. On Fisher Asset Management’s heels is AQR Capital Management, led by Cliff Asness, holding a $1.0204 billion position; the fund has 1.2% of its 13F portfolio invested in the stock. Other professional money managers with similar optimism include D. E. Shaw’s D E Shaw, John Overdeck and David Siegel’s Two Sigma Advisors and Donald Yacktman’s Yacktman Asset Management. In terms of the portfolio weights assigned to each position Yacktman Asset Management allocated the biggest weight to Johnson & Johnson (NYSE:JNJ), around 6.86% of its 13F portfolio. Fir Tree is also relatively very bullish on the stock, setting aside 6.59 percent of its 13F equity portfolio to JNJ.

With a general bullishness amongst the heavyweights, key hedge funds have jumped into Johnson & Johnson (NYSE:JNJ) headfirst. Suvretta Capital Management, managed by Aaron Cowen, created the biggest position in Johnson & Johnson (NYSE:JNJ). Suvretta Capital Management had $177.3 million invested in the company at the end of the quarter. Frank Brosens’s Taconic Capital also initiated a $72.9 million position during the quarter. The other funds with new positions in the stock are Jeffrey Tannenbaum’s Fir Tree, Steve Cohen’s Point72 Asset Management, and Justin John Ferayorni’s Tamarack Capital Management.

Let’s go over hedge fund activity in other stocks – not necessarily in the same industry as Johnson & Johnson (NYSE:JNJ) but similarly valued. We will take a look at Walmart Inc. (NYSE:WMT), Bank of America Corporation (NYSE:BAC), Berkshire Hathaway Inc. (NYSE:BRK-B), and The Procter & Gamble Company (NYSE:PG). All of these stocks’ market caps resemble JNJ’s market cap.

As you can see these stocks had an average of 85.75 hedge funds with bullish positions and the average amount invested in these stocks was $19502 million. That figure was $8258 million in JNJ’s case. Berkshire Hathaway Inc. (NYSE:BRK-B) is the most popular stock in this table. On the other hand Walmart Inc. (NYSE:WMT) is the least popular one with only 52 bullish hedge fund positions. Johnson & Johnson (NYSE:JNJ) is not the least popular stock in this group but hedge fund interest is still below average. Our calculations showed that top 10 most popular stocks among hedge funds returned 41.4% in 2019 and outperformed the S&P 500 ETF (SPY) by 10.1 percentage points. These stocks lost 1.0% in 2020 through April 20th but still beat the market by 11 percentage points. A small number of hedge funds were also right about betting on JNJ as the stock returned 4.6% during the same time period and outperformed the market by an even larger margin.