Concerns over rising interest rates and expected further rate increases have hit several stocks hard since the end of the third quarter. The NASDAQ and Russell 2000 indices are already in correction territory. More importantly, the Russell 2000 ETF (IWM) underperformed the larger S&P 500 ETF (SPY) by about 4 percentage points in October. Hedge funds and institutional investors tracked by Insider Monkey usually invest a disproportionate amount of their portfolios in smaller cap stocks. We have been receiving indications that hedge funds were paring back their overall exposure and this is one of the factors behind the recent movements in major indices. In this article, we will take a closer look at hedge fund sentiment towards Mylan Inc. (NASDAQ:MYL).

The 600+ hedge funds tracked by Insider Monkey’s database were overweight Mylan on June 30, owning 16.2% of its shares, though there was a small dip in the number of shareholders during Q2. Hedge funds managed or founded by billionaires are especially bullish on Mylan and several other healthcare stocks, with them ranking among the 25 Stocks Billionaires Are Piling On. John Paulson’s Paulson & Co. (11.54 million shares) and David Einhorn’s Greenlight Capital (6.86 million shares) were among the top shareholders. Mylan shares are barely half of what they were at the start of May 2015, but have gained 17% since October 29, as investors are starting to warm up to the company’s overseas operations in light of the growing pressure on generics in the U.S.

In the financial world there are many methods investors can use to evaluate stocks. Some of the less known methods are hedge fund and insider trading moves. Our researchers have shown that, historically, those who follow the best picks of the top fund managers can trounce their index-focused peers by a solid margin (see the details here).

How have hedgies been trading Mylan Inc. (NASDAQ:MYL)?

Heading into the fourth quarter of 2018, a total of 40 of the hedge funds tracked by Insider Monkey were bullish on this stock, a drop of 9% from the previous quarter. The graph below displays the number of hedge funds with bullish positions in MYL over the last 6 quarters. With hedge funds’ sentiment swirling, there exists a few notable hedge fund managers who were increasing their holdings considerably (or already accumulated large positions). 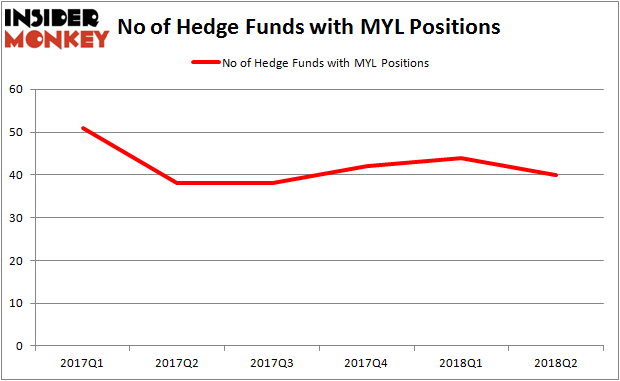 Among these funds, Pzena Investment Management held the most valuable stake in Mylan Inc. (NASDAQ:MYL), which was worth $763.1 million at the end of the second quarter. On the second spot was Paulson & Co which had amassed $417.2 million worth of shares. Moreover, Triarii Capital and Greenlight Capital were also bullish on Mylan Inc. (NASDAQ:MYL), allocating a large percentage of their 13F portfolios to this stock.

Seeing as Mylan Inc. (NASDAQ:MYL) has experienced falling interest from the smart money, it’s safe to say that there lies a certain “tier” of hedge funds that slashed their full holdings heading into Q3. Intriguingly, Zach Schreiber’s Point State Capital dropped the biggest position of the “upper crust” of funds watched by Insider Monkey, comprising close to $113.4 million in call options. Christopher James’ fund, Partner Fund Management, also cut its call options, about $56.7 million worth. These moves are important to note, as aggregate hedge fund interest was cut by 4 funds heading into Q3.

As you can see these stocks had an average of 13 hedge funds with bullish positions and the average amount invested in these stocks was $301 million. That figure was $3.01 billion in MYL’s case, a full 10x higher. Energy Transfer Equity, L.P. (NYSE:ETE) is the most popular stock in this table. On the other hand KB is the least popular one with only 7 bullish hedge fund positions. Compared to these stocks Mylan Inc. (NASDAQ:MYL) is far more popular among hedge funds. Considering that hedge funds and the billionaires among them are fond of this stock in relation to its market cap peers, it may be a good idea to analyze it in detail and potentially include it in your portfolio.