Like everyone else, elite investors make mistakes. Some of their top consensus picks, such as Amazon, Facebook and Alibaba, have not done well in Q4 due to various reasons. Nevertheless, the data show elite investors’ consensus picks have done well on average over the long-term. The top 20 stocks among hedge funds beat the S&P 500 Index ETF by 4 percentage points so far this year. Because their consensus picks have done well, we pay attention to what elite funds think before doing extensive research on a stock. In this article, we take a closer look at Carter’s, Inc. (NYSE:CRI) from the perspective of those elite funds.

Carter’s, Inc. (NYSE:CRI) was in 25 hedge funds’ portfolios at the end of the second quarter of 2019. CRI has experienced an increase in enthusiasm from smart money recently. There were 19 hedge funds in our database with CRI positions at the end of the previous quarter. Our calculations also showed that CRI isn’t among the 30 most popular stocks among hedge funds (view the video below). 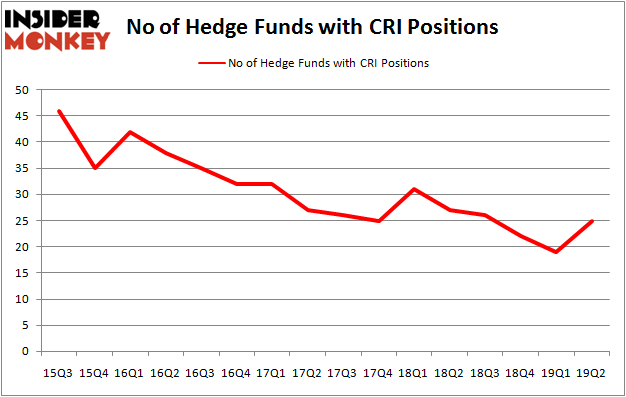 When looking at the institutional investors followed by Insider Monkey, Valinor Management LLC, managed by David Gallo, holds the biggest position in Carter’s, Inc. (NYSE:CRI). Valinor Management LLC has a $53.6 million position in the stock, comprising 3.2% of its 13F portfolio. The second largest stake is held by Ric Dillon of Diamond Hill Capital, with a $44.8 million position; the fund has 0.2% of its 13F portfolio invested in the stock. Remaining members of the smart money that hold long positions contain Bernard Horn’s Polaris Capital Management, Cliff Asness’s AQR Capital Management and Dmitry Balyasny’s Balyasny Asset Management.

As one would reasonably expect, key money managers have jumped into Carter’s, Inc. (NYSE:CRI) headfirst. Chilton Investment Company, managed by Richard Chilton, established the biggest position in Carter’s, Inc. (NYSE:CRI). Chilton Investment Company had $2.5 million invested in the company at the end of the quarter. John Tompkins’s Tyvor Capital also made a $2.2 million investment in the stock during the quarter. The other funds with brand new CRI positions are Philippe Laffont’s Coatue Management, Brandon Haley’s Holocene Advisors, and Minhua Zhang’s Weld Capital Management.