Like everyone else, elite investors make mistakes. Some of their top consensus picks, such as Amazon, Facebook and Alibaba, have not done well in Q4 of 2018 due to various reasons. Nevertheless, the data show elite investors’ consensus picks have done well on average over the long-term. The top 20 stocks among hedge funds beat the S&P 500 Index ETFs by nearly 10 percentage points during the first 11 months of 2019. Because their consensus picks have done well, we pay attention to what elite funds think before doing extensive research on a stock. In this article, we take a closer look at International Paper Company (NYSE:IP) from the perspective of those elite funds.

Is International Paper Company (NYSE:IP) a bargain? Investors who are in the know are in a pessimistic mood. The number of bullish hedge fund positions decreased by 4 in recent months. Our calculations also showed that IP isn’t among the 30 most popular stocks among hedge funds (click for Q3 rankings and see the video below for Q2 rankings). IP was in 27 hedge funds’ portfolios at the end of September. There were 31 hedge funds in our database with IP positions at the end of the previous quarter.

Unlike the largest US hedge funds that are convinced Dow will soar past 40,000 or the world’s most bearish hedge fund that’s more convinced than ever that a crash is coming, our long-short investment strategy doesn’t rely on bull or bear markets to deliver double digit returns. We only rely on the best performing hedge funds‘ buy/sell signals. We’re going to take a look at the fresh hedge fund action regarding International Paper Company (NYSE:IP).

Heading into the fourth quarter of 2019, a total of 27 of the hedge funds tracked by Insider Monkey were long this stock, a change of -13% from the previous quarter. On the other hand, there were a total of 28 hedge funds with a bullish position in IP a year ago. With the smart money’s capital changing hands, there exists an “upper tier” of key hedge fund managers who were boosting their stakes meaningfully (or already accumulated large positions). 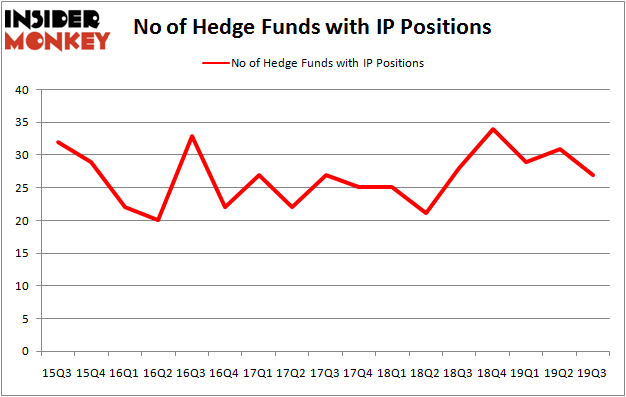 The largest stake in International Paper Company (NYSE:IP) was held by AQR Capital Management, which reported holding $136.4 million worth of stock at the end of September. It was followed by 12th Street Asset Management with a $21.6 million position. Other investors bullish on the company included Renaissance Technologies, Adage Capital Management, and Bridgewater Associates. In terms of the portfolio weights assigned to each position 12th Street Asset Management allocated the biggest weight to International Paper Company (NYSE:IP), around 5.72% of its portfolio. Game Creek Capital is also relatively very bullish on the stock, dishing out 0.85 percent of its 13F equity portfolio to IP.

Judging by the fact that International Paper Company (NYSE:IP) has faced falling interest from the aggregate hedge fund industry, it’s easy to see that there is a sect of fund managers who sold off their full holdings heading into Q4. Interestingly, Donald Sussman’s Paloma Partners dumped the biggest stake of all the hedgies monitored by Insider Monkey, worth close to $3.2 million in stock, and Israel Englander’s Millennium Management was right behind this move, as the fund dumped about $3 million worth. These bearish behaviors are interesting, as total hedge fund interest fell by 4 funds heading into Q4.

As you can see these stocks had an average of 27 hedge funds with bullish positions and the average amount invested in these stocks was $945 million. That figure was $273 million in IP’s case. Laboratory Corp. of America Holdings (NYSE:LH) is the most popular stock in this table. On the other hand First Republic Bank (NYSE:FRC) is the least popular one with only 19 bullish hedge fund positions. International Paper Company (NYSE:IP) is not the least popular stock in this group but hedge fund interest is still below average. Our calculations showed that top 20 most popular stocks among hedge funds returned 37.4% in 2019 through the end of November and outperformed the S&P 500 ETF (SPY) by 9.9 percentage points. A small number of hedge funds were also right about betting on IP as the stock returned 12.1% during the first two months of Q4 and outperformed the market by an even larger margin.