How do we determine whether TPG RE Finance Trust, Inc. (NYSE:TRTX) makes for a good investment at the moment? We analyze the sentiment of a select group of the very best investors in the world, who spend immense amounts of time and resources studying companies. They may not always be right (no one is), but data shows that their consensus long positions have historically outperformed the market when we adjust for known risk factors.

TPG RE Finance Trust, Inc. (NYSE:TRTX) has seen a decrease in enthusiasm from smart money recently. TRTX was in 9 hedge funds’ portfolios at the end of June. There were 11 hedge funds in our database with TRTX holdings at the end of the previous quarter. Our calculations also showed that TRTX isn’t among the 30 most popular stocks among hedge funds (see the video below).

In the 21st century investor’s toolkit there are a large number of methods investors put to use to assess stocks. Two of the best methods are hedge fund and insider trading sentiment. Our experts have shown that, historically, those who follow the best picks of the elite money managers can outpace their index-focused peers by a very impressive amount (see the details here). 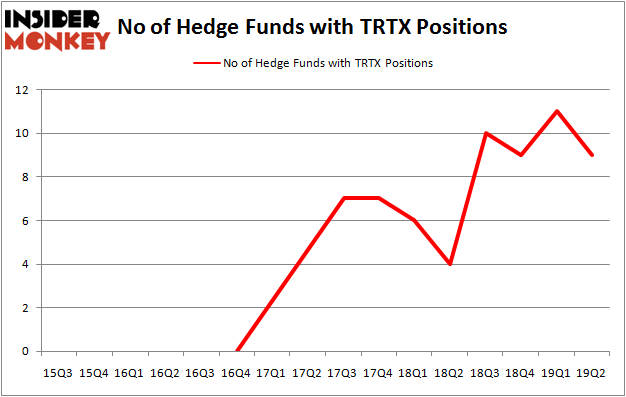 What have hedge funds been doing with TPG RE Finance Trust, Inc. (NYSE:TRTX)?

Heading into the third quarter of 2019, a total of 9 of the hedge funds tracked by Insider Monkey were bullish on this stock, a change of -18% from the first quarter of 2019. Below, you can check out the change in hedge fund sentiment towards TRTX over the last 16 quarters. With the smart money’s positions undergoing their usual ebb and flow, there exists a select group of notable hedge fund managers who were boosting their stakes meaningfully (or already accumulated large positions).

Among these funds, Renaissance Technologies held the most valuable stake in TPG RE Finance Trust, Inc. (NYSE:TRTX), which was worth $14 million at the end of the second quarter. On the second spot was Millennium Management which amassed $8 million worth of shares. Moreover, D E Shaw, Balyasny Asset Management, and Marshall Wace LLP were also bullish on TPG RE Finance Trust, Inc. (NYSE:TRTX), allocating a large percentage of their portfolios to this stock.

Since TPG RE Finance Trust, Inc. (NYSE:TRTX) has experienced a decline in interest from hedge fund managers, it’s easy to see that there lies a certain “tier” of money managers who sold off their positions entirely in the second quarter. Interestingly, Gavin Saitowitz and Cisco J. del Valle’s Springbok Capital said goodbye to the largest investment of all the hedgies monitored by Insider Monkey, worth an estimated $1.2 million in stock. Ken Griffin’s fund, Citadel Investment Group, also cut its stock, about $1.1 million worth. These moves are important to note, as total hedge fund interest was cut by 2 funds in the second quarter.

As you can see these stocks had an average of 16.25 hedge funds with bullish positions and the average amount invested in these stocks was $181 million. That figure was $49 million in TRTX’s case. Dave & Buster’s Entertainment, Inc. (NASDAQ:PLAY) is the most popular stock in this table. On the other hand HudBay Minerals Inc (NYSE:HBM) is the least popular one with only 12 bullish hedge fund positions. Compared to these stocks TPG RE Finance Trust, Inc. (NYSE:TRTX) is even less popular than HBM. Our calculations showed that top 20 most popular stocks among hedge funds returned 24.4% in 2019 through September 30th and outperformed the S&P 500 ETF (SPY) by 4 percentage points. A small number of hedge funds were also right about betting on TRTX, though not to the same extent, as the stock returned 5.1% during the third quarter and outperformed the market as well.