Does Public Storage (NYSE:PSA) represent a good buying opportunity at the moment? Let’s quickly check the hedge fund interest towards the company. Hedge fund firms constantly search out bright intellectuals and highly-experienced employees and throw away millions of dollars on satellite photos and other research activities, so it is no wonder why they tend to generate millions in profits each year. It is also true that some hedge fund players fail inconceivably on some occasions, but net net their stock picks have been generating superior risk-adjusted returns on average over the years.

Public Storage (NYSE:PSA) investors should be aware of a decrease in hedge fund sentiment lately. Our calculations also showed that PSA isn’t among the 30 most popular stocks among hedge funds (see the video below).

Unlike some fund managers who are betting on Dow reaching 40000 in a year, our long-short investment strategy doesn’t rely on bull markets to deliver double digit returns. We only rely on hedge fund buy/sell signals. Let’s go over the recent hedge fund action surrounding Public Storage (NYSE:PSA).

What does smart money think about Public Storage (NYSE:PSA)?

Heading into the third quarter of 2019, a total of 20 of the hedge funds tracked by Insider Monkey held long positions in this stock, a change of -20% from the previous quarter. By comparison, 17 hedge funds held shares or bullish call options in PSA a year ago. With the smart money’s sentiment swirling, there exists a select group of notable hedge fund managers who were increasing their stakes substantially (or already accumulated large positions). 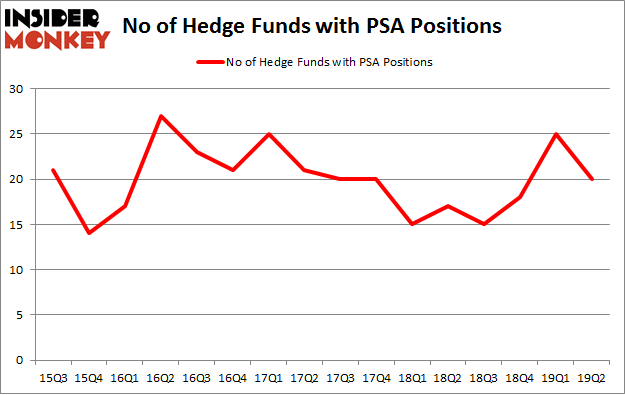 Of the funds tracked by Insider Monkey, Jim Simons’s Renaissance Technologies has the number one position in Public Storage (NYSE:PSA), worth close to $349.7 million, amounting to 0.3% of its total 13F portfolio. Sitting at the No. 2 spot is Alkeon Capital Management, led by Panayotis Takis Sparaggis, holding a $178.6 million call position; 0.7% of its 13F portfolio is allocated to the company. Remaining professional money managers with similar optimism include Cliff Asness’s AQR Capital Management, Jeffrey Furber’s AEW Capital Management and Peter Rathjens, Bruce Clarke and John Campbell’s Arrowstreet Capital.

Due to the fact that Public Storage (NYSE:PSA) has faced bearish sentiment from the entirety of the hedge funds we track, it’s safe to say that there is a sect of hedge funds who were dropping their positions entirely by the end of the second quarter. Intriguingly, Matthew Tewksbury’s Stevens Capital Management said goodbye to the largest stake of the “upper crust” of funds monitored by Insider Monkey, worth close to $6.4 million in stock, and Josh Donfeld and David Rogers’s Castle Hook Partners was right behind this move, as the fund cut about $3.4 million worth. These moves are interesting, as aggregate hedge fund interest was cut by 5 funds by the end of the second quarter.

As you can see these stocks had an average of 33 hedge funds with bullish positions and the average amount invested in these stocks was $1583 million. That figure was $824 million in PSA’s case. Analog Devices, Inc. (NASDAQ:ADI) is the most popular stock in this table. On the other hand Keurig Dr Pepper Inc. (NYSE:KDP) is the least popular one with only 21 bullish hedge fund positions. Compared to these stocks Public Storage (NYSE:PSA) is even less popular than KDP. Our calculations showed that top 20 most popular stocks among hedge funds returned 24.4% in 2019 through September 30th and outperformed the S&P 500 ETF (SPY) by 4 percentage points. A small number of hedge funds were also right about betting on PSA, though not to the same extent, as the stock returned 3.8% during the third quarter and outperformed the market as well.