Is Genesis Energy, L.P. (NYSE:GEL) a good bet right now? We like to analyze hedge fund sentiment before conducting days of in-depth research. We do so because hedge funds and other elite investors have numerous Ivy League graduates, expert network advisers, and supply chain tipsters working or consulting for them. There is not a shortage of news stories covering failed hedge fund investments and it is a fact that hedge funds’ picks don’t beat the market 100% of the time, but their consensus picks have historically done very well and have outperformed the market after adjusting for risk.

Is Genesis Energy, L.P. (NYSE:GEL) worth your attention right now? Money managers are becoming less hopeful. The number of bullish hedge fund positions decreased by 2 lately. Our calculations also showed that GEL isn’t among the 30 most popular stocks among hedge funds (see the video below). Later in the article we will compare GEL against Piedmont Office Realty Trust, Inc. (NYSE:PDM), Monro Inc (NASDAQ:MNRO), Retail Properties of America Inc (NYSE:RPAI), and Farfetch Limited (NYSE:FTCH) to determine which stock hedge funds really like in this group.

At the end of the third quarter, a total of 2 of the hedge funds tracked by Insider Monkey were bullish on this stock, a change of -50% from one quarter earlier. On the other hand, there were a total of 2 hedge funds with a bullish position in GEL a year ago. With hedgies’ sentiment swirling, there exists an “upper tier” of notable hedge fund managers who were adding to their stakes meaningfully (or already accumulated large positions). 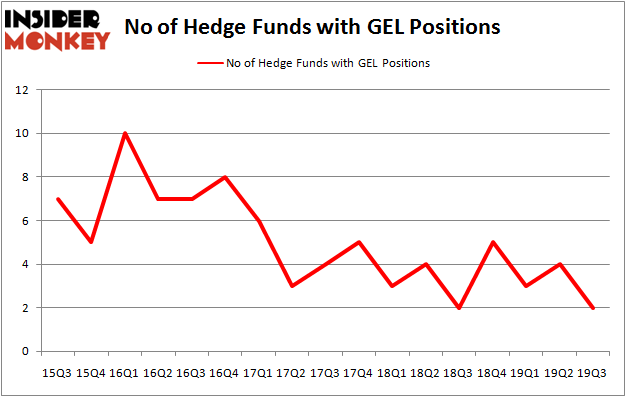 Seeing as Genesis Energy, L.P. (NYSE:GEL) has experienced bearish sentiment from the entirety of the hedge funds we track, logic holds that there lies a certain “tier” of hedgies that decided to sell off their positions entirely by the end of the third quarter. Interestingly, Perella Weinberg Partners dropped the largest stake of the “upper crust” of funds followed by Insider Monkey, worth about $4 million in stock. Robert B. Gillam’s fund, McKinley Capital Management, also sold off its stock, about $0.8 million worth. These moves are interesting, as total hedge fund interest was cut by 2 funds by the end of the third quarter.

As you can see these stocks had an average of 16.75 hedge funds with bullish positions and the average amount invested in these stocks was $190 million. That figure was $22 million in GEL’s case. Farfetch Limited (NYSE:FTCH) is the most popular stock in this table. On the other hand Piedmont Office Realty Trust, Inc. (NYSE:PDM) is the least popular one with only 8 bullish hedge fund positions. Compared to these stocks Genesis Energy, L.P. (NYSE:GEL) is even less popular than PDM. Hedge funds dodged a bullet by taking a bearish stance towards GEL. Our calculations showed that the top 20 most popular hedge fund stocks returned 34.7% in 2019 through November 22nd and outperformed the S&P 500 ETF (SPY) by 8.5 percentage points. Unfortunately GEL wasn’t nearly as popular as these 20 stocks (hedge fund sentiment was very bearish); GEL investors were disappointed as the stock returned -9.1% during the fourth quarter (through 11/22) and underperformed the market. If you are interested in investing in large cap stocks with huge upside potential, you should check out the top 20 most popular stocks among hedge funds as 70 percent of these stocks already outperformed the market so far in Q4.