Does National Storage Affiliates Trust (NYSE:NSA) represent a good buying opportunity at the moment? Let’s quickly check the hedge fund interest towards the company. Hedge fund firms constantly search out bright intellectuals and highly-experienced employees and throw away millions of dollars on satellite photos and other research activities, so it is no wonder why they tend to generate millions in profits each year. It is also true that some hedge fund players fail inconceivably on some occasions, but net net their stock picks have been generating superior risk-adjusted returns on average over the years.

National Storage Affiliates Trust (NYSE:NSA) was in 18 hedge funds’ portfolios at the end of the second quarter of 2019. NSA has experienced an increase in enthusiasm from smart money lately. There were 16 hedge funds in our database with NSA positions at the end of the previous quarter. Our calculations also showed that NSA isn’t among the 30 most popular stocks among hedge funds (see the video below).

According to most investors, hedge funds are seen as worthless, outdated investment vehicles of years past. While there are more than 8000 funds in operation at present, We choose to focus on the leaders of this group, around 750 funds. It is estimated that this group of investors command most of all hedge funds’ total capital, and by watching their first-class equity investments, Insider Monkey has come up with various investment strategies that have historically outperformed the broader indices. Insider Monkey’s flagship hedge fund strategy outrun the S&P 500 index by around 5 percentage points per year since its inception in May 2014. We were able to generate large returns even by identifying short candidates. Our portfolio of short stocks lost 25.7% since February 2017 (through September 30th) even though the market was up more than 33% during the same period. We just shared a list of 10 short targets in our latest quarterly update .

What have hedge funds been doing with National Storage Affiliates Trust (NYSE:NSA)?

Heading into the third quarter of 2019, a total of 18 of the hedge funds tracked by Insider Monkey were long this stock, a change of 13% from the previous quarter. The graph below displays the number of hedge funds with bullish position in NSA over the last 16 quarters. With the smart money’s capital changing hands, there exists an “upper tier” of noteworthy hedge fund managers who were upping their stakes considerably (or already accumulated large positions). 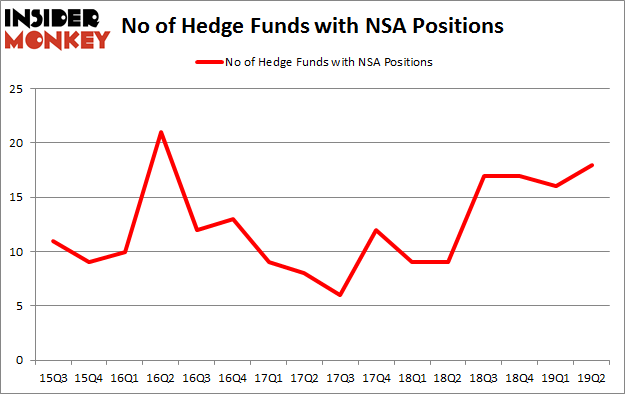 Of the funds tracked by Insider Monkey, Renaissance Technologies has the most valuable position in National Storage Affiliates Trust (NYSE:NSA), worth close to $44.2 million, accounting for less than 0.1%% of its total 13F portfolio. The second largest stake is held by Millennium Management, led by Israel Englander, holding a $20 million position; less than 0.1%% of its 13F portfolio is allocated to the company. Other professional money managers that are bullish include Paul Marshall and Ian Wace’s Marshall Wace LLP, David Harding’s Winton Capital Management and Jonathan Barrett and Paul Segal’s Luminus Management.

As industrywide interest jumped, some big names have been driving this bullishness. Luminus Management, managed by Jonathan Barrett and Paul Segal, established the largest position in National Storage Affiliates Trust (NYSE:NSA). Luminus Management had $9.7 million invested in the company at the end of the quarter. Benjamin A. Smith’s Laurion Capital Management also initiated a $0.9 million position during the quarter. The other funds with new positions in the stock are Matthew Tewksbury’s Stevens Capital Management, Richard Driehaus’s Driehaus Capital, and Michael Gelband’s ExodusPoint Capital.

As you can see these stocks had an average of 14.75 hedge funds with bullish positions and the average amount invested in these stocks was $112 million. That figure was $132 million in NSA’s case. SSR Mining Inc. (NASDAQ:SSRM) is the most popular stock in this table. On the other hand Silicon Motion Technology Corporation (NASDAQ:SIMO) is the least popular one with only 12 bullish hedge fund positions. Compared to these stocks National Storage Affiliates Trust (NYSE:NSA) is more popular among hedge funds. Our calculations showed that top 20 most popular stocks among hedge funds returned 24.4% in 2019 through September 30th and outperformed the S&P 500 ETF (SPY) by 4 percentage points. Hedge funds were also right about betting on NSA as the stock returned 16.4% during Q3 and outperformed the market by an even larger margin. Hedge funds were clearly right about piling into this stock relative to other stocks with similar market capitalizations.