CBS Corporation (NYSE:CBS) investors should pay attention to an increase in activity from the world’s largest hedge funds in recent months. CBS was in 50 hedge funds’ portfolios at the end of June. There were 46 hedge funds in our database with CBS positions at the end of the previous quarter. Our calculations also showed that CBS isn’t among the 30 most popular stocks among hedge funds (see the video below).

In the 21st century investor’s toolkit there are a multitude of indicators shareholders use to value their holdings. Two of the most underrated indicators are hedge fund and insider trading sentiment. Our experts have shown that, historically, those who follow the top picks of the elite investment managers can beat the broader indices by a healthy amount (see the details here).

Unlike some fund managers who are betting on Dow reaching 40000 in a year, our long-short investment strategy doesn’t rely on bull markets to deliver double digit returns. We only rely on hedge fund buy/sell signals. We’re going to take a glance at the key hedge fund action regarding CBS Corporation (NYSE:CBS). 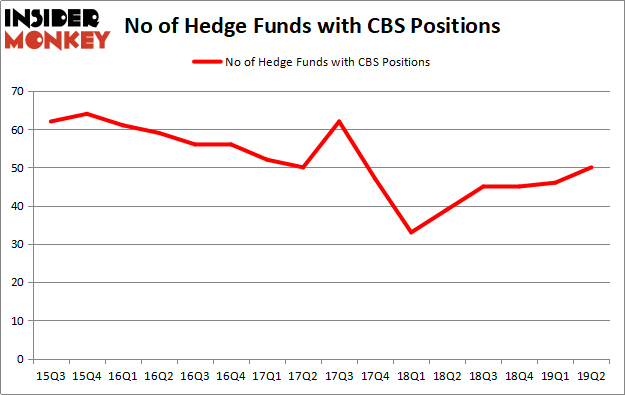 According to publicly available hedge fund and institutional investor holdings data compiled by Insider Monkey, Seth Klarman’s Baupost Group has the most valuable position in CBS Corporation (NYSE:CBS), worth close to $499 million, corresponding to 4.5% of its total 13F portfolio. Sitting at the No. 2 spot is Larry Robbins of Glenview Capital, with a $207 million position; the fund has 1.9% of its 13F portfolio invested in the stock. Some other peers that are bullish contain Cliff Asness’s AQR Capital Management, Brett Barakett’s Tremblant Capital and Ken Griffin’s Citadel Investment Group.

As aggregate interest increased, some big names have jumped into CBS Corporation (NYSE:CBS) headfirst. Holocene Advisors, managed by Brandon Haley, established the most outsized position in CBS Corporation (NYSE:CBS). Holocene Advisors had $62.3 million invested in the company at the end of the quarter. Steven Tananbaum’s GoldenTree Asset Management also initiated a $22.6 million position during the quarter. The other funds with new positions in the stock are James Parsons’s Junto Capital Management, Joel Greenblatt’s Gotham Asset Management, and Andy Redleaf’s Whitebox Advisors.

As you can see these stocks had an average of 29.75 hedge funds with bullish positions and the average amount invested in these stocks was $1117 million. That figure was $1709 million in CBS’s case. Snap Inc. (NYSE:SNAP) is the most popular stock in this table. On the other hand Pembina Pipeline Corp (NYSE:PBA) is the least popular one with only 12 bullish hedge fund positions. Compared to these stocks CBS Corporation (NYSE:CBS) is more popular among hedge funds. Our calculations showed that top 20 most popular stocks among hedge funds returned 24.4% in 2019 through September 30th and outperformed the S&P 500 ETF (SPY) by 4 percentage points. Unfortunately CBS wasn’t nearly as popular as these 20 stocks and hedge funds that were betting on CBS were disappointed as the stock returned -18.8% during the third quarter and underperformed the market. If you are interested in investing in large cap stocks with huge upside potential, you should check out the top 20 most popular stocks among hedge funds as many of these stocks already outperformed the market in Q3.