Hedge Funds Never Been This Bullish On Abbott Laboratories (ABT)

The latest 13F reporting period has come and gone, and Insider Monkey have plowed through 823 13F filings that hedge funds and well-known value investors are required to file by the SEC. The 13F filings show the funds’ and investors’ portfolio positions as of June 30th, when the S&P 500 Index was trading around the 3100 level. Since the end of March, investors decided to bet on the economic recovery and a stock market rebound. S&P 500 Index returned more than 50% since its bottom. In this article you are going to find out whether hedge funds thought Abbott Laboratories (NYSE:ABT) was a good investment heading into the third quarter and how the stock traded in comparison to the top hedge fund picks.

Is Abbott Laboratories (NYSE:ABT) a healthy stock for your portfolio? Investors who are in the know were turning bullish. The number of long hedge fund bets inched up by 5 recently. Abbott Laboratories (NYSE:ABT) was in 67 hedge funds’ portfolios at the end of June. The all time high for this statistics is 65. This means the bullish number of hedge fund positions in this stock currently sits at its all time high. Our calculations also showed that ABT isn’t among the 30 most popular stocks among hedge funds (click for Q2 rankings and see the video for a quick look at the top 5 stocks).

At Insider Monkey we scour multiple sources to uncover the next great investment idea. Currently, investors are pessimistic about commercial real estate investments. So, we are checking out this contrarian play to diversify our market exposure. We go through lists like the 10 most profitable companies in America to pick the best large-cap stocks to buy. Even though we recommend positions in only a tiny fraction of the companies we analyze, we check out as many stocks as we can. We read hedge fund investor letters and listen to stock pitches at hedge fund conferences. If you want to find out the best healthcare stock to buy right now, you can watch our latest hedge fund manager interview here. Keeping this in mind we’re going to check out the fresh hedge fund action encompassing Abbott Laboratories (NYSE:ABT). 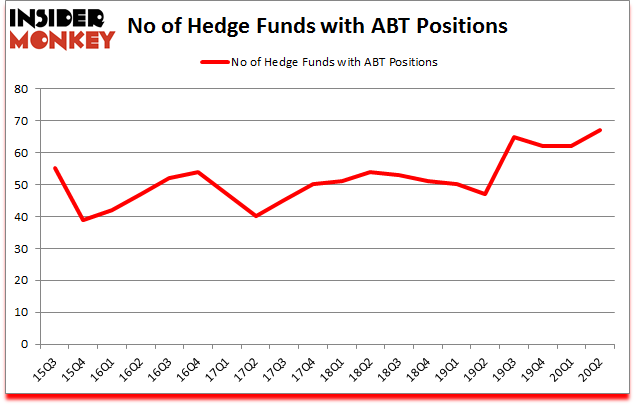 According to publicly available hedge fund and institutional investor holdings data compiled by Insider Monkey, GQG Partners, managed by Rajiv Jain, holds the most valuable position in Abbott Laboratories (NYSE:ABT). GQG Partners has a $1.1462 billion position in the stock, comprising 5.2% of its 13F portfolio. The second largest stake is held by Fisher Asset Management, led by Ken Fisher, holding a $631.3 million position; the fund has 0.6% of its 13F portfolio invested in the stock. Some other hedge funds and institutional investors that hold long positions encompass Ric Dillon’s Diamond Hill Capital, Phill Gross and Robert Atchinson’s Adage Capital Management and Ken Griffin’s Citadel Investment Group. In terms of the portfolio weights assigned to each position Blue Pool Capital allocated the biggest weight to Abbott Laboratories (NYSE:ABT), around 5.88% of its 13F portfolio. GQG Partners is also relatively very bullish on the stock, designating 5.17 percent of its 13F equity portfolio to ABT.

As aggregate interest increased, key hedge funds have been driving this bullishness. Balyasny Asset Management, managed by Dmitry Balyasny, assembled the largest position in Abbott Laboratories (NYSE:ABT). Balyasny Asset Management had $75.8 million invested in the company at the end of the quarter. Arthur B Cohen and Joseph Healey’s Healthcor Management LP also made a $58.3 million investment in the stock during the quarter. The other funds with new positions in the stock are Renaissance Technologies, Anand Parekh’s Alyeska Investment Group, and Alexander West’s Blue Pool Capital.

As you can see these stocks had an average of 42.1 hedge funds with bullish positions and the average amount invested in these stocks was $2374 million. That figure was $3504 million in ABT’s case. Thermo Fisher Scientific Inc. (NYSE:TMO) is the most popular stock in this table. On the other hand The Unilever Group (NYSE:UL) is the least popular one with only 13 bullish hedge fund positions. Abbott Laboratories (NYSE:ABT) is not the most popular stock in this group but hedge fund interest is still above average. Our overall hedge fund sentiment score for ABT is 85. Stocks with higher number of hedge fund positions relative to other stocks as well as relative to their historical range receive a higher sentiment score. Our calculations showed that top 10 most popular stocks among hedge funds returned 41.4% in 2019 and outperformed the S&P 500 ETF (SPY) by 10.1 percentage points. These stocks gained 28.2% in 2020 through August 24th but still beat the market by 20.6 percentage points. Hedge funds were also right about betting on ABT, though not to the same extent, as the stock returned 11.3% since the end of June and outperformed the market as well.