“The global economic environment is very favorable for investors. Economies are generally strong, but not too strong. Employment levels are among the strongest for many decades. Interest rates are paused at very low levels, and the risk of significant increases in the medium term seems low. Financing for transactions is freely available to good borrowers, but not in major excess. Covenants are lighter than they were five years ago, but the extreme excesses seen in the past do not seem prevalent yet today. Despite this apparent ‘goldilocks’ market environment, we continue to worry about a world where politics are polarized almost everywhere, interest rates are low globally, and equity valuations are at their peak,” are the words of Brookfield Asset Management. Brookfield was right about politics as stocks experienced their second worst May since the 1960s due to escalation of trade disputes. We pay attention to what hedge funds are doing in a particular stock before considering a potential investment because it works for us. So let’s take a glance at the smart money sentiment towards Franklin Street Properties Corp. (NYSE:FSP) and see how it was affected.

Franklin Street Properties Corp. (NYSE:FSP) was in 6 hedge funds’ portfolios at the end of June. FSP has seen a decrease in hedge fund sentiment of late. There were 8 hedge funds in our database with FSP positions at the end of the previous quarter. Our calculations also showed that FSP isn’t among the 30 most popular stocks among hedge funds (see the video below).

In the eyes of most investors, hedge funds are seen as underperforming, old financial tools of years past. While there are over 8000 funds trading at the moment, We look at the aristocrats of this club, around 750 funds. It is estimated that this group of investors control the majority of the smart money’s total asset base, and by paying attention to their top equity investments, Insider Monkey has identified a number of investment strategies that have historically outperformed the market. Insider Monkey’s flagship hedge fund strategy outpaced the S&P 500 index by around 5 percentage points annually since its inception in May 2014. We were able to generate large returns even by identifying short candidates. Our portfolio of short stocks lost 25.7% since February 2017 (through September 30th) even though the market was up more than 33% during the same period. We just shared a list of 10 short targets in our latest quarterly update . 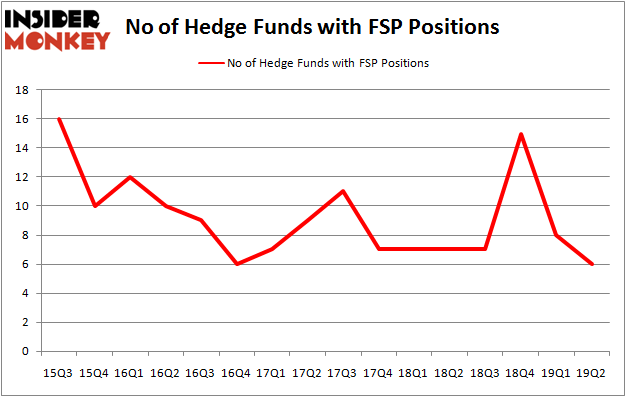 According to publicly available hedge fund and institutional investor holdings data compiled by Insider Monkey, Renaissance Technologies has the most valuable position in Franklin Street Properties Corp. (NYSE:FSP), worth close to $23.7 million, corresponding to less than 0.1%% of its total 13F portfolio. The second most bullish fund manager is Arrowstreet Capital, managed by Peter Rathjens, Bruce Clarke and John Campbell, which holds a $5.3 million position; the fund has less than 0.1%% of its 13F portfolio invested in the stock. Remaining peers that are bullish consist of Cliff Asness’s AQR Capital Management, Ken Griffin’s Citadel Investment Group and John Overdeck and David Siegel’s Two Sigma Advisors.

Seeing as Franklin Street Properties Corp. (NYSE:FSP) has faced bearish sentiment from the entirety of the hedge funds we track, logic holds that there were a few money managers that slashed their positions entirely in the second quarter. Interestingly, Paul Marshall and Ian Wace’s Marshall Wace LLP said goodbye to the biggest position of all the hedgies followed by Insider Monkey, totaling an estimated $0.9 million in stock. Michael Platt and William Reeves’s fund, BlueCrest Capital Mgmt., also cut its stock, about $0.1 million worth. These bearish behaviors are interesting, as total hedge fund interest was cut by 2 funds in the second quarter.

As you can see these stocks had an average of 7.25 hedge funds with bullish positions and the average amount invested in these stocks was $30 million. That figure was $33 million in FSP’s case. Systemax Inc. (NYSE:SYX) is the most popular stock in this table. On the other hand Origin Bancorp, Inc. (NASDAQ:OBNK) is the least popular one with only 4 bullish hedge fund positions. Franklin Street Properties Corp. (NYSE:FSP) is not the least popular stock in this group but hedge fund interest is still below average. Our calculations showed that top 20 most popular stocks among hedge funds returned 24.4% in 2019 through September 30th and outperformed the S&P 500 ETF (SPY) by 4 percentage points. A small number of hedge funds were also right about betting on FSP as the stock returned 16% during the same time frame and outperformed the market by an even larger margin.

Hedge Funds Have Never Been This Bullish On Camden National Corporation (CAC...
Monthly Newsletter Strategy
Download a free copy of our newsletter and see the details inside!
Hedge Fund Resource Center
Related News
Is Franklin Street Properties Corp. (FSP) A Good Stock To Buy? Franklin Street Properties Corp. (FSP): Are Hedge Funds Right About This Stock? 11 Largest Auto Insurance Companies In The US In 2019 10 Poorest Cities in America in 2019 8 Lowest Tar and Nicotine Cigarette Brands in 2019
Billionaire Hedge Funds