Insider Monkey has processed numerous 13F filings of hedge funds and successful value investors to create an extensive database of hedge fund holdings. The 13F filings show the hedge funds’ and successful investors’ positions as of the end of the third quarter. You can find articles about an individual hedge fund’s trades on numerous financial news websites. However, in this article we will take a look at their collective moves over the last 4 years and analyze what the smart money thinks of The Liberty SiriusXM Group (NASDAQ:LSXMA) based on that data. We also compare LSXMA’s sentiment against similarly valued peers like CrowdStrike Holdings, Inc. (NASDAQ:CRWD), Universal Health Services, Inc. (NYSE:UHS), Vistra Energy Corp. (NYSE:VST), and Fortinet Inc (NASDAQ:FTNT).

The Liberty SiriusXM Group (NASDAQ:LSXMA) investors should pay attention to an increase in support from the world’s most elite money managers of late. Our calculations also showed that LSXMA isn’t among the 30 most popular stocks among hedge funds (click for Q3 rankings and see the video below for Q2 rankings).

In the eyes of most investors, hedge funds are perceived as underperforming, old financial vehicles of the past. While there are over 8000 funds trading at present, Our experts hone in on the top tier of this club, around 750 funds. These money managers shepherd the lion’s share of all hedge funds’ total asset base, and by following their inimitable equity investments, Insider Monkey has found numerous investment strategies that have historically outstripped the broader indices. Insider Monkey’s flagship short hedge fund strategy outpaced the S&P 500 short ETFs by around 20 percentage points a year since its inception in May 2014. Our portfolio of short stocks lost 27.8% since February 2017 (through November 21st) even though the market was up more than 39% during the same period. We just shared a list of 7 short targets in our latest quarterly update .

Unlike the largest US hedge funds that are convinced Dow will soar past 40,000 or the world’s most bearish hedge fund that’s more convinced than ever that a crash is coming, our long-short investment strategy doesn’t rely on bull or bear markets to deliver double digit returns. We only rely on the best performing hedge funds‘ buy/sell signals. We’re going to analyze the recent hedge fund action surrounding The Liberty SiriusXM Group (NASDAQ:LSXMA).

What have hedge funds been doing with The Liberty SiriusXM Group (NASDAQ:LSXMA)?

At the end of the third quarter, a total of 39 of the hedge funds tracked by Insider Monkey held long positions in this stock, a change of 15% from the previous quarter. Below, you can check out the change in hedge fund sentiment towards LSXMA over the last 17 quarters. So, let’s find out which hedge funds were among the top holders of the stock and which hedge funds were making big moves. 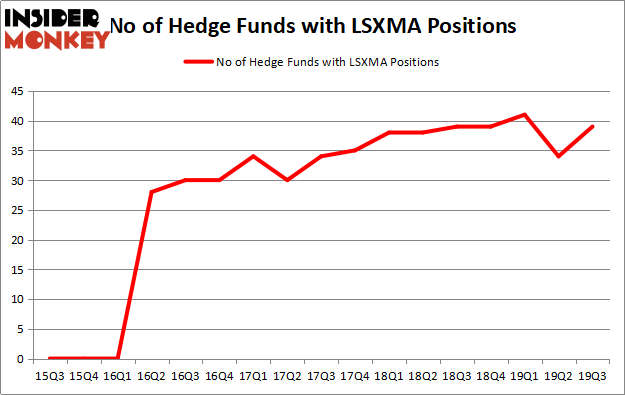 More specifically, Berkshire Hathaway was the largest shareholder of The Liberty SiriusXM Group (NASDAQ:LSXMA), with a stake worth $617.7 million reported as of the end of September. Trailing Berkshire Hathaway was D E Shaw, which amassed a stake valued at $140.1 million. FPR Partners, Citadel Investment Group, and Senator Investment Group were also very fond of the stock, becoming one of the largest hedge fund holders of the company. In terms of the portfolio weights assigned to each position Swift Run Capital Management allocated the biggest weight to The Liberty SiriusXM Group (NASDAQ:LSXMA), around 5.87% of its portfolio. Tiger Eye Capital is also relatively very bullish on the stock, designating 5.81 percent of its 13F equity portfolio to LSXMA.

Consequently, some big names were leading the bulls’ herd. Tiger Eye Capital, managed by Ben Gambill, initiated the most outsized position in The Liberty SiriusXM Group (NASDAQ:LSXMA). Tiger Eye Capital had $22.1 million invested in the company at the end of the quarter. Clint Carlson’s Carlson Capital also made a $3.2 million investment in the stock during the quarter. The following funds were also among the new LSXMA investors: Peter Rathjens, Bruce Clarke and John Campbell’s Arrowstreet Capital, Michael Gelband’s ExodusPoint Capital, and Benjamin A. Smith’s Laurion Capital Management.

As you can see these stocks had an average of 33.5 hedge funds with bullish positions and the average amount invested in these stocks was $1102 million. That figure was $1485 million in LSXMA’s case. Vistra Energy Corp. (NYSE:VST) is the most popular stock in this table. On the other hand Universal Health Services, Inc. (NYSE:UHS) is the least popular one with only 26 bullish hedge fund positions. The Liberty SiriusXM Group (NASDAQ:LSXMA) is not the most popular stock in this group but hedge fund interest is still above average. Our calculations showed that top 20 most popular stocks among hedge funds returned 37.4% in 2019 through the end of November and outperformed the S&P 500 ETF (SPY) by 9.9 percentage points. Hedge funds were also right about betting on LSXMA as the stock returned 17.2% during the fourth quarter (through the end of November) and outperformed the market. Hedge funds were rewarded for their relative bullishness.