Last year’s fourth quarter was a rough one for investors and many hedge funds, which were naturally unable to overcome the big dip in the broad market, as the S&P 500 fell by about 4.8% during 2018 and average hedge fund losing about 1%. The Russell 2000, composed of smaller companies, performed even worse, trailing the S&P by more than 6 percentage points, as investors fled less-known quantities for safe havens. Luckily hedge funds were shifting their holdings into large-cap stocks. The 20 most popular hedge fund stocks actually generated an average return of 37.4% in 2019 (through the end of November) and outperformed the S&P 500 ETF by 9.9 percentage points. We are done processing the latest 13F filings and in this article we will study how hedge fund sentiment towards Perspecta Inc. (NYSE:PRSP) changed during the first quarter.

Hedge fund interest in Perspecta Inc. (NYSE:PRSP) shares was flat at the end of last quarter. This is usually a negative indicator. At the end of this article we will also compare PRSP to other stocks including Service Properties Trust (NASDAQ:SVC), Tempur Sealy International Inc. (NYSE:TPX), and MSA Safety Incorporated (NYSE:MSA) to get a better sense of its popularity.

To most shareholders, hedge funds are perceived as underperforming, old investment vehicles of the past. While there are over 8000 funds trading at the moment, Our researchers choose to focus on the top tier of this club, approximately 750 funds. These hedge fund managers manage most of all hedge funds’ total capital, and by observing their unrivaled stock picks, Insider Monkey has revealed a few investment strategies that have historically defeated the broader indices. Insider Monkey’s flagship short hedge fund strategy defeated the S&P 500 short ETFs by around 20 percentage points per year since its inception in May 2014. Our portfolio of short stocks lost 27.8% since February 2017 (through November 21st) even though the market was up more than 39% during the same period. We just shared a list of 7 short targets in our latest quarterly update .

Unlike the largest US hedge funds that are convinced Dow will soar past 40,000 or the world’s most bearish hedge fund that’s more convinced than ever that a crash is coming, our long-short investment strategy doesn’t rely on bull or bear markets to deliver double digit returns. We only rely on the best performing hedge funds‘ buy/sell signals. Let’s analyze the recent hedge fund action regarding Perspecta Inc. (NYSE:PRSP).

Heading into the fourth quarter of 2019, a total of 40 of the hedge funds tracked by Insider Monkey held long positions in this stock, a change of 0% from the previous quarter. Below, you can check out the change in hedge fund sentiment towards PRSP over the last 17 quarters. So, let’s review which hedge funds were among the top holders of the stock and which hedge funds were making big moves. 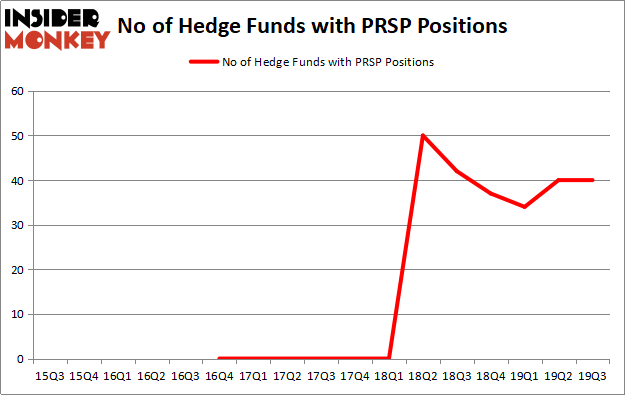 Because Perspecta Inc. (NYSE:PRSP) has witnessed falling interest from the smart money, it’s easy to see that there were a few money managers that slashed their positions entirely in the third quarter. It’s worth mentioning that Robert Pohly’s Samlyn Capital cut the biggest stake of all the hedgies watched by Insider Monkey, totaling close to $27.2 million in stock, and David Rosen’s Rubric Capital Management was right behind this move, as the fund said goodbye to about $20.3 million worth. These transactions are important to note, as total hedge fund interest stayed the same (this is a bearish signal in our experience).Among these funds, Maverick Capital held the most valuable stake in Perspecta Inc. (NYSE:PRSP), which was worth $177.8 million at the end of the third quarter. On the second spot was Dorsal Capital Management which amassed $67.9 million worth of shares. Freshford Capital Management, Sunriver Management, and Crescent Park Management were also very fond of the stock, becoming one of the largest hedge fund holders of the company. In terms of the portfolio weights assigned to each position Bodenholm Capital allocated the biggest weight to Perspecta Inc. (NYSE:PRSP), around 14.78% of its portfolio. Freshford Capital Management is also relatively very bullish on the stock, earmarking 9.41 percent of its 13F equity portfolio to PRSP.

As you can see these stocks had an average of 15.5 hedge funds with bullish positions and the average amount invested in these stocks was $375 million. That figure was $719 million in PRSP’s case. Tempur Sealy International Inc. (NYSE:TPX) is the most popular stock in this table. On the other hand MSA Safety Incorporated (NYSE:MSA) is the least popular one with only 9 bullish hedge fund positions. Compared to these stocks Perspecta Inc. (NYSE:PRSP) is more popular among hedge funds. Our calculations showed that top 20 most popular stocks among hedge funds returned 37.4% in 2019 through the end of November and outperformed the S&P 500 ETF (SPY) by 9.9 percentage points. Unfortunately PRSP wasn’t nearly as popular as these 20 stocks and hedge funds that were betting on PRSP were disappointed as the stock returned 5.6% during the first two months of the fourth quarter and underperformed the market. If you are interested in investing in large cap stocks with huge upside potential, you should check out the top 20 most popular stocks among hedge funds as 70 percent of these stocks already outperformed the market in Q4.