Hedge Funds Love MicroStrategy Incorporated (MSTR), But Not Quite As Much

The 700+ hedge funds and money managers tracked by Insider Monkey have already compiled and submitted their 13F filings for the third quarter, which unveil their equity positions as of September 30. We went through these filings, fixed typos and other more significant errors and identified the changes in hedge fund positions. Our extensive review of these public filings is finally over, so this article is set to reveal the smart money sentiment towards MicroStrategy Incorporated (NASDAQ:MSTR).

Is MicroStrategy Incorporated (NASDAQ:MSTR) an attractive investment right now? Money managers are becoming less hopeful. The number of bullish hedge fund positions were cut by 3 lately. MSTR was in 23 hedge funds’ portfolios at the end of September. There were 26 hedge funds in our database with MSTR holdings at the end of the previous quarter. At the end of this article we will also compare MSTR to other stocks including Rexnord Corp (NYSE:RXN), Watts Water Technologies Inc (NYSE:WTS), and Pretium Resources Inc (NYSE:PVG) to get a better sense of its popularity.

At the end of the third quarter, a total of 23 of the hedge funds tracked by Insider Monkey were long this stock, a drop of 12% from the second quarter of 2016, as hedge fund ownership of MSTR falls to its lowest point in 5 quarters. With hedge funds’ positions undergoing their usual ebb and flow, there exists a select group of key hedge fund managers who were upping their holdings significantly (or already accumulated large positions). 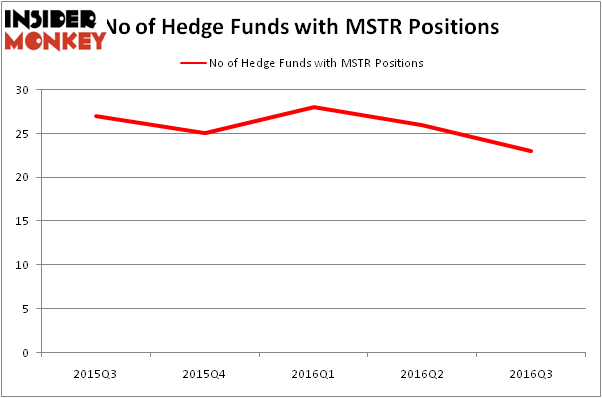