The 800+ hedge funds and famous money managers tracked by Insider Monkey have already compiled and submitted their 13F filings for the third quarter, which unveil their equity positions as of September 30. We went through these filings, fixed typos and other more significant errors and identified the changes in hedge fund portfolios. Our extensive review of these public filings is finally over, so this article is set to reveal the smart money sentiment towards Sea Limited (NYSE:SE).

Sea Limited (NYSE:SE) was in 95 hedge funds’ portfolios at the end of the third quarter of 2020. The all time high for this statistics is 82. This means the bullish number of hedge fund positions in this stock currently sits at its all time high. SE has seen an increase in hedge fund sentiment lately. There were 82 hedge funds in our database with SE positions at the end of the second quarter. Our calculations also showed that SE ranked 20th among the 30 most popular stocks among hedge funds (click for Q3 rankings and see the video for a quick look at the top 5 stocks).

At Insider Monkey we leave no stone unturned when looking for the next great investment idea. For example, we believe electric vehicles and energy storage are set to become giant markets. Tesla’s stock price skyrocketed, yet lithium prices are still below their 2019 highs. So, we are checking out this lithium stock right now. We go through lists like the 15 best blue chip stocks to buy to pick the best large-cap stocks to buy. Even though we recommend positions in only a tiny fraction of the companies we analyze, we check out as many stocks as we can. We read hedge fund investor letters and listen to stock pitches at hedge fund conferences. You can subscribe to our free daily newsletter on our website. Keeping this in mind we’re going to go over the fresh hedge fund action regarding Sea Limited (NYSE:SE).

At the end of September, a total of 95 of the hedge funds tracked by Insider Monkey were bullish on this stock, a change of 16% from one quarter earlier. On the other hand, there were a total of 69 hedge funds with a bullish position in SE a year ago. With hedgies’ positions undergoing their usual ebb and flow, there exists an “upper tier” of notable hedge fund managers who were upping their stakes meaningfully (or already accumulated large positions). 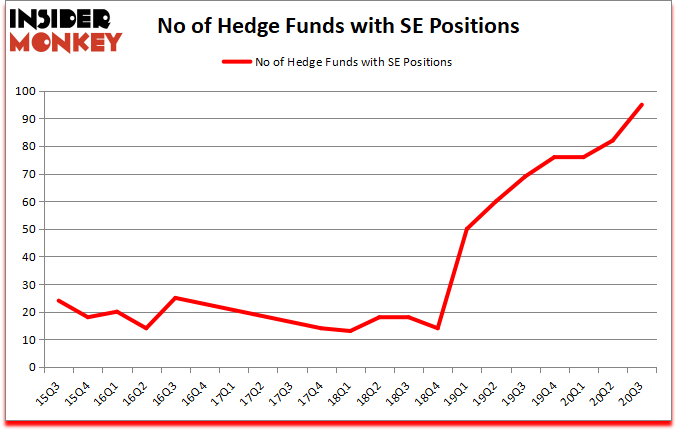 The largest stake in Sea Limited (NYSE:SE) was held by Tiger Global Management LLC, which reported holding $1287.7 million worth of stock at the end of September. It was followed by Kora Management with a $597.7 million position. Other investors bullish on the company included GQG Partners, Coatue Management, and Alkeon Capital Management. In terms of the portfolio weights assigned to each position Karst Peak Capital allocated the biggest weight to Sea Limited (NYSE:SE), around 76.96% of its 13F portfolio. Kora Management is also relatively very bullish on the stock, setting aside 69.97 percent of its 13F equity portfolio to SE.

Consequently, key hedge funds were leading the bulls’ herd. Holocene Advisors, managed by Brandon Haley, created the most outsized position in Sea Limited (NYSE:SE). Holocene Advisors had $160.7 million invested in the company at the end of the quarter. Larry Chen and Terry Zhang’s Tairen Capital also made a $24.5 million investment in the stock during the quarter. The following funds were also among the new SE investors: Neal Nathani and Darren Dinneen’s Totem Point Management, Sander Gerber’s Hudson Bay Capital Management, and Phill Gross and Robert Atchinson’s Adage Capital Management.

As you can see these stocks had an average of 54.3 hedge funds with bullish positions and the average amount invested in these stocks was $4459 million. That figure was $7818 million in SE’s case. JD.Com Inc (NASDAQ:JD) is the most popular stock in this table. On the other hand KE Holdings Inc. (NYSE:BEKE) is the least popular one with only 28 bullish hedge fund positions. Compared to these stocks Sea Limited (NYSE:SE) is more popular among hedge funds. Our overall hedge fund sentiment score for SE is 90.5. Stocks with higher number of hedge fund positions relative to other stocks as well as relative to their historical range receive a higher sentiment score. Our calculations showed that top 20 most popular stocks among hedge funds returned 41.3% in 2019 and outperformed the S&P 500 ETF (SPY) by 10 percentage points. These stocks returned 28.1% in 2020 through November 23rd but still managed to beat the market by 15.4 percentage points. Hedge funds were also right about betting on SE as the stock returned 18.7% since the end of September (through 11/23) and outperformed the market by an even larger margin. Hedge funds were clearly right about piling into this stock relative to other stocks with similar market capitalizations.