Most investors tend to think that hedge funds and other asset managers are worthless, as they cannot beat even simple index fund portfolios. In fact, most people expect hedge funds to compete with and outperform the bull market that we have witnessed over the past few years. However, hedge funds are generally partially hedged and aim at delivering attractive risk-adjusted returns rather than following the ups and downs of equity markets hoping that they will outperform the broader market. Our research shows that hedge funds do have great stock picking skills, so let’s take a glance at the smart money sentiment towards Sonoco Products Company (NYSE:SON).

After hedge fund sentiment soured on Sonoco during the prior 2 quarters, it rebounded in a big way during Q2, rising by 43% and early filings for Q3 are showing signs of more buying. One of the new buyers in Q2 was billionaire and bestselling author Ray Dalio’s Bridgewater Associates (8,148 shares). With its 36 year run of paying dividends, Sonoco placed 15th on our list of the 25 Best Dividend Stocks for Retirement.

At Q3’s end, a total of 20 of the hedge funds tracked by Insider Monkey were long this stock, a 43% jump from one quarter earlier. The graph below displays the number of hedge funds with bullish position in SON over the last 6 quarters. With the smart money’s capital changing hands, there exists a few notable hedge fund managers who were increasing their holdings significantly (or already accumulated large positions). 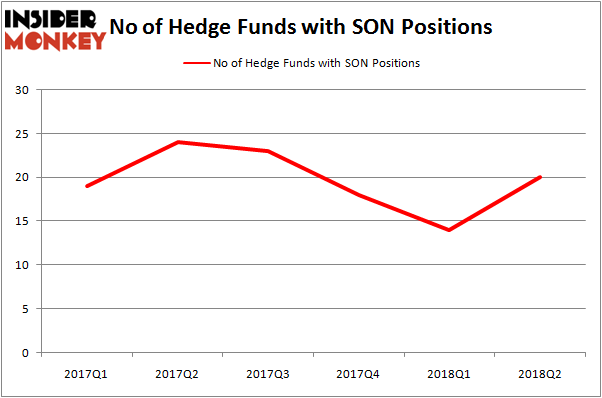 As you can see these stocks had an average of 18 hedge funds with bullish positions and the average amount invested in these stocks was $490 million. That figure was $110 million in SON’s case. Loxo Oncology Inc (NASDAQ:LOXO) is the most popular stock in this table. On the other hand Grupo Aeroportuario del Pacifico (ADR) (NYSE:PAC) is the least popular one with only 3 bullish hedge fund positions. Sonoco Products Company (NYSE:SON) is not the most popular stock in this group but hedge fund interest is still above average and rising. This is a slightly positive signal but we’d rather spend our time researching stocks that hedge funds are piling on. In this regard LOXO might be a better candidate to consider a long position in, though we recommend dividend investors consider adding Sonoco to their income generating portfolio.