Hedge Funds Have Never Been This Bullish On Zynga Inc (ZNGA)

With the first-quarter round of 13F filings behind us it is time to take a look at the stocks in which some of the best money managers in the world preferred to invest or sell heading into the second quarter. One of these stocks was Zynga Inc (NASDAQ:ZNGA).

Is Zynga Inc (NASDAQ:ZNGA) ready to rally soon? Investors who are in the know are turning bullish. The number of long hedge fund bets moved up by 13 recently. Our calculations also showed that ZNGA isn’t among the 30 most popular stocks among hedge funds (view the video below). ZNGA was in 48 hedge funds’ portfolios at the end of the second quarter of 2019. There were 35 hedge funds in our database with ZNGA positions at the end of the previous quarter. 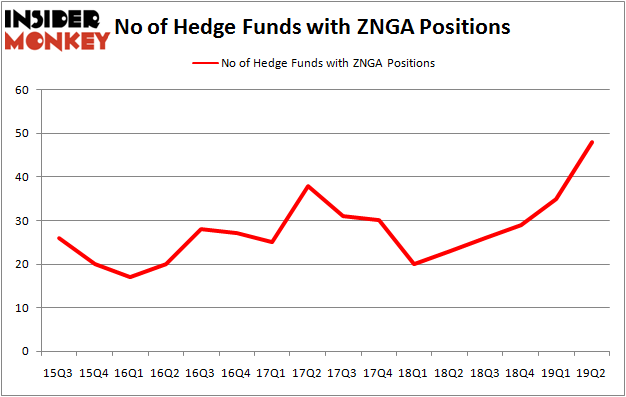 Unlike some fund managers who are betting on Dow reaching 40000 in a year, our long-short investment strategy doesn’t rely on bull markets to deliver double digit returns. We only rely on hedge fund buy/sell signals. Let’s take a look at the new hedge fund action regarding Zynga Inc (NASDAQ:ZNGA).

Heading into the third quarter of 2019, a total of 48 of the hedge funds tracked by Insider Monkey were long this stock, a change of 37% from one quarter earlier. On the other hand, there were a total of 23 hedge funds with a bullish position in ZNGA a year ago. With hedgies’ capital changing hands, there exists an “upper tier” of key hedge fund managers who were increasing their holdings substantially (or already accumulated large positions).

Of the funds tracked by Insider Monkey, Citadel Investment Group, managed by Ken Griffin, holds the number one position in Zynga Inc (NASDAQ:ZNGA). Citadel Investment Group has a $152.5 million position in the stock, comprising 0.1% of its 13F portfolio. Sitting at the No. 2 spot is Cadian Capital, managed by Eric Bannasch, which holds a $127.7 million position; the fund has 5.8% of its 13F portfolio invested in the stock. Remaining hedge funds and institutional investors that hold long positions contain David Cohen and Harold Levy’s Iridian Asset Management, Renaissance Technologies and D. E. Shaw’s D E Shaw.

As you can see these stocks had an average of 19.25 hedge funds with bullish positions and the average amount invested in these stocks was $296 million. That figure was $1138 million in ZNGA’s case. Monolithic Power Systems, Inc. (NASDAQ:MPWR) is the most popular stock in this table. On the other hand Antero Midstream Corp (NYSE:AM) is the least popular one with only 15 bullish hedge fund positions. Compared to these stocks Zynga Inc (NASDAQ:ZNGA) is more popular among hedge funds. Our calculations showed that top 20 most popular stocks among hedge funds returned 24.4% in 2019 through September 30th and outperformed the S&P 500 ETF (SPY) by 4 percentage points. Unfortunately ZNGA wasn’t nearly as popular as these 20 stocks and hedge funds that were betting on ZNGA were disappointed as the stock returned -5.1% during the third quarter and underperformed the market. If you are interested in investing in large cap stocks with huge upside potential, you should check out the top 20 most popular stocks among hedge funds as many of these stocks already outperformed the market in Q3.