Is Zayo Group Holdings Inc (NYSE:ZAYO) undervalued? The smart money is buying. The number of long hedge fund bets advanced by 5 in recent months. Our calculations also showed that ZAYO isn’t among the 30 most popular stocks among hedge funds.

Today there are a multitude of signals stock market investors put to use to appraise publicly traded companies. A duo of the most underrated signals are hedge fund and insider trading indicators. We have shown that, historically, those who follow the best picks of the elite investment managers can outclass their index-focused peers by a solid amount (see the details here).

At the end of the first quarter, a total of 61 of the hedge funds tracked by Insider Monkey were long this stock, a change of 9% from one quarter earlier. The graph below displays the number of hedge funds with bullish position in ZAYO over the last 15 quarters. With hedge funds’ positions undergoing their usual ebb and flow, there exists a select group of noteworthy hedge fund managers who were upping their stakes substantially (or already accumulated large positions). 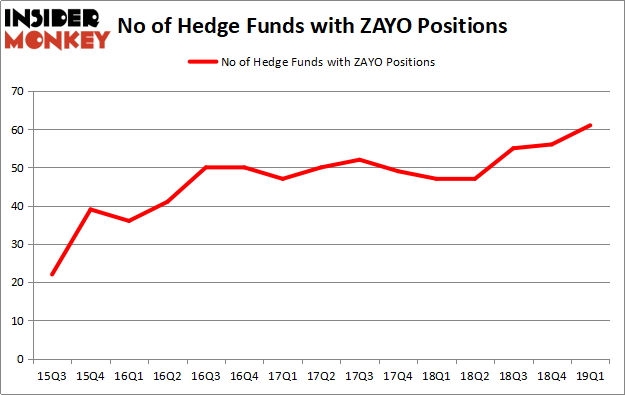 Among these funds, Citadel Investment Group held the most valuable stake in Zayo Group Holdings Inc (NYSE:ZAYO), which was worth $222.1 million at the end of the first quarter. On the second spot was Sachem Head Capital which amassed $164.8 million worth of shares. Moreover, Senator Investment Group, Eminence Capital, and Starboard Value LP were also bullish on Zayo Group Holdings Inc (NYSE:ZAYO), allocating a large percentage of their portfolios to this stock.

As you can see these stocks had an average of 19 hedge funds with bullish positions and the average amount invested in these stocks was $434 million. That figure was $1681 million in ZAYO’s case. Genpact Limited (NYSE:G) is the most popular stock in this table. On the other hand Gerdau SA (NYSE:GGB) is the least popular one with only 10 bullish hedge fund positions. Compared to these stocks Zayo Group Holdings Inc (NYSE:ZAYO) is more popular among hedge funds. Our calculations showed that top 20 most popular stocks among hedge funds returned 1.9% in Q2 through May 30th and outperformed the S&P 500 ETF (SPY) by more than 3 percentage points. Hedge funds were also right about betting on ZAYO as the stock returned 14.4% during the same period and outperformed the market by an even larger margin. Hedge funds were clearly right about piling into this stock relative to other stocks with similar market capitalizations.