Hedge Funds Have Never Been This Bullish On West Pharmaceutical Services Inc. (WST)

A whopping number of 13F filings filed with U.S. Securities and Exchange Commission has been processed by Insider Monkey so that individual investors can look at the overall hedge fund sentiment towards the stocks included in their watchlists. These freshly-submitted public filings disclose money managers’ equity positions as of the end of the three-month period that ended June 28, so let’s proceed with the discussion of the hedge fund sentiment on West Pharmaceutical Services Inc. (NYSE:WST).

West Pharmaceutical Services Inc. (NYSE:WST) was in 24 hedge funds’ portfolios at the end of June. WST investors should be aware of an increase in hedge fund interest recently. There were 21 hedge funds in our database with WST holdings at the end of the previous quarter. Our calculations also showed that WST isn’t among the 30 most popular stocks among hedge funds (see the video below).

To the average investor there are numerous signals stock traders have at their disposal to analyze publicly traded companies. Two of the most innovative signals are hedge fund and insider trading signals. Our experts have shown that, historically, those who follow the best picks of the elite hedge fund managers can outclass the market by a solid margin (see the details here). 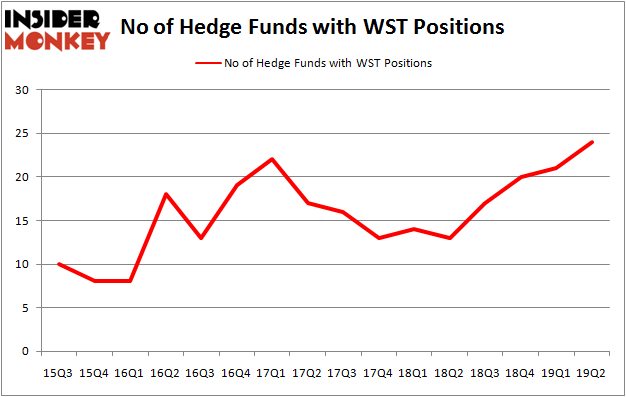 Unlike this former hedge fund manager who is convinced Dow will soar past 40000, our long-short investment strategy doesn’t rely on bull markets to deliver double digit returns. We only rely on hedge fund buy/sell signals. Let’s go over the recent hedge fund action regarding West Pharmaceutical Services Inc. (NYSE:WST).

How have hedgies been trading West Pharmaceutical Services Inc. (NYSE:WST)?

Heading into the third quarter of 2019, a total of 24 of the hedge funds tracked by Insider Monkey were long this stock, a change of 14% from the previous quarter. The graph below displays the number of hedge funds with bullish position in WST over the last 16 quarters. With the smart money’s sentiment swirling, there exists a few notable hedge fund managers who were increasing their holdings significantly (or already accumulated large positions).

According to Insider Monkey’s hedge fund database, Fisher Asset Management, managed by Ken Fisher, holds the largest position in West Pharmaceutical Services Inc. (NYSE:WST). Fisher Asset Management has a $113.3 million position in the stock, comprising 0.1% of its 13F portfolio. The second most bullish fund is Renaissance Technologies, with a $38.7 million position; the fund has less than 0.1%% of its 13F portfolio invested in the stock. Remaining members of the smart money that are bullish include Barry Dargan’s Intermede Investment Partners, Cliff Asness’s AQR Capital Management and Israel Englander’s Millennium Management.

Now, some big names have been driving this bullishness. LMR Partners, managed by Ben Levine, Andrew Manuel and Stefan Renold, created the most valuable position in West Pharmaceutical Services Inc. (NYSE:WST). LMR Partners had $2.7 million invested in the company at the end of the quarter. Dmitry Balyasny’s Balyasny Asset Management also made a $2.4 million investment in the stock during the quarter. The other funds with new positions in the stock are Robert B. Gillam’s McKinley Capital Management, Michael Gelband’s ExodusPoint Capital, and Phil Frohlich’s Prescott Group Capital Management.

As you can see these stocks had an average of 20.75 hedge funds with bullish positions and the average amount invested in these stocks was $259 million. That figure was $318 million in WST’s case. Snap-on Incorporated (NYSE:SNA) is the most popular stock in this table. On the other hand Iron Mountain Incorporated (NYSE:IRM) is the least popular one with only 14 bullish hedge fund positions. West Pharmaceutical Services Inc. (NYSE:WST) is not the most popular stock in this group but hedge fund interest is still above average. Our calculations showed that top 20 most popular stocks among hedge funds returned 24.4% in 2019 through September 30th and outperformed the S&P 500 ETF (SPY) by 4 percentage points. Hedge funds were also right about betting on WST as the stock returned 13.5% during the third quarter and outperformed the market. Hedge funds were rewarded for their relative bullishness.