Hedge Funds Have Never Been This Bullish On West Bancorporation, Inc. (WTBA)

Our extensive research has shown that imitating the smart money can generate significant returns for retail investors, which is why we track nearly 750 active prominent money managers and analyze their quarterly 13F filings. The stocks that are heavily bought by hedge funds historically outperformed the market, though there is no shortage of high profile failures like hedge funds’ 2018 losses in Facebook and Apple. Let’s take a closer look at what the funds we track think about West Bancorporation, Inc. (NASDAQ:WTBA) in this article.

West Bancorporation, Inc. (NASDAQ:WTBA) investors should be aware of an increase in hedge fund sentiment of late. WTBA was in 4 hedge funds’ portfolios at the end of the second quarter of 2019. There were 2 hedge funds in our database with WTBA holdings at the end of the previous quarter. Our calculations also showed that WTBA isn’t among the 30 most popular stocks among hedge funds (see the video below).

Unlike other investors who track every movement of the 25 largest hedge funds, our long-short investment strategy relies on hedge fund buy/sell signals given by the 100 best performing hedge funds. Let’s check out the latest hedge fund action encompassing West Bancorporation, Inc. (NASDAQ:WTBA).

What have hedge funds been doing with West Bancorporation, Inc. (NASDAQ:WTBA)? 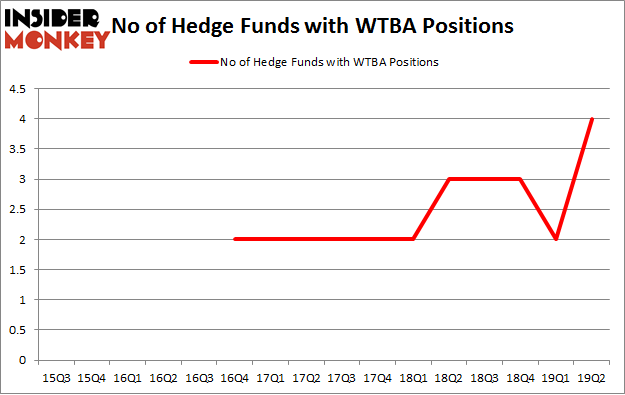 According to Insider Monkey’s hedge fund database, Renaissance Technologies has the biggest position in West Bancorporation, Inc. (NASDAQ:WTBA), worth close to $7.5 million, corresponding to less than 0.1%% of its total 13F portfolio. Coming in second is Driehaus Capital, led by Richard Driehaus, holding a $0.6 million position; less than 0.1%% of its 13F portfolio is allocated to the stock. Some other peers that hold long positions comprise Israel Englander’s Millennium Management, Gavin Saitowitz and Cisco J. del Valle’s Springbok Capital and .

As one would reasonably expect, key hedge funds were breaking ground themselves. Driehaus Capital, managed by Richard Driehaus, assembled the most outsized position in West Bancorporation, Inc. (NASDAQ:WTBA). Driehaus Capital had $0.6 million invested in the company at the end of the quarter. Gavin Saitowitz and Cisco J. del Valle’s Springbok Capital also initiated a $0 million position during the quarter.

As you can see these stocks had an average of 11.75 hedge funds with bullish positions and the average amount invested in these stocks was $48 million. That figure was $8 million in WTBA’s case. Hibbett Sports, Inc. (NASDAQ:HIBB) is the most popular stock in this table. On the other hand Bridgewater Bancshares, Inc. (NASDAQ:BWB) is the least popular one with only 6 bullish hedge fund positions. Compared to these stocks West Bancorporation, Inc. (NASDAQ:WTBA) is even less popular than BWB. Our calculations showed that top 20 most popular stocks among hedge funds returned 24.4% in 2019 through September 30th and outperformed the S&P 500 ETF (SPY) by 4 percentage points. A small number of hedge funds were also right about betting on WTBA, though not to the same extent, as the stock returned 3.5% during the third quarter and outperformed the market as well.

Did Hedge Funds Drop The Ball On Cutera, Inc. (CUTR) ?
Monthly Newsletter Strategy
Download a free copy of our newsletter and see the details inside!
Hedge Fund Resource Center
Related News
This Metric Says You Are Smart to Sell Southwest Bancorp, Inc. (OKSB) 11 Largest Auto Insurance Companies In The US In 2019 10 Poorest Cities in America in 2019 8 Lowest Tar and Nicotine Cigarette Brands in 2019
Billionaire Hedge Funds