The latest 13F reporting period has come and gone, and Insider Monkey is again at the forefront when it comes to making use of this gold mine of data. We at Insider Monkey have plowed through 752 13F filings that hedge funds and well-known value investors are required to file by the SEC. The 13F filings show the funds’ and investors’ portfolio positions as of September 30th. In this article we look at what those investors think of Wesco Aircraft Holdings Inc (NYSE:WAIR).

Is Wesco Aircraft Holdings Inc (NYSE:WAIR) going to take off soon? Hedge funds are becoming more confident. The number of long hedge fund bets inched up by 2 in recent months. Our calculations also showed that WAIR isn’t among the 30 most popular stocks among hedge funds (click for Q3 rankings and see the video below for Q2 rankings). WAIR was in 23 hedge funds’ portfolios at the end of the third quarter of 2019. There were 21 hedge funds in our database with WAIR positions at the end of the previous quarter.

Unlike the largest US hedge funds that are convinced Dow will soar past 40,000 or the world’s most bearish hedge fund that’s more convinced than ever that a crash is coming, our long-short investment strategy doesn’t rely on bull or bear markets to deliver double digit returns. We only rely on the best performing hedge funds‘ buy/sell signals. We’re going to analyze the latest hedge fund action regarding Wesco Aircraft Holdings Inc (NYSE:WAIR). 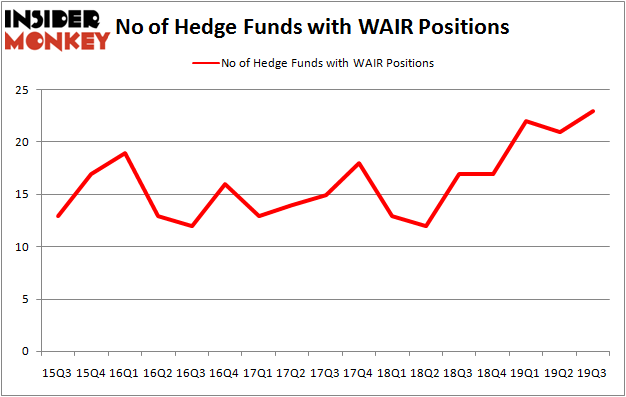 More specifically, Makaira Partners was the largest shareholder of Wesco Aircraft Holdings Inc (NYSE:WAIR), with a stake worth $76.6 million reported as of the end of September. Trailing Makaira Partners was Alpine Associates, which amassed a stake valued at $46 million. Glazer Capital, Water Island Capital, and Cove Street Capital were also very fond of the stock, becoming one of the largest hedge fund holders of the company. In terms of the portfolio weights assigned to each position Makaira Partners allocated the biggest weight to Wesco Aircraft Holdings Inc (NYSE:WAIR), around 12.19% of its 13F portfolio. Glazer Capital is also relatively very bullish on the stock, designating 2.56 percent of its 13F equity portfolio to WAIR.

As one would reasonably expect, some big names have been driving this bullishness. Alpine Associates, managed by Robert Emil Zoellner, assembled the most valuable position in Wesco Aircraft Holdings Inc (NYSE:WAIR). Alpine Associates had $46 million invested in the company at the end of the quarter. Paul Glazer’s Glazer Capital also initiated a $20.9 million position during the quarter. The other funds with new positions in the stock are John Orrico’s Water Island Capital, Mario Gabelli’s GAMCO Investors, and Dmitry Balyasny’s Balyasny Asset Management.

As you can see these stocks had an average of 10.5 hedge funds with bullish positions and the average amount invested in these stocks was $51 million. That figure was $226 million in WAIR’s case. Virtusa Corporation (NASDAQ:VRTU) is the most popular stock in this table. On the other hand Geopark Ltd (NYSE:GPRK) is the least popular one with only 8 bullish hedge fund positions. Compared to these stocks Wesco Aircraft Holdings Inc (NYSE:WAIR) is more popular among hedge funds. Our calculations showed that top 20 most popular stocks among hedge funds returned 37.4% in 2019 through the end of November and outperformed the S&P 500 ETF (SPY) by 9.9 percentage points. Unfortunately WAIR wasn’t nearly as popular as these 20 stocks and hedge funds that were betting on WAIR were disappointed as the stock returned -0.5% during the first two months of the fourth quarter and underperformed the market. If you are interested in investing in large cap stocks with huge upside potential, you should check out the top 20 most popular stocks among hedge funds as 70 percent of these stocks already outperformed the market in Q4.