Hedge Funds Have Never Been This Bullish On Waterstone Financial, Inc. (WSBF)

The financial regulations require hedge funds and wealthy investors that exceeded the $100 million equity holdings threshold to file a report that shows their positions at the end of every quarter. Even though it isn’t the intention, these filings to a certain extent level the playing field for ordinary investors. The latest round of 13F filings disclosed the funds’ positions on September 30th. We at Insider Monkey have made an extensive database of nearly 750 of those established hedge funds and famous value investors’ filings. In this article, we analyze how these elite funds and prominent investors traded Waterstone Financial, Inc. (NASDAQ:WSBF) based on those filings.

Is Waterstone Financial, Inc. (NASDAQ:WSBF) ready to rally soon? The best stock pickers are getting more bullish. The number of long hedge fund positions rose by 2 recently. Our calculations also showed that WSBF isn’t among the 30 most popular stocks among hedge funds (click for Q3 rankings and see the video below for Q2 rankings). WSBF was in 17 hedge funds’ portfolios at the end of the third quarter of 2019. There were 15 hedge funds in our database with WSBF positions at the end of the previous quarter.

In the eyes of most traders, hedge funds are viewed as underperforming, outdated financial tools of years past. While there are over 8000 funds trading at present, We choose to focus on the crème de la crème of this club, approximately 750 funds. These investment experts shepherd the majority of the smart money’s total capital, and by shadowing their matchless investments, Insider Monkey has formulated many investment strategies that have historically beaten the market. Insider Monkey’s flagship short hedge fund strategy outstripped the S&P 500 short ETFs by around 20 percentage points annually since its inception in May 2014. Our portfolio of short stocks lost 27.8% since February 2017 (through November 21st) even though the market was up more than 39% during the same period. We just shared a list of 7 short targets in our latest quarterly update .

We leave no stone unturned when looking for the next great investment idea. For example Europe is set to become the world’s largest cannabis market, so we check out this European marijuana stock pitch. One of the most bullish analysts in America just put his money where his mouth is. He says, “I’m investing more today than I did back in early 2009.” So we check out his pitch. We read hedge fund investor letters and listen to stock pitches at hedge fund conferences. We also rely on the best performing hedge funds‘ buy/sell signals. We’re going to analyze the new hedge fund action surrounding Waterstone Financial, Inc. (NASDAQ:WSBF). 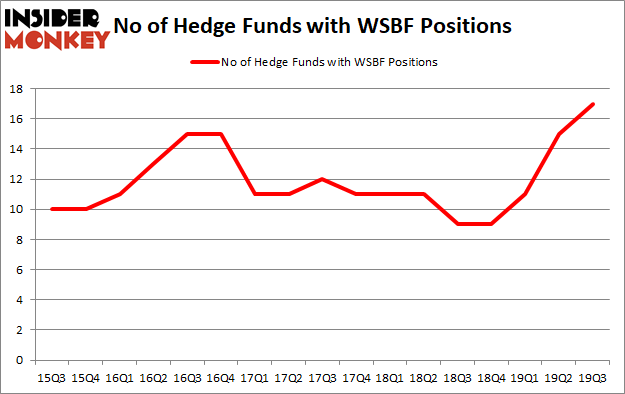 According to Insider Monkey’s hedge fund database, Renaissance Technologies, holds the largest position in Waterstone Financial, Inc. (NASDAQ:WSBF). Renaissance Technologies has a $36.9 million position in the stock, comprising less than 0.1%% of its 13F portfolio. The second most bullish fund manager is MFP Investors, led by Michael Price, holding a $16.7 million position; the fund has 2.3% of its 13F portfolio invested in the stock. Remaining professional money managers that are bullish comprise Alexander Medina Seaver’s Stadium Capital Management, Lawrence Seidman’s Seidman Investment Partnership and Peter Rathjens, Bruce Clarke and John Campbell’s Arrowstreet Capital. In terms of the portfolio weights assigned to each position Seidman Investment Partnership allocated the biggest weight to Waterstone Financial, Inc. (NASDAQ:WSBF), around 4.82% of its 13F portfolio. Stadium Capital Management is also relatively very bullish on the stock, setting aside 4.51 percent of its 13F equity portfolio to WSBF.

With a general bullishness amongst the heavyweights, key hedge funds have jumped into Waterstone Financial, Inc. (NASDAQ:WSBF) headfirst. ExodusPoint Capital, managed by Michael Gelband, initiated the biggest position in Waterstone Financial, Inc. (NASDAQ:WSBF). ExodusPoint Capital had $0.4 million invested in the company at the end of the quarter. Donald Sussman’s Paloma Partners also made a $0.2 million investment in the stock during the quarter. The only other fund with a new position in the stock is Matthew Hulsizer’s PEAK6 Capital Management.

As you can see these stocks had an average of 12.75 hedge funds with bullish positions and the average amount invested in these stocks was $55 million. That figure was $80 million in WSBF’s case. Vectrus Inc (NYSE:VEC) is the most popular stock in this table. On the other hand Hometrust Bancshares Inc (NASDAQ:HTBI) is the least popular one with only 10 bullish hedge fund positions. Compared to these stocks Waterstone Financial, Inc. (NASDAQ:WSBF) is more popular among hedge funds. Our calculations showed that top 20 most popular stocks among hedge funds returned 37.4% in 2019 through the end of November and outperformed the S&P 500 ETF (SPY) by 9.9 percentage points. Hedge funds were also right about betting on WSBF as the stock returned 10.6% during the first two months of Q4 and outperformed the market by an even larger margin. Hedge funds were clearly right about piling into this stock relative to other stocks with similar market capitalizations.