Hedge Funds Have Never Been This Bullish On Vistra Energy Corp. (VST)

Like everyone else, elite investors make mistakes. Some of their top consensus picks, such as Amazon, Facebook and Alibaba, have not done well in Q4 due to various reasons. Nevertheless, the data show elite investors’ consensus picks have done well on average over the long-term. The top 20 stocks among hedge funds beat the S&P 500 Index ETF by more than 6 percentage points so far this year. Because their consensus picks have done well, we pay attention to what elite funds think before doing extensive research on a stock. In this article, we take a closer look at Vistra Energy Corp. (NYSE:VST) from the perspective of those elite funds.

Is Vistra Energy Corp. (NYSE:VST) going to take off soon? Money managers are taking a bullish view. The number of bullish hedge fund bets went up by 4 lately. Our calculations also showed that vst isn’t among the 30 most popular stocks among hedge funds. VST was in 48 hedge funds’ portfolios at the end of March. There were 44 hedge funds in our database with VST positions at the end of the previous quarter.

What does the smart money think about Vistra Energy Corp. (NYSE:VST)?

Heading into the second quarter of 2019, a total of 48 of the hedge funds tracked by Insider Monkey were long this stock, a change of 9% from the previous quarter. The graph below displays the number of hedge funds with bullish position in VST over the last 15 quarters. With hedge funds’ positions undergoing their usual ebb and flow, there exists a few noteworthy hedge fund managers who were adding to their stakes substantially (or already accumulated large positions). 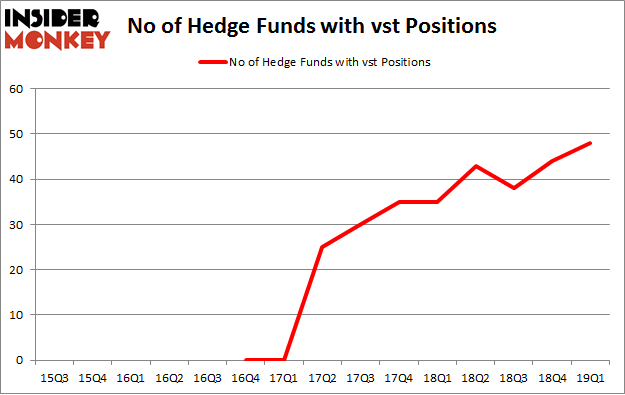 As aggregate interest increased, key money managers have been driving this bullishness. D E Shaw, managed by D. E. Shaw, established the most outsized position in Vistra Energy Corp. (NYSE:VST). D E Shaw had $32.1 million invested in the company at the end of the quarter. Steve Cohen’s Point72 Asset Management also made a $23 million investment in the stock during the quarter. The other funds with new positions in the stock are Charles Davidson and Joseph Jacobs’s Wexford Capital, Andrew Weiss’s Weiss Asset Management, and Mark Travis’s Intrepid Capital Management.