Hedge Funds Have Never Been This Bullish On Veracyte Inc (VCYT)

Is Veracyte Inc (NASDAQ:VCYT) a superb investment right now? Prominent investors are in an optimistic mood. The number of long hedge fund bets increased by 3 recently. Our calculations also showed that VCYT isn’t among the 30 most popular stocks among hedge funds. VCYT was in 17 hedge funds’ portfolios at the end of the fourth quarter of 2018. There were 14 hedge funds in our database with VCYT holdings at the end of the previous quarter.

Heading into the first quarter of 2019, a total of 17 of the hedge funds tracked by Insider Monkey held long positions in this stock, a change of 21% from the previous quarter. By comparison, 12 hedge funds held shares or bullish call options in VCYT a year ago. With the smart money’s sentiment swirling, there exists an “upper tier” of noteworthy hedge fund managers who were upping their stakes significantly (or already accumulated large positions). 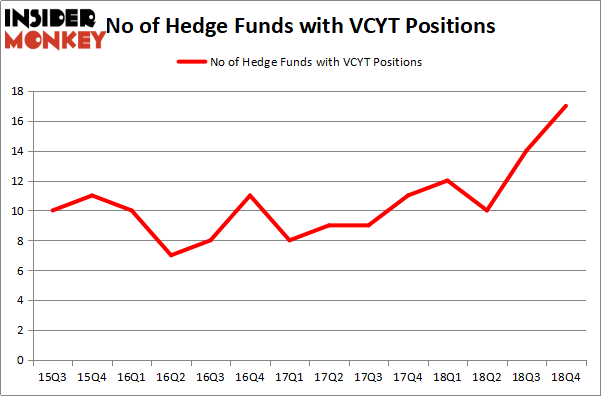 Among these funds, Cannell Capital held the most valuable stake in Veracyte Inc (NASDAQ:VCYT), which was worth $21.3 million at the end of the fourth quarter. On the second spot was Millennium Management which amassed $17.8 million worth of shares. Moreover, Renaissance Technologies, Clough Capital Partners, and Royce & Associates were also bullish on Veracyte Inc (NASDAQ:VCYT), allocating a large percentage of their portfolios to this stock.

As one would reasonably expect, key hedge funds were leading the bulls’ herd. Marshall Wace LLP, managed by Paul Marshall and Ian Wace, initiated the most outsized position in Veracyte Inc (NASDAQ:VCYT). Marshall Wace LLP had $2.9 million invested in the company at the end of the quarter. D. E. Shaw’s D E Shaw also made a $2.2 million investment in the stock during the quarter. The other funds with brand new VCYT positions are Michael Castor’s Sio Capital and Phil Frohlich’s Prescott Group Capital Management.

As you can see these stocks had an average of 6.25 hedge funds with bullish positions and the average amount invested in these stocks was $30 million. That figure was $73 million in VCYT’s case. SI-BONE, Inc. (NASDAQ:SIBN) is the most popular stock in this table. On the other hand Foresight Energy LP (NYSE:FELP) is the least popular one with only 3 bullish hedge fund positions. Compared to these stocks Veracyte Inc (NASDAQ:VCYT) is more popular among hedge funds. Our calculations showed that top 15 most popular stocks) among hedge funds returned 24.2% through April 22nd and outperformed the S&P 500 ETF (SPY) by more than 7 percentage points. Hedge funds were also right about betting on VCYT as the stock returned 83% and outperformed the market by an even larger margin. Hedge funds were clearly right about piling into this stock relative to other stocks with similar market capitalizations.