Most investors tend to think that hedge funds and other asset managers are worthless, as they cannot beat even simple index fund portfolios. In fact, most people expect hedge funds to compete with and outperform the bull market that we have witnessed in recent years. However, hedge funds are generally partially hedged and aim at delivering attractive risk-adjusted returns rather than following the ups and downs of equity markets hoping that they will outperform the broader market. Our research shows that certain hedge funds do have great stock picking skills (and we can identify these hedge funds in advance pretty accurately), so let’s take a glance at the smart money sentiment towards Union Pacific Corporation (NYSE:UNP).

Union Pacific Corporation (NYSE:UNP) investors should pay attention to an increase in hedge fund sentiment lately. UNP was in 64 hedge funds’ portfolios at the end of the second quarter of 2019. There were 54 hedge funds in our database with UNP positions at the end of the previous quarter. Our calculations also showed that UNP isn’t among the 30 most popular stocks among hedge funds (see the video below).

Unlike some fund managers who are betting on Dow reaching 40000 in a year, our long-short investment strategy doesn’t rely on bull markets to deliver double digit returns. We only rely on hedge fund buy/sell signals. Let’s review the new hedge fund action regarding Union Pacific Corporation (NYSE:UNP). 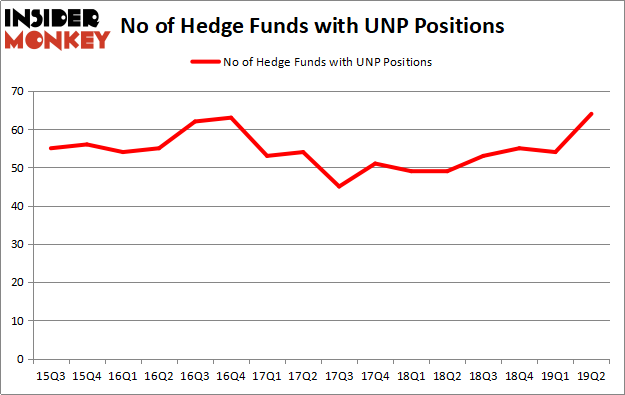 Among these funds, Egerton Capital Limited held the most valuable stake in Union Pacific Corporation (NYSE:UNP), which was worth $1015.9 million at the end of the second quarter. On the second spot was Lone Pine Capital which amassed $833.9 million worth of shares. Moreover, Soroban Capital Partners, Arrowstreet Capital, and D E Shaw were also bullish on Union Pacific Corporation (NYSE:UNP), allocating a large percentage of their portfolios to this stock.

Consequently, key hedge funds have jumped into Union Pacific Corporation (NYSE:UNP) headfirst. Holocene Advisors, managed by Brandon Haley, assembled the most valuable position in Union Pacific Corporation (NYSE:UNP). Holocene Advisors had $129.5 million invested in the company at the end of the quarter. Richard Chilton’s Chilton Investment Company also made a $98.1 million investment in the stock during the quarter. The other funds with new positions in the stock are John Brennan’s Sirios Capital Management, Stuart J. Zimmer’s Zimmer Partners, and Guy Shahar’s DSAM Partners.

As you can see these stocks had an average of 54.75 hedge funds with bullish positions and the average amount invested in these stocks was $3033 million. That figure was $5598 million in UNP’s case. salesforce.com, inc. (NYSE:CRM) is the most popular stock in this table. On the other hand HDFC Bank Limited (NYSE:HDB) is the least popular one with only 27 bullish hedge fund positions. Union Pacific Corporation (NYSE:UNP) is not the most popular stock in this group but hedge fund interest is still above average. This is a slightly positive signal but we’d rather spend our time researching stocks that hedge funds are piling on. Our calculations showed that top 20 most popular stocks among hedge funds returned 24.4% in 2019 through September 30th and outperformed the S&P 500 ETF (SPY) by 4 percentage points. Unfortunately UNP wasn’t nearly as popular as these 20 stocks and hedge funds that were betting on UNP were disappointed as the stock returned -3.6% during the third quarter and underperformed the market. If you are interested in investing in large cap stocks with huge upside potential, you should check out the top 20 most popular stocks among hedge funds as many of these stocks already outperformed the market so far this year.