Hedge Funds Have Never Been This Bullish On UniFirst Corporation (UNF) 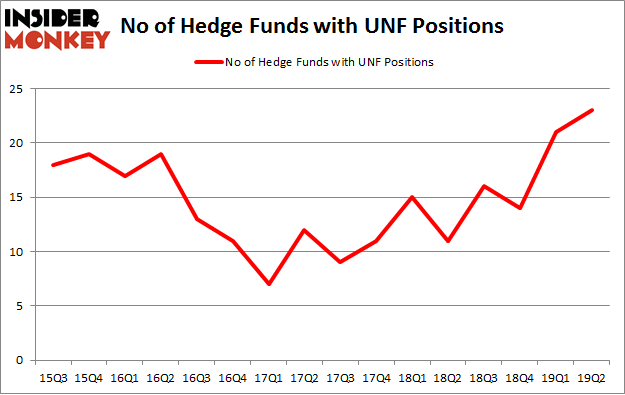 Among these funds, GLG Partners held the most valuable stake in UniFirst Corporation (NYSE:UNF), which was worth $37.2 million at the end of the second quarter. On the second spot was Echo Street Capital Management which amassed $28.3 million worth of shares. Moreover, Royce & Associates, Carlson Capital, and Millennium Management were also bullish on UniFirst Corporation (NYSE:UNF), allocating a large percentage of their portfolios to this stock.

Let’s check out hedge fund activity in other stocks – not necessarily in the same industry as UniFirst Corporation (NYSE:UNF) but similarly valued. We will take a look at Valley National Bancorp (NASDAQ:VLY), Telephone and Data Systems, Inc. (NYSE:TDS), DNP Select Income Fund Inc. (NYSE:DNP), and KBR, Inc. (NYSE:KBR). This group of stocks’ market values are closest to UNF’s market value.

As you can see these stocks had an average of 14.75 hedge funds with bullish positions and the average amount invested in these stocks was $251 million. That figure was $183 million in UNF’s case. Telephone and Data Systems, Inc. (NYSE:TDS) is the most popular stock in this table. On the other hand DNP Select Income Fund Inc. (NYSE:DNP) is the least popular one with only 1 bullish hedge fund positions. UniFirst Corporation (NYSE:UNF) is not the most popular stock in this group but hedge fund interest is still above average. Our calculations showed that top 20 most popular stocks among hedge funds returned 24.4% in 2019 through September 30th and outperformed the S&P 500 ETF (SPY) by 4 percentage points. Hedge funds were also right about betting on UNF, though not to the same extent, as the stock returned 3.5% during the third quarter and outperformed the market as well.