Hedge Funds Have Never Been This Bullish On Tuscan Holdings Corp. (THCB)

Tuscan Holdings Corp. (NASDAQ:THCB) investors should be aware of an increase in activity from the world’s largest hedge funds in recent months. Our calculations also showed that THCB isn’t among the 30 most popular stocks among hedge funds (see the video below).

Unlike other investors who track every movement of the 25 largest hedge funds, our long-short investment strategy relies on hedge fund buy/sell signals given by the 100 best performing hedge funds. We’re going to check out the new hedge fund action surrounding Tuscan Holdings Corp. (NASDAQ:THCB).

What have hedge funds been doing with Tuscan Holdings Corp. (NASDAQ:THCB)?

At the end of the second quarter, a total of 12 of the hedge funds tracked by Insider Monkey held long positions in this stock, a change of 50% from one quarter earlier. Below, you can check out the change in hedge fund sentiment towards THCB over the last 16 quarters. With hedge funds’ positions undergoing their usual ebb and flow, there exists an “upper tier” of key hedge fund managers who were boosting their holdings substantially (or already accumulated large positions). 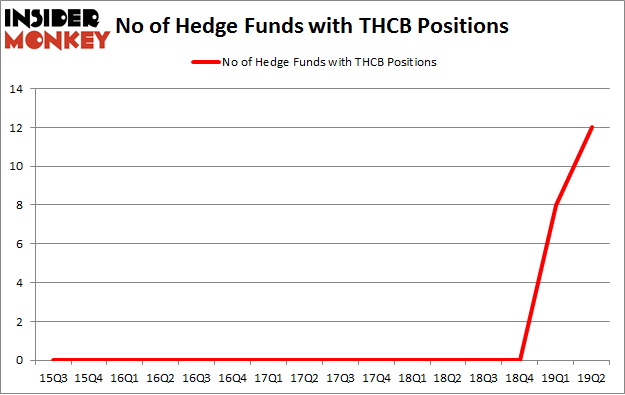 According to Insider Monkey’s hedge fund database, Noah Levy and Eugene Dozortsev’s Newtyn Management has the most valuable position in Tuscan Holdings Corp. (NASDAQ:THCB), worth close to $9.2 million, comprising 1.2% of its total 13F portfolio. The second most bullish fund manager is BlueCrest Capital Mgmt., led by Michael Platt and William Reeves, holding a $8.1 million position; the fund has 0.6% of its 13F portfolio invested in the stock. Some other hedge funds and institutional investors that hold long positions contain Israel Englander’s Millennium Management, Sander Gerber’s Hudson Bay Capital Management and John Thiessen’s Vertex One Asset Management.

As one would reasonably expect, key hedge funds have been driving this bullishness. Newtyn Management, managed by Noah Levy and Eugene Dozortsev, created the most valuable position in Tuscan Holdings Corp. (NASDAQ:THCB). Newtyn Management had $9.2 million invested in the company at the end of the quarter. Israel Englander’s Millennium Management also initiated a $8 million position during the quarter. The other funds with new positions in the stock are Andrew Weiss’s Weiss Asset Management, Curtis Schenker and Craig Effron’s Scoggin, and Phillip Goldstein, Andrew Dakos and Steven Samuels’s Bulldog Investors.

As you can see these stocks had an average of 10 hedge funds with bullish positions and the average amount invested in these stocks was $39 million. That figure was $58 million in THCB’s case. J.C. Penney Company, Inc. (NYSE:JCP) is the most popular stock in this table. On the other hand HighPoint Resources Corporation (NYSE:HPR) is the least popular one with only 8 bullish hedge fund positions. Tuscan Holdings Corp. (NASDAQ:THCB) is not the most popular stock in this group but hedge fund interest is still above average. This is a slightly positive signal but we’d rather spend our time researching stocks that hedge funds are piling on. Our calculations showed that top 20 most popular stocks among hedge funds returned 24.4% in 2019 through September 30th and outperformed the S&P 500 ETF (SPY) by 4 percentage points. Unfortunately THCB wasn’t nearly as popular as these 20 stocks and hedge funds that were betting on THCB were disappointed as the stock returned -0.8% during the third quarter and underperformed the market. If you are interested in investing in large cap stocks with huge upside potential, you should check out the top 20 most popular stocks among hedge funds as many of these stocks already outperformed the market so far this year.

Is Republic First Bancorp, Inc. (FRBK) A Good Stock To Buy
Monthly Newsletter Strategy
Download a free copy of our newsletter and see the details inside!
Hedge Fund Resource Center
Related News
11 Largest Auto Insurance Companies In The US In 2019 10 Poorest Cities in America in 2019 8 Lowest Tar and Nicotine Cigarette Brands in 2019
Billionaire Hedge Funds