Hedge Funds Have Never Been This Bullish On TransAlta Corporation (TAC)

Russell 2000 ETF (IWM) lagged the larger S&P 500 ETF (SPY) by nearly 9 percentage points since the end of the third quarter of 2018 as investors worried over the possible ramifications of rising interest rates and escalation of the trade war with China. The hedge funds and institutional investors we track typically invest more in smaller-cap stocks than an average investor (i.e. only 298 S&P 500 constituents were among the 500 most popular stocks among hedge funds), and we have seen data that shows those funds paring back their overall exposure. Those funds cutting positions in small-caps is one reason why volatility has increased. In the following paragraphs, we take a closer look at what hedge funds and prominent investors think of TransAlta Corporation (NYSE:TAC) and see how the stock is affected by the recent hedge fund activity.

TransAlta Corporation (NYSE:TAC) was in 11 hedge funds’ portfolios at the end of the first quarter of 2019. TAC shareholders have witnessed an increase in activity from the world’s largest hedge funds of late. There were 9 hedge funds in our database with TAC holdings at the end of the previous quarter. Our calculations also showed that tac isn’t among the 30 most popular stocks among hedge funds.

In the 21st century investor’s toolkit there are a multitude of indicators market participants use to evaluate their stock investments. A pair of the best indicators are hedge fund and insider trading moves. We have shown that, historically, those who follow the top picks of the elite investment managers can outperform the S&P 500 by a superb margin (see the details here). 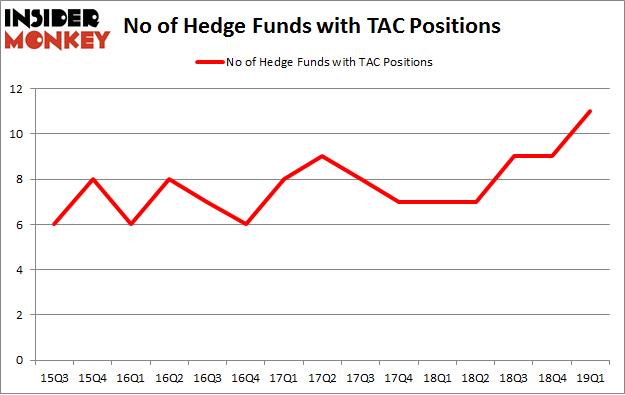 According to Insider Monkey’s hedge fund database, Peter Rathjens, Bruce Clarke and John Campbell’s Arrowstreet Capital has the biggest position in TransAlta Corporation (NYSE:TAC), worth close to $13.1 million, corresponding to less than 0.1%% of its total 13F portfolio. Coming in second is Renaissance Technologies, managed by Jim Simons, which holds a $6.5 million position; the fund has less than 0.1%% of its 13F portfolio invested in the stock. Other members of the smart money that are bullish comprise Andrew Weiss’s Weiss Asset Management, Brad Dunkley and Blair Levinsky’s Waratah Capital Advisors and John Overdeck and David Siegel’s Two Sigma Advisors.

With a general bullishness amongst the heavyweights, key money managers were breaking ground themselves. Weiss Asset Management, managed by Andrew Weiss, created the biggest position in TransAlta Corporation (NYSE:TAC). Weiss Asset Management had $2.2 million invested in the company at the end of the quarter. Brad Dunkley and Blair Levinsky’s Waratah Capital Advisors also initiated a $1.5 million position during the quarter. The other funds with new positions in the stock are Jerome L. Simon’s Lonestar Capital Management and Ronald Hua’s Qtron Investments.

As you can see these stocks had an average of 15 hedge funds with bullish positions and the average amount invested in these stocks was $180 million. That figure was $29 million in TAC’s case. Regenxbio Inc (NASDAQ:RGNX) is the most popular stock in this table. On the other hand Brooks Automation, Inc. (NASDAQ:BRKS) is the least popular one with only 9 bullish hedge fund positions. TransAlta Corporation (NYSE:TAC) is not the least popular stock in this group but hedge fund interest is still below average. This is a slightly negative signal and we’d rather spend our time researching stocks that hedge funds are piling on. Our calculations showed that top 20 most popular stocks among hedge funds returned 6.2% in Q2 through June 19th and outperformed the S&P 500 ETF (SPY) by nearly 3 percentage points. Unfortunately TAC wasn’t nearly as popular as these 20 stocks (hedge fund sentiment was quite bearish); TAC investors were disappointed as the stock returned -12.9% during the same time period and underperformed the market. If you are interested in investing in large cap stocks with huge upside potential, you should check out the top 20 most popular stocks among hedge funds as 13 of these stocks already outperformed the market so far in Q2.