The latest 13F reporting period has come and gone, and Insider Monkey is again at the forefront when it comes to making use of this gold mine of data. We have processed the filings of the more than 700 world-class investment firms that we track and now have access to the collective wisdom contained in these filings, which are based on their December 31 holdings, data that is available nowhere else. Should you consider Third Point Reinsurance Ltd (NYSE:TPRE) for your portfolio? We’ll look to this invaluable collective wisdom for the answer.

Is Third Point Reinsurance Ltd (NYSE:TPRE) a sound investment now? The best stock pickers are taking an optimistic view. The number of bullish hedge fund bets inched up by 4 recently. Our calculations also showed that tpre isn’t among the 30 most popular stocks among hedge funds. TPRE was in 18 hedge funds’ portfolios at the end of the fourth quarter of 2018. There were 14 hedge funds in our database with TPRE positions at the end of the previous quarter. 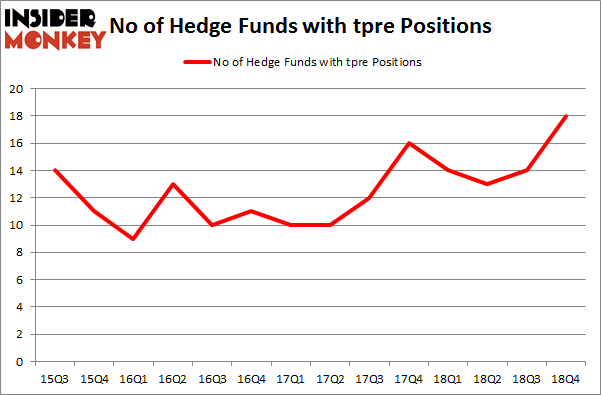 Of the funds tracked by Insider Monkey, Noam Gottesman’s GLG Partners has the most valuable position in Third Point Reinsurance Ltd (NYSE:TPRE), worth close to $19.4 million, corresponding to 0.1% of its total 13F portfolio. Coming in second is AQR Capital Management, managed by Cliff Asness, which holds a $8.9 million position; the fund has less than 0.1%% of its 13F portfolio invested in the stock. Some other hedge funds and institutional investors that hold long positions comprise Parvinder Thiara’s Athanor Capital, Jim Simons’s Renaissance Technologies and Ron Mass’s Almitas Capital.