Before we spend countless hours researching a company, we like to analyze what insiders, hedge funds and billionaire investors think of the stock first. This is a necessary first step in our investment process because our research has shown that the elite investors’ consensus returns have been exceptional. In the following paragraphs, we find out what the billionaire investors and hedge funds think of The Sherwin-Williams Company (NYSE:SHW).

Is The Sherwin-Williams Company (NYSE:SHW) a first-rate stock to buy now? Money managers are becoming more confident. The number of long hedge fund bets advanced by 2 lately. Our calculations also showed that SHW isn’t among the 30 most popular stocks among hedge funds (click for Q1 rankings and see the video for a quick look at the top 5 stocks). SHW was in 57 hedge funds’ portfolios at the end of March. There were 55 hedge funds in our database with SHW positions at the end of the previous quarter.

Today there are tons of formulas investors employ to analyze publicly traded companies. A couple of the most underrated formulas are hedge fund and insider trading sentiment. Our researchers have shown that, historically, those who follow the best picks of the top investment managers can outpace the broader indices by a superb margin (see the details here).

At Insider Monkey we leave no stone unturned when looking for the next great investment idea.  For example, we are still not out of the woods in terms of the coronavirus pandemic. So, we checked out this analyst’s “corona catalyst plays“. We interview hedge fund managers and ask them about best ideas. You can watch our latest hedge fund manager interview here and find out the name of the large-cap healthcare stock that Sio Capital’s Michael Castor expects to double. We read hedge fund investor letters and listen to stock pitches at hedge fund conferences. Our best call in 2020 was shorting the market when S&P 500 was trading at 3150 after realizing the coronavirus pandemic’s significance before most investors. With all of this in mind let’s check out the latest hedge fund action encompassing The Sherwin-Williams Company (NYSE:SHW).

What does smart money think about The Sherwin-Williams Company (NYSE:SHW)? 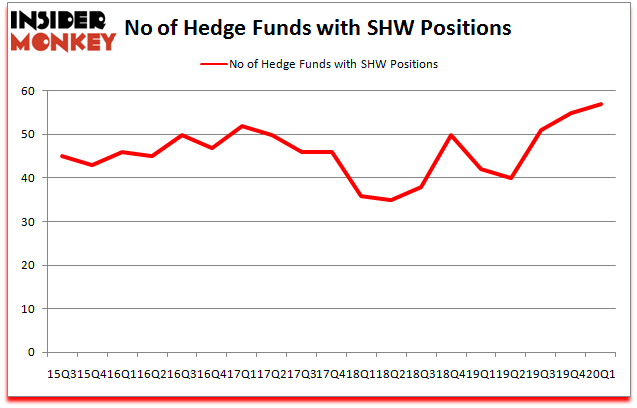 Among these funds, Farallon Capital held the most valuable stake in The Sherwin-Williams Company (NYSE:SHW), which was worth $234 million at the end of the third quarter. On the second spot was Chilton Investment Company which amassed $195.3 million worth of shares. Adage Capital Management, Diamond Hill Capital, and Two Sigma Advisors were also very fond of the stock, becoming one of the largest hedge fund holders of the company. In terms of the portfolio weights assigned to each position Chilton Investment Company allocated the biggest weight to The Sherwin-Williams Company (NYSE:SHW), around 7.4% of its 13F portfolio. Sandbar Asset Management is also relatively very bullish on the stock, earmarking 5.26 percent of its 13F equity portfolio to SHW.

As industrywide interest jumped, specific money managers have jumped into The Sherwin-Williams Company (NYSE:SHW) headfirst. Third Point, managed by Dan Loeb, assembled the largest position in The Sherwin-Williams Company (NYSE:SHW). Third Point had $68.9 million invested in the company at the end of the quarter. Ken Griffin’s Citadel Investment Group also made a $42.1 million investment in the stock during the quarter. The other funds with brand new SHW positions are Brandon Haley’s Holocene Advisors, Robert Joseph Caruso’s Select Equity Group, and Jack Woodruff’s Candlestick Capital Management.

As you can see these stocks had an average of 44.5 hedge funds with bullish positions and the average amount invested in these stocks was $2105 million. That figure was $1511 million in SHW’s case. Humana Inc (NYSE:HUM) is the most popular stock in this table. On the other hand TC Energy Corporation (NYSE:TRP) is the least popular one with only 24 bullish hedge fund positions. The Sherwin-Williams Company (NYSE:SHW) is not the most popular stock in this group but hedge fund interest is still above average. Our calculations showed that top 10 most popular stocks among hedge funds returned 41.4% in 2019 and outperformed the S&P 500 ETF (SPY) by 10.1 percentage points. These stocks gained 7.9% in 2020 through May 22nd but still beat the market by 15.6 percentage points. Hedge funds were also right about betting on SHW as the stock returned 25.9% in Q2 (through May 22nd) and outperformed the market. Hedge funds were rewarded for their relative bullishness.