Hedge Funds and other institutional investors have just completed filing their 13Fs with the Securities and Exchange Commission, revealing their equity portfolios as of the end of June. At Insider Monkey, we follow nearly 750 active hedge funds and notable investors and by analyzing their 13F filings, we can determine the stocks that they are collectively bullish on. One of their picks is The Middleby Corporation (NASDAQ:MIDD), so let’s take a closer look at the sentiment that surrounds it in the current quarter.

Is The Middleby Corporation (NASDAQ:MIDD) worth your attention right now? Investors who are in the know are taking a bullish view. The number of long hedge fund bets inched up by 7 recently. Our calculations also showed that MIDD isn’t among the 30 most popular stocks among hedge funds (see the video below). 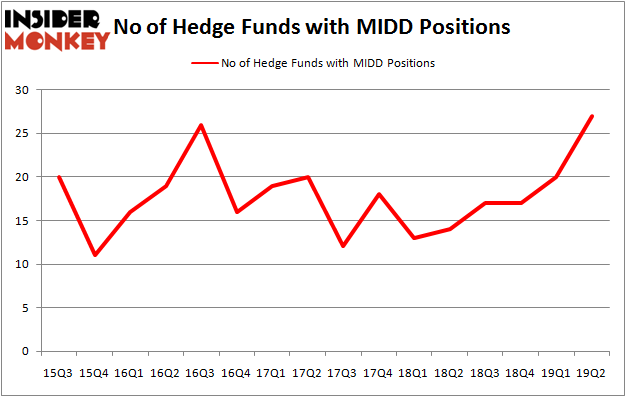 Unlike this former hedge fund manager who is convinced Dow will soar past 40000, our long-short investment strategy doesn’t rely on bull markets to deliver double digit returns. We only rely on hedge fund buy/sell signals. We’re going to take a peek at the new hedge fund action regarding The Middleby Corporation (NASDAQ:MIDD).

When looking at the institutional investors followed by Insider Monkey, Eminence Capital, managed by Ricky Sandler, holds the most valuable position in The Middleby Corporation (NASDAQ:MIDD). Eminence Capital has a $172.9 million position in the stock, comprising 2.3% of its 13F portfolio. Sitting at the No. 2 spot is Brian Bares of Bares Capital Management, with a $56.9 million position; the fund has 1.6% of its 13F portfolio invested in the stock. Remaining members of the smart money that are bullish encompass D. E. Shaw’s D E Shaw, Greg Poole’s Echo Street Capital Management and Israel Englander’s Millennium Management.

As industrywide interest jumped, some big names have jumped into The Middleby Corporation (NASDAQ:MIDD) headfirst. Renaissance Technologies, assembled the most outsized position in The Middleby Corporation (NASDAQ:MIDD). Renaissance Technologies had $27.3 million invested in the company at the end of the quarter. Peter Rathjens, Bruce Clarke and John Campbell’s Arrowstreet Capital also initiated a $3.8 million position during the quarter. The other funds with brand new MIDD positions are Paul Tudor Jones’s Tudor Investment Corp, Dmitry Balyasny’s Balyasny Asset Management, and Benjamin A. Smith’s Laurion Capital Management.

As you can see these stocks had an average of 20 hedge funds with bullish positions and the average amount invested in these stocks was $886 million. That figure was $554 million in MIDD’s case. Apartment Investment and Management Co. (NYSE:AIV) is the most popular stock in this table. On the other hand BeiGene, Ltd. (NASDAQ:BGNE) is the least popular one with only 12 bullish hedge fund positions. Compared to these stocks The Middleby Corporation (NASDAQ:MIDD) is more popular among hedge funds. Our calculations showed that top 20 most popular stocks among hedge funds returned 24.4% in 2019 through September 30th and outperformed the S&P 500 ETF (SPY) by 4 percentage points. Unfortunately MIDD wasn’t nearly as popular as these 20 stocks and hedge funds that were betting on MIDD were disappointed as the stock returned -13.9% during the third quarter and underperformed the market. If you are interested in investing in large cap stocks with huge upside potential, you should check out the top 20 most popular stocks among hedge funds as many of these stocks already outperformed the market in Q3.