We are still in an overall bull market and many stocks that smart money investors were piling into surged through October 17th. Among them, Facebook and Microsoft ranked among the top 3 picks and these stocks gained 45% and 39% respectively. Hedge funds’ top 3 stock picks returned 34.4% this year and beat the S&P 500 ETFs by 13 percentage points. Investing in index funds guarantees you average returns, not superior returns. We are looking to generate superior returns for our readers. That’s why we believe it isn’t a waste of time to check out hedge fund sentiment before you invest in a stock like The Medicines Company (NASDAQ:MDCO).

Is The Medicines Company (NASDAQ:MDCO) ready to rally soon? The best stock pickers are turning bullish. The number of long hedge fund bets inched up by 8 in recent months. Our calculations also showed that MDCO isn’t among the 30 most popular stocks among hedge funds (view the video below). MDCO was in 33 hedge funds’ portfolios at the end of the second quarter of 2019. There were 25 hedge funds in our database with MDCO holdings at the end of the previous quarter.

What does smart money think about The Medicines Company (NASDAQ:MDCO)?

At Q2’s end, a total of 33 of the hedge funds tracked by Insider Monkey were long this stock, a change of 32% from the previous quarter. On the other hand, there were a total of 28 hedge funds with a bullish position in MDCO a year ago. With hedgies’ sentiment swirling, there exists a few notable hedge fund managers who were increasing their holdings significantly (or already accumulated large positions). 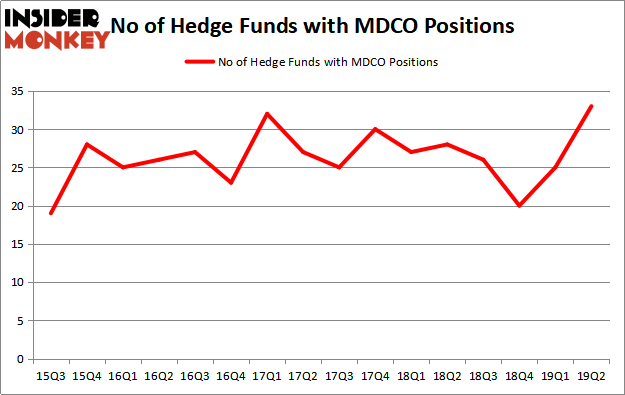 With a general bullishness amongst the heavyweights, specific money managers have jumped into The Medicines Company (NASDAQ:MDCO) headfirst. Iridian Asset Management, managed by David Cohen and Harold Levy, created the largest position in The Medicines Company (NASDAQ:MDCO). Iridian Asset Management had $126 million invested in the company at the end of the quarter. Albert Cha and Frank Kung’s Vivo Capital also initiated a $24.4 million position during the quarter. The following funds were also among the new MDCO investors: Renaissance Technologies, Samuel Isaly’s OrbiMed Advisors, and Dmitry Balyasny’s Balyasny Asset Management.

As you can see these stocks had an average of 10.75 hedge funds with bullish positions and the average amount invested in these stocks was $250 million. That figure was $921 million in MDCO’s case. Kennametal Inc. (NYSE:KMT) is the most popular stock in this table. On the other hand NuStar Energy L.P. (NYSE:NS) is the least popular one with only 2 bullish hedge fund positions. Compared to these stocks The Medicines Company (NASDAQ:MDCO) is more popular among hedge funds. Our calculations showed that top 20 most popular stocks among hedge funds returned 24.4% in 2019 through September 30th and outperformed the S&P 500 ETF (SPY) by 4 percentage points. Hedge funds were also right about betting on MDCO as the stock returned 37.1% during Q3 and outperformed the market by an even larger margin. Hedge funds were clearly right about piling into this stock relative to other stocks with similar market capitalizations.