Before we spend days researching a stock idea we like to take a look at how hedge funds and billionaire investors recently traded that stock. Russell 2000 ETF (IWM) lagged the larger S&P 500 ETF (SPY) by more than 10 percentage points since the end of the third quarter of 2018. This means hedge funds that are allocating a higher percentage of their portfolio to small-cap stocks were probably underperforming the market. However, this also means that as small-cap stocks start to mean revert, these hedge funds will start delivering better returns than the S&P 500 Index funds. In this article, we will take a look at what hedge funds think about The Joint Corp. (NASDAQ:JYNT).

The Joint Corp. (NASDAQ:JYNT) has experienced an increase in hedge fund sentiment recently. JYNT was in 10 hedge funds’ portfolios at the end of June. There were 9 hedge funds in our database with JYNT positions at the end of the previous quarter. Our calculations also showed that JYNT isn’t among the 30 most popular stocks among hedge funds (see the video below).

In the eyes of most shareholders, hedge funds are seen as underperforming, outdated investment vehicles of yesteryear. While there are more than 8000 funds with their doors open at present, We choose to focus on the leaders of this club, approximately 750 funds. Most estimates calculate that this group of people handle bulk of all hedge funds’ total asset base, and by tracking their highest performing picks, Insider Monkey has come up with a number of investment strategies that have historically outstripped Mr. Market. Insider Monkey’s flagship hedge fund strategy outperformed the S&P 500 index by around 5 percentage points per year since its inception in May 2014. We were able to generate large returns even by identifying short candidates. Our portfolio of short stocks lost 25.7% since February 2017 (through September 30th) even though the market was up more than 33% during the same period. We just shared a list of 10 short targets in our latest quarterly update .

In addition to following the biggest hedge funds for investment ideas, we also share stock pitches from conferences, investor letters and other sources  like this one where the fund manager is talking about two under the radar 1000% return potential stocks: first one in internet infrastructure and the second in the heart of advertising market. We use hedge fund buy/sell signals to determine whether to conduct in-depth analysis of these stock ideas which take days. Let’s view the key hedge fund action surrounding The Joint Corp. (NASDAQ:JYNT). 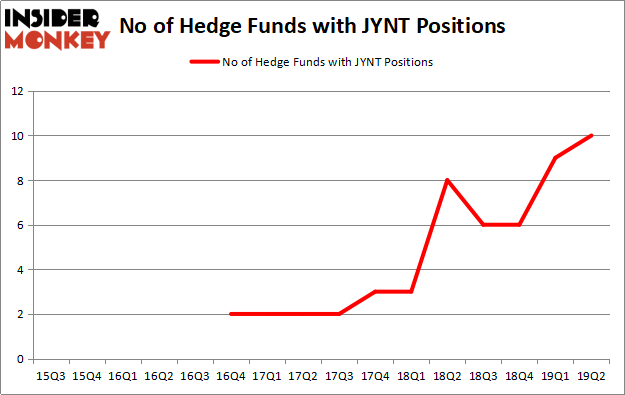 According to publicly available hedge fund and institutional investor holdings data compiled by Insider Monkey, Gregory Bylinsky and Jefferson Gramm’s Bandera Partners has the number one position in The Joint Corp. (NASDAQ:JYNT), worth close to $24.8 million, accounting for 14.7% of its total 13F portfolio. Sitting at the No. 2 spot is Wilmot B. Harkey and Daniel Mack of Nantahala Capital Management, with a $16.1 million position; the fund has 0.5% of its 13F portfolio invested in the stock. Other professional money managers that are bullish encompass Charles Paquelet’s Skylands Capital, Israel Englander’s Millennium Management and Chuck Royce’s Royce & Associates.

Now, key hedge funds were breaking ground themselves. Royce & Associates, managed by Chuck Royce, assembled the biggest position in The Joint Corp. (NASDAQ:JYNT). Royce & Associates had $2.5 million invested in the company at the end of the quarter. Josh Goldberg’s G2 Investment Partners Management also made a $1.6 million investment in the stock during the quarter. The following funds were also among the new JYNT investors: John Overdeck and David Siegel’s Two Sigma Advisors and Ken Griffin’s Citadel Investment Group.

As you can see these stocks had an average of 4.75 hedge funds with bullish positions and the average amount invested in these stocks was $20 million. That figure was $62 million in JYNT’s case. U.S. Xpress Enterprises, Inc. (NYSE:USX) is the most popular stock in this table. On the other hand Solar Senior Capital Ltd (NASDAQ:SUNS) is the least popular one with only 1 bullish hedge fund positions. Compared to these stocks The Joint Corp. (NASDAQ:JYNT) is more popular among hedge funds. Our calculations showed that top 20 most popular stocks among hedge funds returned 24.4% in 2019 through September 30th and outperformed the S&P 500 ETF (SPY) by 4 percentage points. Hedge funds were also right about betting on JYNT, though not to the same extent, as the stock returned 2.3% during the third quarter and outperformed the market as well.