Our extensive research has shown that imitating the smart money can generate significant returns for retail investors, which is why we track nearly 750 active prominent money managers and analyze their quarterly 13F filings. The stocks that are heavily bought by hedge funds historically outperformed the market, though there is no shortage of high profile failures like hedge funds’ 2018 losses in Facebook and Apple. Let’s take a closer look at what the funds we track think about The Estee Lauder Companies Inc (NYSE:EL) in this article.

Is The Estee Lauder Companies Inc (NYSE:EL) a bargain? Prominent investors are taking an optimistic view. The number of long hedge fund positions inched up by 7 in recent months. Our calculations also showed that EL isn’t among the 30 most popular stocks among hedge funds. EL was in 43 hedge funds’ portfolios at the end of the third quarter of 2019. There were 36 hedge funds in our database with EL positions at the end of the previous quarter.

Unlike the largest US hedge funds that are convinced Dow will soar past 40,000 or the world’s most bearish hedge fund that’s more convinced than ever that a crash is coming, our long-short investment strategy doesn’t rely on bull or bear markets to deliver double digit returns. We only rely on the best performing hedge funds‘ buy/sell signals. We’re going to analyze the fresh hedge fund action surrounding The Estee Lauder Companies Inc (NYSE:EL).

How have hedgies been trading The Estee Lauder Companies Inc (NYSE:EL)? 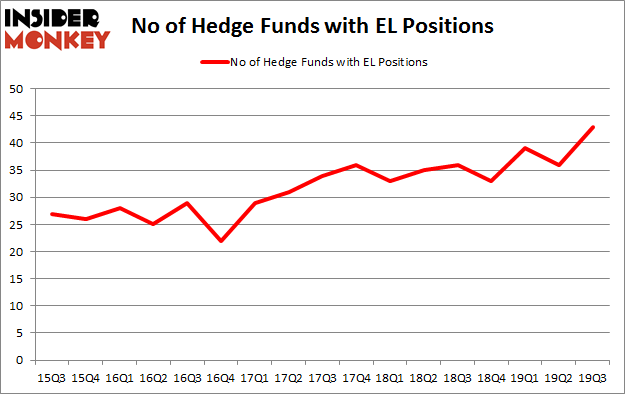 More specifically, Renaissance Technologies was the largest shareholder of The Estee Lauder Companies Inc (NYSE:EL), with a stake worth $555.5 million reported as of the end of September. Trailing Renaissance Technologies was AQR Capital Management, which amassed a stake valued at $381.7 million. Arrowstreet Capital, Melvin Capital Management, and Point72 Asset Management were also very fond of the stock, becoming one of the largest hedge fund holders of the company. In terms of the portfolio weights assigned to each position Tairen Capital allocated the biggest weight to The Estee Lauder Companies Inc (NYSE:EL), around 5.42% of its portfolio. Bristol Gate Capital Partners is also relatively very bullish on the stock, setting aside 4.38 percent of its 13F equity portfolio to EL.

As aggregate interest increased, key money managers have been driving this bullishness. Millennium Management, managed by Israel Englander, established the most valuable position in The Estee Lauder Companies Inc (NYSE:EL). Millennium Management had $76.7 million invested in the company at the end of the quarter. Larry Chen and Terry Zhang’s Tairen Capital also made a $36.8 million investment in the stock during the quarter. The other funds with brand new EL positions are Jeffrey Talpins’s Element Capital Management, Matthew Tewksbury’s Stevens Capital Management, and Paul Tudor Jones’s Tudor Investment Corp.

As you can see these stocks had an average of 32.25 hedge funds with bullish positions and the average amount invested in these stocks was $1904 million. That figure was $1851 million in EL’s case. Morgan Stanley (NYSE:MS) is the most popular stock in this table. On the other hand China Petroleum & Chemical Corporation (NYSE:SNP) is the least popular one with only 13 bullish hedge fund positions. The Estee Lauder Companies Inc (NYSE:EL) is not the most popular stock in this group but hedge fund interest is still above average. This is a slightly positive signal but we’d rather spend our time researching stocks that hedge funds are piling on. Our calculations showed that top 20 most popular stocks among hedge funds returned 34.7% in 2019 through November 22nd and outperformed the S&P 500 ETF (SPY) by 8.5 percentage points. Unfortunately EL wasn’t nearly as popular as these 20 stocks and hedge funds that were betting on EL were disappointed as the stock returned -2.9% during the fourth quarter (through 11/22) and underperformed the market. If you are interested in investing in large cap stocks with huge upside potential, you should check out the top 20 most popular stocks among hedge funds as many of these stocks already outperformed the market so far this year.