Most investors tend to think that hedge funds and other asset managers are worthless, as they cannot beat even simple index fund portfolios. In fact, most people expect hedge funds to compete with and outperform the bull market that we have witnessed in recent years. However, hedge funds are generally partially hedged and aim at delivering attractive risk-adjusted returns rather than following the ups and downs of equity markets hoping that they will outperform the broader market. Our research shows that certain hedge funds do have great stock picking skills (and we can identify these hedge funds in advance pretty accurately), so let’s take a glance at the smart money sentiment towards The Boeing Company (NYSE:BA).

The Boeing Company (NYSE:BA) has seen an increase in hedge fund interest recently. BA was in 78 hedge funds’ portfolios at the end of the third quarter of 2019. There were 74 hedge funds in our database with BA positions at the end of the previous quarter. Our calculations also showed that BA now ranks 25th overall among the 30 most popular stocks among hedge funds (see the video below).

According to most market participants, hedge funds are seen as worthless, old investment tools of years past. While there are greater than 8000 funds with their doors open at present, Our experts hone in on the moguls of this group, about 750 funds. Most estimates calculate that this group of people control the lion’s share of the hedge fund industry’s total asset base, and by shadowing their unrivaled picks, Insider Monkey has unearthed a few investment strategies that have historically beaten Mr. Market. Insider Monkey’s flagship short hedge fund strategy outperformed the S&P 500 short ETFs by around 20 percentage points per year since its inception in May 2014. Our portfolio of short stocks lost 27.8% since February 2017 (through November 21st) even though the market was up more than 39% during the same period. We just shared a list of 7 short targets in our latest quarterly update .

What does smart money think about The Boeing Company (NYSE:BA)? 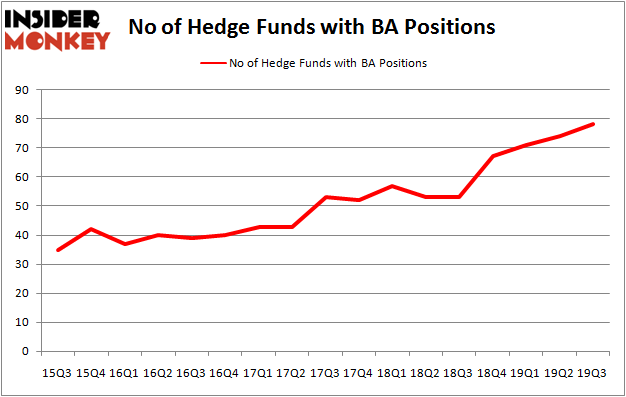 Among these funds, Viking Global held the most valuable stake in The Boeing Company (NYSE:BA), which was worth $854.8 million at the end of the third quarter. On the second spot was Adage Capital Management which amassed $262.8 million worth of shares. Steadfast Capital Management, Alkeon Capital Management, and D E Shaw were also very fond of the stock, becoming one of the largest hedge fund holders of the company. In terms of the portfolio weights assigned to each position Theleme Partners allocated the biggest weight to The Boeing Company (NYSE:BA), around 6.28% of its portfolio. Incline Global Management is also relatively very bullish on the stock, setting aside 5.84 percent of its 13F equity portfolio to BA.

Consequently, key money managers have jumped into The Boeing Company (NYSE:BA) headfirst. Palestra Capital Management, managed by Andrew Immerman and Jeremy Schiffman, initiated the most valuable call position in The Boeing Company (NYSE:BA). Palestra Capital Management had $140.8 million invested in the company at the end of the quarter. Zach Schreiber’s Point State Capital also made a $42 million investment in the stock during the quarter. The other funds with new positions in the stock are Richard Gerson and Navroz D. Udwadia’s Falcon Edge Capital, Israel Englander’s Millennium Management, and Jeff Lignelli’s Incline Global Management.

Let’s go over hedge fund activity in other stocks – not necessarily in the same industry as The Boeing Company (NYSE:BA) but similarly valued. We will take a look at Cisco Systems, Inc. (NASDAQ:CSCO), UnitedHealth Group Inc. (NYSE:UNH), Comcast Corporation (NASDAQ:CMCSA), and Novartis AG (NYSE:NVS). This group of stocks’ market valuations are closest to BA’s market valuation.

As you can see these stocks had an average of 61.25 hedge funds with bullish positions and the average amount invested in these stocks was $4464 million. That figure was $3965 million in BA’s case. Comcast Corporation (NASDAQ:CMCSA) is the most popular stock in this table. On the other hand Novartis AG (NYSE:NVS) is the least popular one with only 28 bullish hedge fund positions. The Boeing Company (NYSE:BA) is not the most popular stock in this group but hedge fund interest is still above average. This is a slightly positive signal but we’d rather spend our time researching stocks that hedge funds are piling on. Our calculations showed that top 20 most popular stocks among hedge funds returned 34.7% in 2019 through November 22nd and outperformed the S&P 500 ETF (SPY) by 8.5 percentage points. Unfortunately BA wasn’t nearly as popular as these 20 stocks and hedge funds that were betting on BA were disappointed as the stock returned -1.8% during the fourth quarter (through 11/22) and underperformed the market. If you are interested in investing in large cap stocks with huge upside potential, you should check out the top 20 most popular stocks among hedge funds as many of these stocks already outperformed the market so far this year.