Investing in small cap stocks has historically been a way to outperform the market, as small cap companies typically grow faster on average than the blue chips. That outperformance comes with a price, however, as there are occasional periods of higher volatility. The last 12 months is one of those periods, as the Russell 2000 ETF (IWM) has underperformed the larger S&P 500 ETF (SPY) by more than 10 percentage points. Given that the funds we track tend to have a disproportionate amount of their portfolios in smaller cap stocks, they have seen some volatility in their portfolios too. Actually their moves are potentially one of the factors that contributed to this volatility. In this article, we use our extensive database of hedge fund holdings to find out what the smart money thinks of The Boeing Company (NYSE:BA).

Is The Boeing Company (NYSE:BA) a healthy stock for your portfolio? The best stock pickers are getting more optimistic. The number of bullish hedge fund bets moved up by 3 in recent months. Overall hedge fund sentiment towards Boeing currently sits its all time high. Our calculations also showed that BA ranks 26th among the 30 most popular stocks among hedge funds. BA was in 74 hedge funds’ portfolios at the end of June. There were 71 hedge funds in our database with BA holdings at the end of the previous quarter.

To the average investor there are a large number of metrics shareholders put to use to appraise stocks. A couple of the most innovative metrics are hedge fund and insider trading signals. Our researchers have shown that, historically, those who follow the top picks of the elite investment managers can trounce the broader indices by a solid amount (see the details here).

Unlike some fund managers who are betting on Dow reaching 40000 in a year, our long-short investment strategy doesn’t rely on bull markets to deliver double digit returns. We only rely on hedge fund buy/sell signals. Let’s analyze the key hedge fund action regarding The Boeing Company (NYSE:BA).

How are hedge funds trading The Boeing Company (NYSE:BA)? 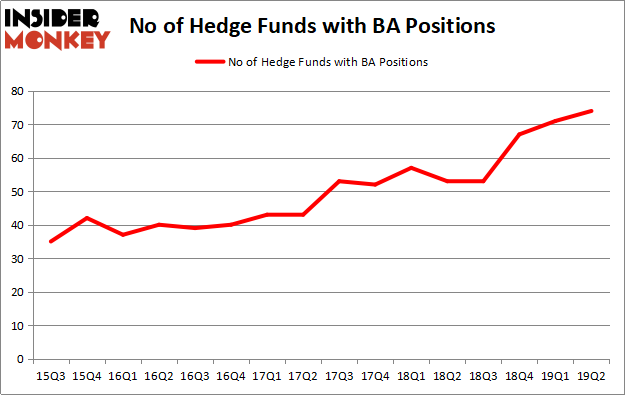 When looking at the institutional investors followed by Insider Monkey, Viking Global, managed by Andreas Halvorsen, holds the most valuable position in The Boeing Company (NYSE:BA). Viking Global has a $1.0109 billion position in the stock, comprising 4.5% of its 13F portfolio. The second largest stake is held by Citadel Investment Group, led by Ken Griffin, holding a $616.8 million call position; 0.3% of its 13F portfolio is allocated to the company. Some other hedge funds and institutional investors that hold long positions consist of Peter Rathjens, Bruce Clarke and John Campbell’s Arrowstreet Capital, Cliff Asness’s AQR Capital Management and Phill Gross and Robert Atchinson’s Adage Capital Management.

Let’s check out hedge fund activity in other stocks – not necessarily in the same industry as The Boeing Company (NYSE:BA) but similarly valued. We will take a look at Oracle Corporation (NYSE:ORCL), Comcast Corporation (NASDAQ:CMCSA), China Mobile Limited (NYSE:CHL), and PepsiCo, Inc. (NASDAQ:PEP). This group of stocks’ market values resemble BA’s market value.

As you can see these stocks had an average of 53.75 hedge funds with bullish positions and the average amount invested in these stocks was $4035 million. That figure was $5122 million in BA’s case. Comcast Corporation (NASDAQ:CMCSA) is the most popular stock in this table. On the other hand China Mobile Limited (NYSE:CHL) is the least popular one with only 13 bullish hedge fund positions. The Boeing Company (NYSE:BA) is not the most popular stock in this group but hedge fund interest is still way above average. Our calculations showed that top 20 most popular stocks among hedge funds returned 24.4% in 2019 through September 30th and outperformed the S&P 500 ETF (SPY) by 4 percentage points. Hedge funds were also right about betting on BA as the stock returned 5.2% during the third quarter and outperformed the market as well.

US Equities: Resilient Force or Case Study in Denial?
Monthly Newsletter Strategy
Download a free copy of our newsletter and see the details inside!
Hedge Fund Resource Center
Related News
Locust Wood Capital Advisers’ Return, AUM, and Holdings (Part II) Hedge Funds Have Never Been This Bullish On The Boeing Company (BA) 30 Most Popular Stocks Among Hedge Funds in Q1 of 2019 Boeing, Alphabet, Tesla, and More: Why These Stocks Are in the Spotlight 5 Ways Hedge Funds Are Playing the Space Trend How the Smart Money is Playing This Trillion Dollar Opportunity These Five Stocks Are Trending 10 Biggest Companies That Offer Pensions 15 Wealthiest Families in the World vs. First Generation Ultra Billionaires 5 Makeup Companies that Don’t Test on Animals
Billionaire Hedge Funds