Hedge Funds Have Never Been This Bullish On TELUS Corporation (TU)

Is TELUS Corporation (NYSE:TU) a good stock to buy right now? We at Insider Monkey like to examine what billionaires and hedge funds think of a company before doing days of research on it. Given their 2 and 20 payment structure, hedge funds have more incentives and resources than the average investor. The funds have access to expert networks and get tips from industry insiders. They also have numerous Ivy League graduates and MBAs. Like everyone else, hedge funds perform miserably at times, but their consensus picks have historically outperformed the market after risk adjustments.

Is TELUS Corporation (NYSE:TU) going to take off soon? Investors who are in the know are betting on the stock. The number of long hedge fund bets increased by 2 in recent months. Our calculations also showed that TU isn’t among the 30 most popular stocks among hedge funds.

Heading into the second quarter of 2019, a total of 13 of the hedge funds tracked by Insider Monkey were long this stock, a change of 18% from the previous quarter. Below, you can check out the change in hedge fund sentiment towards TU over the last 15 quarters. So, let’s find out which hedge funds were among the top holders of the stock and which hedge funds were making big moves. 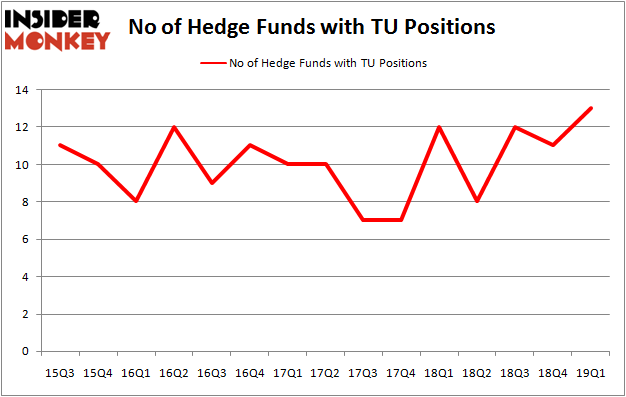 Among these funds, Renaissance Technologies held the most valuable stake in TELUS Corporation (NYSE:TU), which was worth $210.2 million at the end of the first quarter. On the second spot was GLG Partners which amassed $35.9 million worth of shares. Moreover, D E Shaw, Arrowstreet Capital, and Millennium Management were also bullish on TELUS Corporation (NYSE:TU), allocating a large percentage of their portfolios to this stock.

Consequently, key hedge funds have been driving this bullishness. PDT Partners, managed by Peter Muller, created the most outsized position in TELUS Corporation (NYSE:TU). PDT Partners had $1.6 million invested in the company at the end of the quarter. Minhua Zhang’s Weld Capital Management also made a $0.8 million investment in the stock during the quarter. The following funds were also among the new TU investors: Dmitry Balyasny’s Balyasny Asset Management and George Zweig, Shane Haas and Ravi Chander’s Signition LP.

As you can see these stocks had an average of 36.75 hedge funds with bullish positions and the average amount invested in these stocks was $1702 million. That figure was $336 million in TU’s case. Centene Corp (NYSE:CNC) is the most popular stock in this table. On the other hand Verisk Analytics, Inc. (NASDAQ:VRSK) is the least popular one with only 20 bullish hedge fund positions. Compared to these stocks TELUS Corporation (NYSE:TU) is even less popular than VRSK. Hedge funds dodged a bullet by taking a bearish stance towards TU. Our calculations showed that the top 20 most popular hedge fund stocks returned 6.2% in Q2 through June 19th and outperformed the S&P 500 ETF (SPY) by nearly 3 percentage points. Unfortunately TU wasn’t nearly as popular as these 20 stocks (hedge fund sentiment was very bearish); TU investors were disappointed as the stock returned 0.2% during the same time frame and underperformed the market. If you are interested in investing in large cap stocks with huge upside potential, you should check out the top 20 most popular stocks among hedge funds as 13 of these stocks already outperformed the market so far in the second quarter.