Hedge Funds Have Never Been This Bullish On Teekay LNG Partners L.P. (TGP)

The latest 13F reporting period has come and gone, and Insider Monkey is again at the forefront when it comes to making use of this gold mine of data. We at Insider Monkey have plowed through 752 13F filings that hedge funds and well-known value investors are required to file by the SEC. The 13F filings show the funds’ and investors’ portfolio positions as of September 30th. In this article we look at what those investors think of Teekay LNG Partners L.P. (NYSE:TGP).

Teekay LNG Partners L.P. (NYSE:TGP) shareholders have witnessed an increase in support from the world’s most elite money managers recently. Our calculations also showed that TGP isn’t among the 30 most popular stocks among hedge funds (click for Q3 rankings and see the video below for Q2 rankings).

We leave no stone unturned when looking for the next great investment idea. For example Discover is offering this insane cashback card, so we look into shorting the stock. One of the most bullish analysts in America just put his money where his mouth is. He says, “I’m investing more today than I did back in early 2009.” So we check out his pitch. We read hedge fund investor letters and listen to stock pitches at hedge fund conferences. We even check out this option genius’ weekly trade ideas. This December we recommended Adams Energy  based on an under-the-radar fund manager’s investor letter and the stock gained 20 percent. We’re going to take a gander at the fresh hedge fund action regarding Teekay LNG Partners L.P. (NYSE:TGP).

Heading into the fourth quarter of 2019, a total of 10 of the hedge funds tracked by Insider Monkey were long this stock, a change of 11% from the second quarter of 2019. Below, you can check out the change in hedge fund sentiment towards TGP over the last 17 quarters. With the smart money’s sentiment swirling, there exists a select group of noteworthy hedge fund managers who were increasing their holdings meaningfully (or already accumulated large positions). 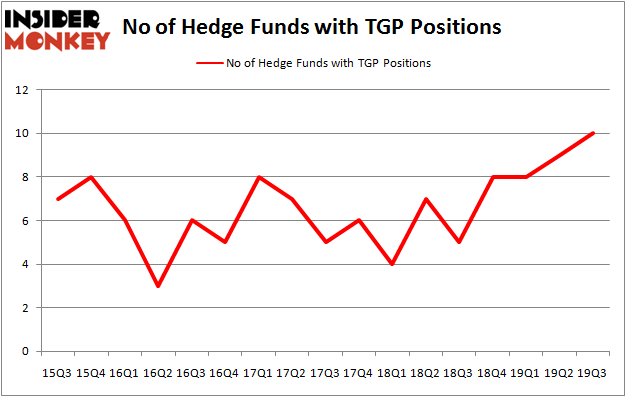 According to Insider Monkey’s hedge fund database, David Einhorn’s Greenlight Capital has the biggest position in Teekay LNG Partners L.P. (NYSE:TGP), worth close to $11.6 million, comprising 0.8% of its total 13F portfolio. The second largest stake is held by Cobalt Capital Management, led by Wayne Cooperman, holding a $11.2 million position; the fund has 4.4% of its 13F portfolio invested in the stock. Some other peers that hold long positions contain Chuck Royce’s Royce & Associates, Peter Rathjens, Bruce Clarke and John Campbell’s Arrowstreet Capital and Matthew Hulsizer’s PEAK6 Capital Management. In terms of the portfolio weights assigned to each position Cobalt Capital Management allocated the biggest weight to Teekay LNG Partners L.P. (NYSE:TGP), around 4.45% of its 13F portfolio. Greenlight Capital is also relatively very bullish on the stock, earmarking 0.83 percent of its 13F equity portfolio to TGP.

Let’s check out hedge fund activity in other stocks – not necessarily in the same industry as Teekay LNG Partners L.P. (NYSE:TGP) but similarly valued. We will take a look at Franks International NV (NYSE:FI), First Bancorp (NASDAQ:FBNC), Navigant Consulting, Inc. (NYSE:NCI), and The E.W. Scripps Company (NASDAQ:SSP). This group of stocks’ market valuations are similar to TGP’s market valuation.

As you can see these stocks had an average of 14.75 hedge funds with bullish positions and the average amount invested in these stocks was $88 million. That figure was $44 million in TGP’s case. The E.W. Scripps Company (NASDAQ:SSP) is the most popular stock in this table. On the other hand Franks International NV (NYSE:FI) is the least popular one with only 11 bullish hedge fund positions. Compared to these stocks Teekay LNG Partners L.P. (NYSE:TGP) is even less popular than FI. Hedge funds clearly dropped the ball on TGP as the stock delivered strong returns, though hedge funds’ consensus picks still generated respectable returns. Our calculations showed that top 20 most popular stocks among hedge funds returned 37.4% in 2019 through the end of November and outperformed the S&P 500 ETF (SPY) by 9.9 percentage points. A small number of hedge funds were also right about betting on TGP as the stock returned 13.2% during the fourth quarter (through the end of November) and outperformed the market by an even larger margin.