Hedge Funds Have Never Been This Bullish On Synthorx, Inc. (THOR)

With the first-quarter round of 13F filings behind us it is time to take a look at the stocks in which some of the best money managers in the world preferred to invest or sell heading into the second quarter. One of these stocks was Synthorx, Inc. (NASDAQ:THOR).

Synthorx, Inc. (NASDAQ:THOR) shareholders have witnessed an increase in hedge fund sentiment lately. THOR was in 7 hedge funds’ portfolios at the end of the second quarter of 2019. There were 5 hedge funds in our database with THOR holdings at the end of the previous quarter. Our calculations also showed that THOR isn’t among the 30 most popular stocks among hedge funds (see the video below). 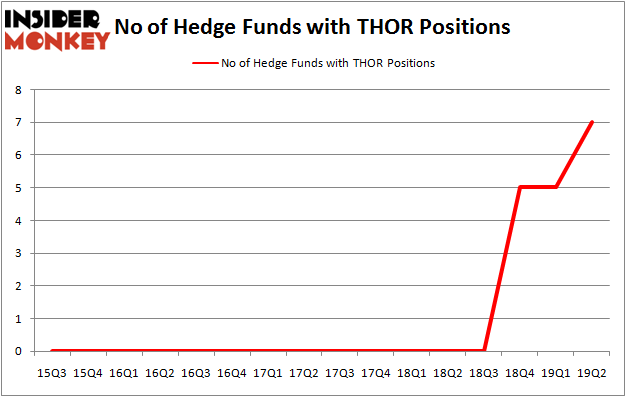 Unlike former hedge manager, Dr. Steve Sjuggerud, who is convinced Dow will soar past 40000, our long-short investment strategy doesn’t rely on bull markets to deliver double digit returns. We only rely on hedge fund buy/sell signals. Let’s take a look at the fresh hedge fund action regarding Synthorx, Inc. (NASDAQ:THOR).

What have hedge funds been doing with Synthorx, Inc. (NASDAQ:THOR)?

The largest stake in Synthorx, Inc. (NASDAQ:THOR) was held by RA Capital Management, which reported holding $131.4 million worth of stock at the end of March. It was followed by OrbiMed Advisors with a $71.8 million position. Other investors bullish on the company included Camber Capital Management, Opaleye Management, and Berylson Capital Partners.

As industrywide interest jumped, specific money managers have been driving this bullishness. Citadel Investment Group, managed by Ken Griffin, assembled the most outsized position in Synthorx, Inc. (NASDAQ:THOR). Citadel Investment Group had $0.8 million invested in the company at the end of the quarter. Parvinder Thiara’s Athanor Capital also initiated a $0.3 million position during the quarter.

As you can see these stocks had an average of 6.75 hedge funds with bullish positions and the average amount invested in these stocks was $27 million. That figure was $233 million in THOR’s case. BioSpecifics Technologies Corp. (NASDAQ:BSTC) is the most popular stock in this table. On the other hand Loop Industries, Inc. (NASDAQ:LOOP) is the least popular one with only 1 bullish hedge fund positions. Synthorx, Inc. (NASDAQ:THOR) is not the most popular stock in this group but hedge fund interest is still above average. Our calculations showed that top 20 most popular stocks among hedge funds returned 24.4% in 2019 through September 30th and outperformed the S&P 500 ETF (SPY) by 4 percentage points. Hedge funds were also right about betting on THOR as the stock returned 20.4% during the third quarter and outperformed the market. Hedge funds were rewarded for their relative bullishness.

Hedge Funds Are Buying ArcBest Corp (ARCB)
Monthly Newsletter Strategy
Download a free copy of our newsletter and see the details inside!
Hedge Fund Resource Center
Related News
Hedge Funds Have This To Say About Thoratec Corporation (THOR) “Index Effects” Do Not Disappoint Its Believers; This is What Hedge Funds Have to Say about S&P 500’s New Addition Why You Should Hold Your Bets On the St. Jude Medical, Inc. (STJ) and Thoratec Corporation (THOR) Merger Kris Jenner’s Rock Springs Capital Rides Healthcare Stocks to Big Q1 Gains West Pharmaceutical Services Inc. (WST): Hedge Funds Aren’t Crazy About It, Insider Sentiment Unchanged This Metric Says You Are Smart to Buy Haemonetics Corporation (HAE) Hill-Rom Holdings, Inc. (HRC): Here is What Hedge Funds and Insiders Think About 11 Largest Auto Insurance Companies In The US In 2019 10 Poorest Cities in America in 2019 8 Lowest Tar and Nicotine Cigarette Brands in 2019
Billionaire Hedge Funds