In these volatile markets we scrutinize hedge fund filings to get a reading on which direction each stock might be going. Hedge Funds and other institutional investors have just completed filing their 13Fs with the Securities and Exchange Commission, revealing their equity portfolios as of the end of December. At Insider Monkey, we follow nearly 835 active hedge funds and notable investors and by analyzing their 13F filings, we can determine the stocks that they are collectively bullish on. One of their picks is Starbucks Corporation (NASDAQ:SBUX), so let’s take a closer look at the sentiment that surrounds it in the current quarter.

Starbucks Corporation (NASDAQ:SBUX) has experienced an increase in hedge fund interest lately. SBUX was in 66 hedge funds’ portfolios at the end of the fourth quarter of 2019. There were 59 hedge funds in our database with SBUX holdings at the end of the previous quarter. Our calculations also showed that SBUX isn’t among the 30 most popular stocks among hedge funds (click for Q4 rankings and see the video at the end of this article for Q3 rankings).

We leave no stone unturned when looking for the next great investment idea. For example, this trader is claiming triple digit returns, so we check out his latest trade recommendations. Federal Reserve and Central Banks all around world are printing money like there is no tomorrow, so we check out this this precious metals expert’s stock pick. We read hedge fund investor letters and listen to stock pitches at hedge fund conferences (by the way watch this video if you want to hear one of the best healthcare hedge fund manager’s coronavirus analysis). Our best call in 2020 was shorting the market when S&P 500 was trading at 3150 after realizing the coronavirus pandemic’s significance before most investors. Now let’s check out the latest hedge fund action regarding Starbucks Corporation (NASDAQ:SBUX).

What have hedge funds been doing with Starbucks Corporation (NASDAQ:SBUX)?

Heading into the first quarter of 2020, a total of 66 of the hedge funds tracked by Insider Monkey were long this stock, a change of 12% from the third quarter of 2019. Below, you can check out the change in hedge fund sentiment towards SBUX over the last 18 quarters. With hedgies’ sentiment swirling, there exists a few notable hedge fund managers who were boosting their stakes considerably (or already accumulated large positions). 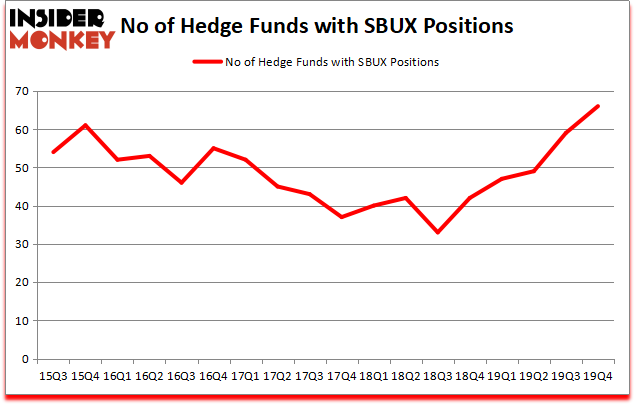 More specifically, Arrowstreet Capital was the largest shareholder of Starbucks Corporation (NASDAQ:SBUX), with a stake worth $862.8 million reported as of the end of September. Trailing Arrowstreet Capital was Cedar Rock Capital, which amassed a stake valued at $775 million. Pershing Square, Two Sigma Advisors, and Renaissance Technologies were also very fond of the stock, becoming one of the largest hedge fund holders of the company. In terms of the portfolio weights assigned to each position Cedar Rock Capital allocated the biggest weight to Starbucks Corporation (NASDAQ:SBUX), around 17.54% of its 13F portfolio. Pacifica Capital Investments is also relatively very bullish on the stock, earmarking 15.77 percent of its 13F equity portfolio to SBUX.

As you can see these stocks had an average of 34.5 hedge funds with bullish positions and the average amount invested in these stocks was $6830 million. That figure was $5064 million in SBUX’s case. American Express Company (NYSE:AXP) is the most popular stock in this table. On the other hand Diageo plc (NYSE:DEO) is the least popular one with only 17 bullish hedge fund positions. Compared to these stocks Starbucks Corporation (NASDAQ:SBUX) is more popular among hedge funds. Our calculations showed that top 10 most popular stocks among hedge funds returned 41.4% in 2019 and outperformed the S&P 500 ETF (SPY) by 10.1 percentage points. These stocks lost 1.0% in 2020 through April 20th and still beat the market by 11 percentage points. Unfortunately SBUX wasn’t nearly as popular as these 10 stocks and hedge funds that were betting on SBUX were disappointed as the stock returned -13.9% during the three months of 2020 (through April 20th) and underperformed the market. If you are interested in investing in large cap stocks with huge upside potential, you should check out the top 10 most popular stocks among hedge funds as most of these stocks already outperformed the market in 2020.