Hedge Funds Have Never Been This Bullish On SolarWinds Corporation (SWI)

Is SolarWinds Corporation (NYSE:SWI) a good stock to buy right now? We at Insider Monkey like to examine what billionaires and hedge funds think of a company before spending days of research on it. Given their 2 and 20 payment structure, hedge funds have more incentives and resources than the average investor. The funds have access to expert networks and get tips from industry insiders. They also have numerous Ivy League graduates and MBAs. Like everyone else, hedge funds perform miserably at times, but their consensus picks have historically outperformed the market after risk adjustments.

Is SolarWinds Corporation (NYSE:SWI) a buy here? The best stock pickers are getting more optimistic. The number of bullish hedge fund bets moved up by 7 recently. Our calculations also showed that SWI isn’t among the 30 most popular stocks among hedge funds (view the video below).

In the financial world there are tons of methods market participants use to value publicly traded companies. A couple of the less known methods are hedge fund and insider trading activity. Our experts have shown that, historically, those who follow the best picks of the best money managers can outperform their index-focused peers by a significant margin (see the details here). 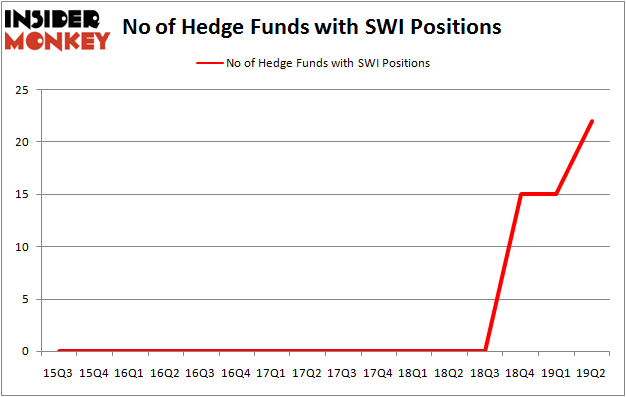 Unlike some fund managers who are betting on Dow reaching 40000 in a year, our long-short investment strategy doesn’t rely on bull markets to deliver double digit returns. We only rely on hedge fund buy/sell signals. Let’s take a gander at the key hedge fund action surrounding SolarWinds Corporation (NYSE:SWI).

How have hedgies been trading SolarWinds Corporation (NYSE:SWI)?

Of the funds tracked by Insider Monkey, Jim Davidson, Dave Roux and Glenn Hutchins’s Silver Lake Partners has the number one position in SolarWinds Corporation (NYSE:SWI), worth close to $2.3863 billion, amounting to 58.6% of its total 13F portfolio. Coming in second is Will Cook of Sunriver Management, with a $35.7 million position; the fund has 7.3% of its 13F portfolio invested in the stock. Some other hedge funds and institutional investors that are bullish contain Peter Rathjens, Bruce Clarke and John Campbell’s Arrowstreet Capital, Alexander Captain’s Cat Rock Capital and Anand Parekh’s Alyeska Investment Group.

As one would reasonably expect, some big names have been driving this bullishness. Cat Rock Capital, managed by Alexander Captain, created the biggest position in SolarWinds Corporation (NYSE:SWI). Cat Rock Capital had $15.1 million invested in the company at the end of the quarter. Vikas Lunia’s Lunia Capital also initiated a $8.4 million position during the quarter. The other funds with new positions in the stock are Bernard Selz’s Selz Capital, Andrew Feldstein and Stephen Siderow’s Blue Mountain Capital, and Paul Marshall and Ian Wace’s Marshall Wace LLP.

As you can see these stocks had an average of 23.75 hedge funds with bullish positions and the average amount invested in these stocks was $293 million. That figure was $2526 million in SWI’s case. RealPage, Inc. (NASDAQ:RP) is the most popular stock in this table. On the other hand Penumbra Inc (NYSE:PEN) is the least popular one with only 19 bullish hedge fund positions. SolarWinds Corporation (NYSE:SWI) is not the least popular stock in this group but hedge fund interest is still below average. This is a slightly negative signal and we’d rather spend our time researching stocks that hedge funds are piling on. Our calculations showed that top 20 most popular stocks among hedge funds returned 24.4% in 2019 through September 30th and outperformed the S&P 500 ETF (SPY) by 4 percentage points. Unfortunately SWI wasn’t nearly as popular as these 20 stocks (hedge fund sentiment was quite bearish); SWI investors were disappointed as the stock returned 0.6% during the third quarter and underperformed the market. If you are interested in investing in large cap stocks with huge upside potential, you should check out the top 20 most popular stocks among hedge funds as many of these stocks already outperformed the market so far in 2019.